London Underground (LU) is one of the oldest and busiest metro systems in the world. The system opened in 1863 and today carries 1.37 billion passengers a year as its trains travel 83.6 million kilometres.

There are 270 stations – the busiest is Waterloo, which handles 100.3 million passengers per year and it has 23 of the system’s 423 escalators to help it cope.

The network is 402km long and, while many consider it as ‘the underground’, 55 per cent of the network runs above ground. The longest continuous tunnel is between East Finchley and Morden (via Bank) at 27.8km.

Often taken for granted, though, is that the 45 per cent of the network which is underground requires a reliable and efficient lighting system, both in stations and in running tunnels for maintenance and for use in emergencies. The surface stations also require lighting as, when maintenance is taken into account, the network is in use 24 hours a day.

Unlike ordinary incandescent bulbs, LEDs do not have a filament that burns out, so they don’t get especially hot. They are illuminated solely by the movement of electrons in a semiconductor material, and they last just as long as a transistor. An LED is simply a diode that is designed to give off light.

When an LED is forward-biased, so that electrons and holes are travelling back and forth across a silicon junction, they are constantly combining and wiping one another out. As an electron moves from n-type into the p-type silicon, it will combine with a hole and disappear. This makes an atom complete and stable, and it gives off a little burst of energy in the form of a tiny photon of light.

Compared to an incandescent bulb, LEDs don’t get as hot, consume less electric current and last a lot longer, with the lifespan of an LED surpassing the short life of an incandescent bulb by thousands of hours. The adoption of LED lighting on the London Underground, though, is not simply about reduced carbon or heat emission, nor the saving on energy bills – although these are important welcome benefits. The main whole-life cost advantage is maintenance savings, and the high cost of changing light fittings on the underground driving the shift towards ‘fit for purpose’ LED products.

Replacing existing LU lighting with LEDs can deliver energy savings in the region of 20 to 40 per cent, but these savings are still lower than those that can be made on maintenance, estimated to be up to 50 per cent of the whole-life cost of the asset. Most LED lighting products come with a warranty of five years or more, so, while an LED fitting might sound initially more expensive, the maintenance savings over the (typically) five-year design life can be quite significant when compared with existing fluorescent lighting which has a design life of only around 18 months.

Changing light fittings above busy underground escalators, for example, is a particularly challenging and costly activity, which can cost thousands for just one lamp, albeit planned re-lamping activities would normally be implemented in large areas/zones to save cost. However, ensuring that a safe level of light is provided at all times means it can be unsafe to wait for several lamps to fail before an intervention has to take place.

The upfront cost of lighting equipment, and the ongoing cost of energy, pales into insignificance next to the labour costs associated with maintenance. So, there is no point in upgrading to another technology if there is no saving on the labour cost, one reason why backwards compatibility of the light fittings is important.

One thing that has not helped maintenance over the years is the sheer number of different types and sizes of light fittings, supplied by multiple manufacturers. This may have made short term sense to the procurement teams of the individual lighting renewal projects, but it is a long-term asset management problem, requiring a large inventory of spares. Also, the knowledge of which fittings were used often resides with the electrical engineer who supported the installation and/or the local maintenance technician who has just retired!

To address this issue, London Underground has introduced ‘category management’, with the intent to standardise on products demonstrating the best whole lifecycle cost within stations. This approach has initially been implemented for lighting products, with no more than three contracted framework suppliers for each of the 13 categories of lighting currently allowed. The categories include, for example, linear, square, downlight, bulkhead and column lighting of different sizes.

The contract arrangements require the provision of lighting units to be backwards compatible with supplied fittings, together with technical support through the course of the contract, innovation, and for changes to technology and equipment to be implemented in a controlled fashion. Eight more categories are to be created to account for all the variations of equipment types that have been identified.

As well as lasting longer, LED tubes have the advantage that they can be cleaned more easily. Fluorescent tubes, on the other hand, are difficult to clean safely, and are simply thrown away and replaced when they get dirty.

LEDs have been used on the underground, in varying degrees, for about eight years, with around 10 to 15 per cent of the network already changed. However, such is the size of the task that, due to access, budget and resource constraints, it will take several years to reap the benefits of LEDs fully.

While delivering the benefits of reduced maintenance bills and energy costs, the change to LED lights also brings an improvement in light quality and contributes to customer satisfaction and improved safety. Customers at stations include those who may be carrying lots of luggage, or they may be older people, or people with young children. So improved lighting delivers a safety benefit, helping to stop people tripping over or having accidents because they didn’t see something.

Keeping the lights on

Each underground station has two independent power supplies, one from the local domestic network operator and another derived from the underground’s own secure power distribution system. Where required, this is supplemented with emergency power supplies in the form of offline battery invertors (OLBI), uninterruptible power supplies (UPS) or self-contained battery fittings to provide emergency lighting.

The design of the lighting distribution cabling and protection arrangements is such that, in the event of a failure of one of the systems, there will still be sufficient light for the underground to operate safely. Emergency lighting provided by the OLBI/UPS will be held off until both systems fail, at which point the emergency lighting will operate to support safe evacuation.

The platforms are lit to 150 lux, and all other areas to 100 lux, with no additional lighting required for CCTV as modern systems are sensitive enough to operate at these levels.

The running tunnels between underground stations are not normally lit. However, in the event of the traction current supply being turned off, or tripped in a failure mode, the tunnel lighting will automatically be turned on by relay control circuitry. Tunnel lighting is fed from adjacent stations along with interleaved cabling to provide further resilience against total failure.

In staff areas, savings are possible if the lights are turned off or the illumination level reduced when no one is present. Sensors or movement detectors that simply switch off lights could be used for this purpose. However, this could present a safety hazard in equipment rooms if someone was plunged into total darkness, especially if they were working on electrical apparatus at the time.

This is where modern lighting control systems come in, as these are able to reduce the light level in a controlled manner, taking into account the occupancy, the type of room and its usage. Occupants can then take action, if they are not in range of a sensor, to restore the lighting level before it is reduced to zero.

Reducing lighting levels in quiet public areas could alarm passengers, and so are not used.

On surface stations, the lighting arrangements are similar to those on the mainline rail network. In some stations, resilience to failure is mitigated with either self-contained fittings or centralised emergency battery arrangements. When these are renewed, whether to provide either local or centralised batteries, is decided on a case by case basis, taking into account the overall asset condition of the cabling, cable containment systems and light fittings.

With its wealth of experience in lighting dark and underground spaces, Transport for London is taking the lead in a pan-European initiative known as PRO-LITE (Procurement of Lighting Innovation and Technology in Europe). Co-funded by the European Commission, specifically under the ‘Supporting Public Procurement of Innovative Solutions: Networking and financing Procurement’ framework, it involves commercial, engineering and maintenance teams collaborating to find lighting products that will cost substantially less over the product’s entire life (whole-life costs).

It is hoped that this approach will inspire manufacturers to design products that will create optimal whole-life costs and deliver high performance across the TfL network.

Together, the PRO-LITE partners will collectively spend over €1.5 billion for both lighting products and associated services. In addition to TfL, which is naturally focussing on lighting for transport networks, the other partners are:

So next time you travel through the underground, look up (when it is safe to do so) and consider all the technology, careful design, international cooperation and resource that is used to keep the lights on.

The international unit of measurement of light level is the lux, which is equivalent to lumens per square metre. The lux is used to measure the intensity of light hitting a surface, typically a wall or floor in a lighting design

100 lux – Sufficient for lifts, corridors, stairs and areas that are transitory for occupants and don’t require any detailed work. Also warehouse areas and bulk stores. Not bright enough to read a book, but good enough for people to get around without injuring themselves and see where they are going.

150 lux – Restrooms and plant rooms. This is the level used by London Underground for platforms and which provides an adequate level of light for people to join and alight safely from trains.

200 lux – Entrance areas and lobbies require this level of light, and it is also the minimum for a restaurant dining area.

500 lux – Retail spaces should have this as a minimum light level, as should general office spaces. This level should be suitable for prolonged work on computers, machinery and reading. 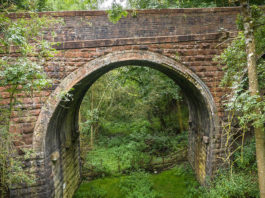 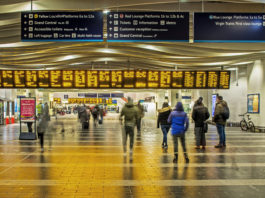 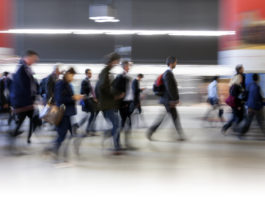 Towards the inclusive railway