As world leaders meet at the 26th UN Climate Change conference (COP26), RSSB is spotlighting the challenges—and opportunities—of moving to sustainable rail. In our first piece we focus on traction.

A key characteristic of trains is that they tend to follow the same routes. This gives rail a huge head start on the journey to Net Zero. While other transport types must carry their own fuel, trains can use electricity generated elsewhere—something that has been done for a long time. The world’s oldest operational electrified railway opened in Brighton in 1883: weather permitting, you can still take a trip on it today. /

For most of GB rail’s history, trains have used fossil fuel—from the coal-powered steam engines to the diesel we still use on 62% of the network. But long experience of electrification, and the mature technologies already developed, now stand the industry in good stead.

In 2019 the UK Government became one of the first in the world to set a legally binding greenhouse gas emissions target of zero, to be achieved by 2050, with Scotland pledging the same by 2045 and Wales committing to a 95% reduction by 2045.

In Net Zero Strategy: Build Back Greener (19 October 2021), the UK Government reiterated its commitment: “The rail network will be net zero emissions by 2050 through a sustained, long‑term programme of investment in rail electrification, supported by deployment of battery and hydrogen-powered trains.”

2019 calculations confirmed that transportation accounted for no less than 34% of overall emissions, up 6% since 2013. Increases in the numbers travelling, and distances travelled, had more than cancelled out improvements in fuel efficiency. This makes decarbonising UK transport a matter of urgency if we are to reach Net Zero on time.

In absolute terms, the rail industry has a significant carbon footprint. A 2020 study called DECARB – Carbon Measurements (T1197), commissioned by RSSB and led by Carbon Intelligence, calculated that rail was responsible for approximately 9.5 million tonnes of CO2e* each year, including direct and indirect emissions.

But as a mode of transportation, it’s inherently low carbon: while 10% of all distance travelled in this country in 2018 was by rail, the industry accounted for just 1.4% of transport emissions. Rail freight is key to zero carbon logistics: every freight train takes around 76 HGVs off the road, while emitting only a quarter of the CO2e per tonne-mile travelled compared to HGVs.

What’s more, there are currently no market-ready solutions for decarbonising air freight and shipping at scale. And while there are solutions for passenger cars and vans, these involve substantial costs. For all cars and vans to go electric by 2050, we’ll need 210,000 public chargers (there are only 25,000 right now), plus 3,500 rapid/ultra-rapid ones near motorways, as well as massive battery recycling facilities. As for long distance HGVs, the Government will trial ‘e-highways’ with overhead electric lines, but this is at an early stage. Hydrogen’s another possibility¬¬—but it could require up to 800 freight refuelling stations by 2050.

So decarbonising rail traction can help with the bigger picture in two ways. Firstly, it will reduce the industry’s own emissions. But more importantly, it can help encourage modal shift to low carbon public transport. Rail can move from being a small part of the problem to a large part of the solution.

As diesel accounts for the lion’s share of direct traction emissions, our ambition is to eliminate diesel-only traction long before 2050.

Electrification is simply the best way to run high-speed, long-distance services and heavy freight trains—apart from diesel, no other available form of traction is capable of delivering these services. Electrified lines can carry more traffic than any other form of traction, so you get a capacity boost too.

About two fifths of the network is already electrified. Expansions included in the WilliamsShapps Plan for Rail, and RSSB’s working with the Government to help turn these public policy aspirations into reality. The backbone of this plan will be an ambitious programme, guided by Network Rail’s Traction Decarbonisation Network Strategy (TDNS), and covering most of the network.

In theory, we could simply electrify everything—but this presents real technical, logistical and financial challenges. It requires building and maintaining expensive infrastructure, meaning that it’s unlikely to be cost-effective for some parts of the network. So what can we do to bridge the gaps?

Hydrogen and battery trains may work for less busy lines, as these avoid the need to install and maintain electrification infrastructure.

As well as making technological improvements to engines to reduce emissions, battery-diesel hybrid trains will help in the short-term. The industry’s currently testing trains from Vivarail and Porterbrook, which will reduce both fuel consumption and noise, and eliminate exhaust emissions at stations in battery mode.

Bi-mode trains (which use electricity where they can and diesel where they can’t) are already reducing overall emissions. Various studies, including a recent RSSB/Loughborough University project, have showed that relatively little investment into measures like smart controllers, driver efficiency training, and specific track improvements could further reduce bi-mode emissions by 19%.

Hydrogen trains are also in development: in September 2020, HydroFLEX became the first-ever hydrogen-powered train to run on the UK mainline, closely followed by others.

We must implement the most cost-effective options without reducing capacity and reliability. It’s vital that public policy makers don’t lose sight of the importance of accelerating electrification. The limited roles hydrogen and battery can play don’t water down the case. The point is to decarbonise.

Bringing the nation on our journey

Decarbonising rail traction is a big investment. As an industry, rail will need to demonstrate a big return. So it’s important to see it as part of the bigger Net Zero picture, making the case to policy makers and the public for a modal shift to greener transport.

We will need to answer some tough questions:

How will rail respond to fundamental changes in the world of work? How can we make it cleaner and greener for passengers to reach stations? How should we modernise ticketing to make travel more attractive and convenient?

And how can we electrify freight when it’s currently under commercial pressure to rely on diesel? How can we make the network more freight-friendly, and still accommodate an expansion in passenger numbers? Other transport industries are grappling with their own decisions, many of them more fundamental. But at least for rail, the main technical solution is clear—and has been since 1883.

* Carbon dioxide equivalent (CO2e) is a standard unit that expresses the impact of different types of greenhouse gas in terms of the amount of CO2 that would create the same amount of warming. 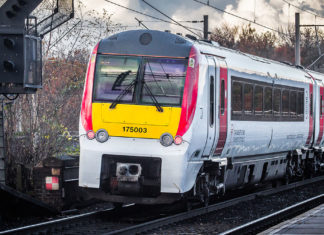 24th January 2022
Transport for Wales (TfW) is celebrating the completion of work to refurbish its fleet of Class 175 long-distance trains. Train manufacturer Alstom has been working...