Of the current orders for 6,000 or so new rail vehicles, destined for routes and operators around the country, only 286 will be diesel powered. When these orders were placed, the future was to be electrification, so it was considered that the demand for diesel trains on rural routes could largely be met by cascaded DMUs that would be released as lines were electrified.

It was also expected that, with additional electrification, the many surplus EMUs displaced by orders for new trains would find homes on other lines. It is now almost certain that such perfectly serviceable EMUs will be scrapped. It would be interesting to know whether the cost of replacing them with diesel trains was considered when electrification schemes were cancelled.

The 286 diesel-powered vehicles on order comprise 140 DMU cars for Northern Rail, 80 DMU cars for West Midlands and 66 locomotive-hauled coaches for First TransPennine Express, all of which are being produced by CAF of Spain. The DMUs are from its Civity family of regional trains and the coaches are Mark 5 coaches similar to those that CAF is currently producing for Caledonian Sleeper.

Construcciones y Auxiliar de Ferrocarriles (CAF) has its origins in 1892 when an iron works in the Basque town of Beasain was converted into an industrial workshop to manufacture and repair wagons. This became the basis for CAF, which was set up in 1917. After the Spanish Civil War, the company was heavily involved in the reconstruction of the country’s rail fleet and opened a factory in Irun in 1940 to deal with its expanded workload.

In 1954, CAF acquired a factory at Zaragoza that had manufactured trains, subway trains and trams since 1897. It rebuilt the plant in the early 1970s. Like Alstom in France and Siemens in Germany, CAF benefited from the rail investment boom as a result of the construction of its country’s high-speed network in the 1990s.

CAF has 8,000 employees in Spain, where it now has four manufacturing plants: Beasain, Zaragoza, Irun and Castejón which respectively have covered areas of 181, 93, 21 and 19 thousand square metres. CAF also has factories in France, USA, Brazil and Mexico.

Today, the company has a record order book of €6.3 billion, of which 63 per cent is for new vehicles and the remainder for services and components. The split of orders for new vehicles is: locomotives (4%), high-speed trains (5%), regional trains (43%) and light rail vehicles (48%). The international market accounts for 87 per cent of its orders with 23 per cent of these orders being for UK trains. The company sees Britain to be an important market, having previously manufactured Heathrow Express trains and trams for Edinburgh and Birmingham. As a result, CAF is now building a 46,000 square metre factory in Newport that will employ 300 people and be opened this summer.

The company’s current UK orders are as shown in the table (below). Of these, construction and delivery of the new Caledonian Sleeper coaches is well advanced, with the first trains expected to enter service between Glasgow or Edinburgh and London in October. Some coach and EMU bodyshells have been produced for the TransPennine’s order and construction of Northern Rail’s EMUs and DMUs is well advanced.

Northern Rail’s Class 195 DMUs and Class 331 EMUs are being procured and financed by Eversholt Rail in a £490 million deal, which is one of the biggest orders that CAF has ever received. The contract includes the option to build more coaches to extend the units if specified before a certain date.

One of the key factors in Northern’s choice of CAF as a train builder was its ability to supply DMUs and EMUs of the same train family. For reasons of operational and maintenance, Northern wants its diesel and electric units to be as similar as possible.

Gary Tremble, Northern’s head of engineering, commented that, during the design phase, “CAF were brilliant in handling our requests”. As Gary’s day job is ensuring that the company’s current 1980s-built fleet is maintained, he is clearly looking forward to receiving these new trains and has found it very satisfying to have had a say in their specification.

Ian Hyde, Northern’s head of new trains, explained: “This is a once-in-a-generation chance to significantly improve the quality of rail services in the North; we’re enhancing the overall on-board experience. The introduction of these units will increase our fleet size allowing us to offer more and faster services.”

The age of many of its trains, which date back to the mid-80s and include the bus-like Pacer trains, makes it difficult for Northern to attract customers from their cars. This should change with these new air-conditioned trains that have 24-metre-long coaches with 2+2 seating and seats, which are cantilevered from the side of the coach, complete with armrests. The number of seats in the two, three and four-car units are, respectively, 123, 203 and 284.

Ian also explained that the intention was to provide the largest possible train. This required some standard components to be modified to fit within the UK loading gauge and may require some minor infrastructure alterations. He also advised that the amount of seat padding was determined from a passenger evaluation that considered three options.

The seats are generally aligned to windows and most have tables. Other seats have seat-back tables. There is a power socket between each pair of seats and free Wi-Fi is provided. The passenger counting system is supplied by Dilax, which also provides the seat reservation system displayed above each seat. However, there is a slot at the top of each seatback for reservation labels if required.

The electrically powered double-leaf sliding plug doors are at 1/3 and 2/3 car door positions and have large vestibules to provide good movement within the coach to minimise dwell times. For stations with short platforms, there is automatic selective door opening.

Each unit has one universal-access toilet, adjacent to two wheelchair spaces. Cycle storage is provided behind three fold down seats. The customer information screens are linked to the Darwin system and so can provide real-time information about disruption elsewhere on the network if required.

Other than their power source and drive train, the Class 195 and 331 units are virtually identical. The differences in the bodyshells are from the need to accommodate pantographs and exhaust pipes. In the cab, the only apparent difference is that the engine start button in the Class 195 is replaced by a pantograph button in the 335. As a result, much of the driver training for these two units is common.

The units have automatic power control and, as shown by a blank screen in the cab, passive ETCS provision.

Each of the Class 195 vehicles has an MTU power pack with Daimler 6H 1800 R85L engines that deliver 390kW. The engines have selective catalytic reduction to meet the stringent requirements of the EU stage IIIB emissions directive. ZF supply both the EcoLife six-speed automatic transmission and final drive.

On the Class 331, the driving cab vehicles are the only powered vehicles. Each has two motor bogies powered by 220kW asynchronous traction motors, one on each axle, that are supplied by Traktionssysteme of Austria. The traction control comes from CAF Power and automation and the 2570kVA transformer from ABB.

Both classes of units have Dellner auto-couplers and so can couple to each other. Coupling bars for rescue operations will be kept at strategic locations on the Northern network.

At the end of January, Rail Engineer was invited to tour the Zaragoza plant and see a completed Class 331 unit in EMU in the testing shed. At that time, Zaragoza had completed one 3-car and four 4-car EMUs, whilst Irun had completed one 2-car and six 3-car DMUs.

The tour of the plant started in the body shop, where bodyshell components – including solid aluminium underframes and complex aluminium extrusions supplied from Switzerland – were seen. With the use of conventional MIG welding, grinding to smooth the weld joints was evident.

The assembly line has seven production positions at which windows, wiring, pipework, underframe components and doors were fitted in the correct sequence. It was interesting to note that, once the vehicle’s interior lighting had been fitted, it was used to replace the temporary lighting at the previous position.

CAF’s technical project manager, Ramón Casalé, explains that each car currently spends eight days at each production position, although this will soon be reduced to six days. The assembly shed has two lines, one of which was producing EMUs for Mexico. Once this order is completed, both lines will be used to enable the assembly shed to produce one Northern vehicle every three days.

In the test shed there was an opportunity to examine a gleaming four-car Class 331 that was complete, except for the seat tables. Here, the units will be subject to static testing before sent away for dynamic testing. Ramón explains that, in mid-March, this unit will depart for the Velim test track in the Czech Republic for three month’s type-approval testing.

Other units are expected to start arriving in the UK in May. They come by ship as the 1,668mm Spanish gauge precludes sending the trains by rail to Britain through the Channel Tunnel. The Class 331 is to be tested on the West Coast main line between August and November. The first unit of each type must complete 1,500 miles of fault-free running before acceptance. Once this has been done, other units must clock up 500 fault-free miles.

The first Class 195 is to be sent to Velim and to the Faurei testing centre in Romania before coming to the UK. Without the need for overhead line testing, this diesel unit is expected to obtain its letter of authority to operate before the Class 331 EMU and is expected to enter service in December.

The Class 195 units are expected to be first used on Chester to Leeds services, whilst the first Class 331 units will operate Blackpool to Manchester Airport services. The introduction of these trains, between December and February 2020, will start a cascade process within the Northern fleet that will lead to the withdrawal of the Pacer units.

When the full fleets are deployed, they will give Northern’s commuters forty per cent more seats during peak services. Will these trains also tempt northern drivers out of their cars? On the evidence seen in Zaragoza, this seems likely. 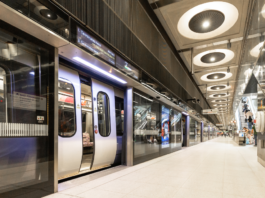 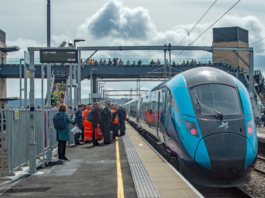 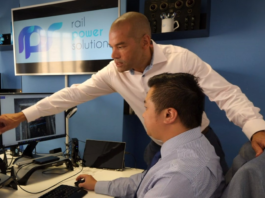