Looking back on London Bridge

As the final pieces of hoarding come down at London Bridge station, engineers, architects, rail operators and PR professionals across the city are thrusting their fists Shard-high in a shared gesture of triumph. It has taken over five years to complete the construction stage of this landmark project, which forms the final Key Output (2) of the £7 billion Thameslink programme, first conceived of way back in 1988.

A highly complex undertaking comprising civil engineering works, new rolling stock and signalling technology, this major capacity upgrade programme will reduce congestion on the Thameslink network by increasing services from 15 to 24 trains per hour. To accommodate 16 of these ‘through’ trains per hour, and enhance the commuting experience for its 49 million annual users, London Bridge station underwent a significant transformation, realigning 15 tracks and platforms and introducing a 92,000 sq ft retail concourse.

As a veteran of the scheme, who oversaw WSP’s contribution to the construction planning, I believe that the success of the London Bridge Redevelopment Project, and the wider Thameslink programme, is due to two things: (1) the commitment to managing complexity through early systems integration, detailed planning and robust design, and (2) the unprecedented level of collaboration across teams, organisations and industries, sustained from the early days of the project through to its completion.

With every major milestone met along the way, the successful completion of the London Bridge Redevelopment Project may seem like a foregone conclusion. However, in 2008, when I first began feasibility work with Network Rail, the objectives and challenges of the project appeared to be irreconcilable. We had to find a way to upgrade the railway and achieve the desired capacity gains while continuing to operate the Thameslink, Southeastern and Southern networks, which provide connections to Luton and Gatwick airports, as well as access to central London routes.

Developing the end state solution of reversing the number of through and terminating platforms (nine through to six terminating) at London Bridge to run the required 16 Thameslink trains per hour was relatively simple; the real complexity was in designing the migration path – a robust sequence of interim ‘configuration states’ and transitions that culminated in the final Key Output 2 system.

To choreograph this intricate dance, the systems engineering team carried out system integration activities at programme and project levels, which integrated key interfaces, performance targets, operational concepts and nearby infrastructure projects. A comprehensive System Migration Plan was developed to show the interaction between the construction sequence at London Bridge, the new depots, rolling stock and train control equipment.

This road map provided instant clarity for the highly complex Thameslink programme, and our approach of applying systems thinking earlier than usual was praised as innovative best practice in the Government’s 2011 McNulty Report ‘Realising the Potential of GB Rail’.

Our next challenge was to create a project programme that enhanced the Thameslink passenger experience without making it significantly worse during construction. For London Bridge, this meant keeping the station operational throughout in order to minimise disruption for passengers and other local stakeholders. The early staging process for the original Thameslink 2000 was nicknamed ‘Magic Carpet’, because there was no precedent for delivering a programme of this size and complexity within five years.

Under the direction of Network Rail project director Mark Somers, the timetabling and passenger demand forecasting and pedestrian modelling teams collaborated with WSP’s track experts, systems engineers and constructability consultants from a very early stage, to explore construction staging options and understand how different scenarios would affect passengers. This included adjusting the operating schedule, stopping patterns, and train dwell times to provide an optimised construction programme with features such as ‘non-stopping’ platforms, which removed the need to create space for passengers where work was being undertaken.

The resulting solution was a railway and station built in phases with a highly synchronised construction programme, organised into nine strategic milestones and over 70 sub-stages. While somewhat inefficient from a construction perspective, progressive handback enabled us to demolish old platforms and progressively reconfigure the tracks, reducing the number of closed platforms to three out of 15 at any one time.

This robust programme gave Network Rail certainty around timescales, minimising timetable changes to only three over the five years. It also contributed to a step-change in passenger communications, enabling operators to plan for and communicate all service disruptions to passengers over the five-year period via social and mainstream media. This much-needed continuity was appreciated by commuters, who could re-plan their journey ahead of time.

Collaborating to create a superior station

From the very beginning, architects, designers, contractors and Network Rail personnel were co-located in a shared office. A system of single discipline and inter-disciplinary checks and reviews was used to manage all interfaces, with formal and ad-hoc meetings, submissions and presentations at key stages and an integrated 3D MicroStation model covering all disciplines. This collaborative team was one of the first to achieve BS11000 certification for collaborative working (now ISO44001).

As an organisation contributing to many different aspects of the London Bridge Redevelopment Project, WSP project team members, including myself, have seen how successful this framework is in enabling different teams and organisations to work together effectively on long, large and complex projects.

In 2011, WSP was appointed to revisit the conceptual design for London Bridge in order to achieve planning permission and develop the scheme design to a level of detail that would enable the award of a design and build contract within 15 months. Conscious of the criticality of the railway construction sequencing to the overall project, the multi-disciplinary team developed ideas originally proposed by the constructability team, such as offsite construction for platforms and the canopied roofs, which would minimise the need for possessions and the risk associated with works near an operational railway.

One of the most significant pieces of design was a new 150 metres x 75 metres wide concourse at street level, which provides the station with a common interchange for the first time in its 182-year history. This eases passenger congestion during peak times with two additional boarding options that allow free passenger movement through the station from street to platform level.

A late stage request to introduce additional retail into the station also benefitted passengers in the long term but complicated our time-constrained design process. Through close collaboration between teams and organisations, and the use of a full multi-discipline 3D BIM model, we were able to design and achieve planning approval for 92,000 sq ft of retail into the concourse, providing significant development value to Network Rail.

WSP’s involvement in designing for the wider London Bridge Quarter, including the Shard, Shard Place, The News Building and the new bus interchange adjacent to the station, enabled us to support a unified vision for the area, providing a positive, integrated experience for local residents, workers and visitors.

Strong collaboration also enabled the project team to achieve the highest ever CEEQUAL sustainability rating at the design stage for London Bridge station. The Thameslink Sustainability Strategy set out sustainability objectives with a number of targets under each objective, one of which was to achieve a CEEQUAL Excellent award for the station. To meet this requirement, WSP chaired a series of workshops attended by representatives of all design disciplines and Network Rail in order to understand opportunities and risks.

Designers from each discipline were responsible for demonstrating their achievement of the CEEQUAL requirements within the design. For example, the Thameslink programme has an aspiration to provide CO2 savings of 77 tonnes per year. However, heating and cooling the newly designed station would be highly carbon intensive if regular temperature control methods were used. Designers collaborated with Network Rail to update standards for lifts and escalators, enabling new, more efficient technologies to be specified.

The canopies were also designed to allow flat, glare-free north light down into the concourse to reduce lighting energy demand during the day. Working with GI Energy, we also drove the use of innovative technology – installing geothermal loops into 145 of the planned piles. These geothermal piles consist of pile foundations combined with two closed-loop ground source heat pump systems which span the length of the pile – they support the building while acting as a heat source in winter and a heat sink in summer. The piles alone will generate 79 tonnes per year in carbon savings.

WSP also supported Balfour Beatty Rail in its track re-modelling contract, which included 124 major track and signalling stages. We provided detailed design services for the electrical track equipment including 2.5km of new conductor rail, 750 metres of re-used conductor rail, 6.4km of new electrical cables and the equipment for eight new crossovers to facilitate the installation of the 3km of new track.

On the signalling side, we are excited to be involved in the world-first deployment of Automatic Train Operation (ATO) on an ETCS/ERTMS platform. Overlaying ATO onto ETCS Level 2 for cab signalling will enable the network to eventually achieve 24 trains an hour through the central core in each direction – a legacy of the late Paul Bates, who was instrumental in introducing elements of Network Rail’s Digital Railway initiative to the Thameslink programme.

Since construction began, WSP has remained involved in GRIP 5-8 (detailed design to project close-out) at the request of Network Rail. Working with Arcadis in a joint venture, we have provided design support services to Costain to help ensure that the strategic staging programme created for London Bridge station and Thameslink works is successfully delivered.

The programme organised the work into three 18-month slots, delivered in a tightly planned sequence of possessions and blockades. Any break in the sequence would have a severely disrupted the schedule. Using Virtual Design and Construction in early construction stages enabled us to integrate the station design with the development sequence and track construction to reduce costs and schedule duration. This was critical for the safe and timely reconfiguration and progressive release of the 15 platforms at London Bridge, along with the concurrent completion of new viaducts on the approach to the station and enabling works like Bermondsey Dive Under.

The early system design and construction phasing strategy may have held the whole Thameslink Programme together but, looking back on the project with more than a decade’s worth of hindsight, I can see that it ultimately comes down to people. From owners to operators, contractors, engineers, architects, SMEs and the cooperative commuting public, this collaborative team was the super glue that kept London Bridge station from falling down.

This article was written by David Carter, a project director at WSP and who is currently construction and logistics lead for WSP’s rail input into the hybrid bill development for HS2.

RailEngineerhttp://therailengineer.com
Rail Engineer is the leading independent quality monthly magazine for engineers, project managers, directors and leading rail executive decision makers. Head to www.railsubs.com to make a free subscription to RailEngineer magazine or one of its sister publications.
Previous articleCP6: A game of two halves
Next articleShedding light on Wigan Wallgate station 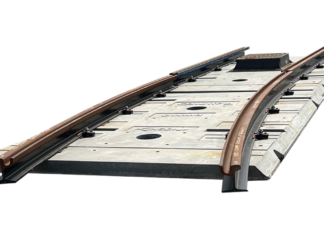 28th June 2022
Britain’s nine light rail systems compare with around 30 in France and 60 in Germany as, historically, Britain has failed to invest in its...