Rarely can the announcement of a £650 million rail investment package have been subject to as much criticism as July’s announcement by Scottish Transport Minister Keith Brown of the programme to transform Scotland’s flagship route between Edinburgh and Glasgow Queen Street High Level, the E&G.

In doing so, Brown announced: “The Edinburgh- Glasgow Improvement Programme (EGIP) will take train journeys on Scotland’s busiest commuter route into the next generation.”

Not everyone was impressed as this announcement cut the costs of the original EGIP plan by £300 million “to take advantage of new opportunities” and so abandoned much of the original plan, including the previously proposed increase to six trains per hour (tph). Are EGIP’s critics justified?

The Rail Engineer decided to find out…

In 2007, the Scottish Government announced its intention to electrify the E&G, its diversionary routes and lines to Dunblane and Alloa. The current E&G service of four tph was to be increased to six and journey time reduced by ten minutes to thirty eight. A new Edinburgh Gateway station would serve Edinburgh Airport (via tram) with a new Dalmeny chord enabling Edinburgh to Glasgow services to use this station and by-pass the flat junction at Newbridge. This curve, the provision of a grade- separated junction at Greenhill and a turnback at Croy were all essential requirements for the proposed increase in frequency.

In 2009, the Scottish Government published its Strategic Transport Programme Review (STPR). This included 16 road and rail infrastructure programmes including the six tph EGIP proposal from 2007 that was estimated to cost from £0.5 to £1 billion. Hence many thought this was a done deal, so the revised 2012 EGIP plan, which dropped the six tph proposal, came as a shock. However, closer reading of the STPR reveals the comment “In reality, the availability of funding over many years cannot often be predicted with accuracy and some degree of flexibility in the timing or prioritisation of projects will always be necessary”.

The 2012 EGIP plan also dropped electrification to Stirling and Alloa and of the E&G diversionary lines. However, with the Scottish Government committing itself to a rolling programme of electrification after EGIP’s completion, this is more of a postponement. Network Rail’s Strategic Business Plan includes post-EGIP electrification of around 100 single track kilometres per annum costing £171 million. The Edinburgh Gateway station remains but will not now be served by E&G trains.

With EGIP 2012 maintaining the current train frequency, the Dalmeny chord, the grade-separated junction at Greenhill and Croy turnback are not required. What is new, however, is an increase in train length from six to eight coaches to provide 32 coaches per hour, a 33% increase in current capacity. Although this is less than the 50% increase in the original EGIP proposal, since then the Scottish Government announced its plan for high speed rail link that would provide a significant increase in capacity between the two cities around 2025 (see The Rail Engineer issue 100 – February 2013).

Currently, Glasgow’s Queen Street High Level station can only accommodate a frequent six- coach train service as it is constrained between the Cowlairs tunnel portal and buildings at the end of the concourse. It is also very close to the Buchanan Galleries shopping centre whose planned redevelopment presents one of the “new opportunities” Keith Brown referred to in his EGIP announcement. This is the redevelopment of Queen Street Station for an eight-coach train service.

With EGIP’s recent change in scope and lack of a completion date, electrified E&G services might be thought to be some time away. However, with much already done, complete and committed work accounts for a third of the programme. The remaining contracts are to be let at the end of summer. It is only then that a firm completion date can be announced. Meanwhile, Network Rail’s Strategic Business Plan for Scotland gives an indicative completion date of end 2017.

Work off the main line

One of the first items of work is, perhaps surprisingly, on the West Coast main line (WCML), five miles from Glasgow Central. This is the Newton junction capacity improvement works, a £10 million contract awarded to Carillion which provides an additional connecting line between Kirkhill and the WCML. It requires four new S&C units being i

nstalled in weekend possessions in January, May and October with additional earthworks using a Tensar TriAx Geogrid. Work started last November and, when complete in December, will enable extra services between Edinburgh and Glasgow Central.

Also off the main E&G route is Carillion’s £40 million contract for the Springburn to Cumbernauld electrification for which the design was done by Atkins as described elsewhere in this magazine. Electrifying the Cumbernauld line enables the service to be operated from Queen Street Low Level station, removing two departures per hour from the High Level station. It also partly electrifies a future diversionary route.

This project includes electrification of 44 single track kilometres, bridge clearance works, installation of additional S&C at Springburn
to improve operating flexibility and extending the Cumbernauld platforms by 27 metres for six-coach EMU operation. Immunisation of signalling and telecoms equipment is also part of this work, although the screening requirement is reduced with the installation of fibre optic cables on the route. The programme is for the new layout at Springburn to be completed in December and the line energised in January 2014.

The work at Haymarket Station, Scotland’s fourth busiest, is clearly apparent to the four million passengers who use it each year. In December 2011, Morgan Sindall were awarded a £25 million contract for the refurbishment of the existing station buildings, renewal of station canopies, constructing a new modern concourse with a new access bridge having DDA compliant lifts and escalators to all platforms. The new concourse opens in December and will provide an integrated train, tram, bus and taxi transport hub.

December 2011 also saw the announcement that BAM Nuttall had been awarded a £27 million contract for electrification clearance bridgeworks. For many of these bridges, Macrete Ireland Ltd provided its system of match-cast beams consisting of con arch units and associated pre-cast concrete elements. This work is also very apparent to local residents with work now complete or in progress at 44 sites.

As this contract was awarded before the 2012 EGIP announcement, it includes bridges on lines no longer to be electrified as part of EGIP. This includes the £2.3 million reconstruction of Carseview Bridge near Stirling. This was done in partnership with Stirling Council which contributed £300,000 for road safety improvements. Bridge replacement work at Hope Street, Falkirk, also not part of EGIP electrification, will see the road closed for eight months.

Future electrification clearance challenges include Carmuirs and Winchburgh tunnels. Carmuirs tunnels are 40 metre long single-bore structures at a low point in the line underneath the Forth and Clyde canal. Unlike double-track tunnels, there is not the generous clearance in the centre of the tunnel for overhead line supports. Electrification solutions are still being evaluated. These include track lowering of 150 to 200 mm or replacing the tunnels with a canal aqueduct.

Winchburgh tunnel poses the greatest clearance difficulty. It has a very narrow six foot (1571mm) and so requires a high fixity solution for which a Rheda 2000 in-situ trackslab with VIPA baseplates and a Furrer+Frey conductor beam have been chosen. A constructability review is being undertaken to minimise the time taken to install this track slab, but it is clear this will be a matter of weeks.

Closing a line carrying twenty thousand passengers a day for this time is a serious business. The strategy is likely to involve additional Edinburgh to Glasgow trains on other routes, for which the Newton capacity improvements will be put to good use. There will be a reduced service of trains on the main line using the diversionary route via Dalmeny that requires a reverse.

A pre-requisite for this diversion is the planned Haymarket to Inverkeithing headway improvements which, despite being on the
Fife lines, are also part of EGIP. These involve four-aspect signalling between Haymarket and Dalmeny with additional signal sections on the Forth Bridge and will give a 30 to 42 second headway improvement.

Glasgow Queen St High Level station handles nineteen million passengers a year and is one of the busiest in Scotland. It has seven platforms, of which only one can currently accommodate a train of eight 23 metre long coaches as shown in the table. In a report for Transport Scotland, Jacobs offered a proof of concept showing a remodelled station could accommodate an eight-coach service.

Key to this was Network Rail’s 2011 announcement of plans to transform the station as part of the expansion of the adjacent Buchanan Galleries shopping centre. The station work includes a new car park, new mezzanine level, link into the shopping centre and replacement of the 1960s front entrance with a modern glass frontage. It is this new frontage, with its associated removal of the Millennium Hotel extension, that creates the space to extend platforms 2, 3, 4 and 5 to accommodate eight-coach trains.

Accommodating eight-car trains requires platform extensions of between 35 and 60 metres at the intermediate stations of Croy, Falkirk High, Polmont and Linlithgow. This will be done as the line is electrified. Selective door opening has been ruled out, partly because it would incur delays at these busy stations. Of the twelve Edinburgh Waverley platforms currently used for Glasgow Queen Street services, eight can accommodate eight-coach trains.

When the E&G route is ready for its new fleet of electric multiple units (EMUs) passengers will experience an immediate transformation. A modern EMU, such as the class 380, accelerates from 0 to 60 mph in 50 seconds. Whilst this is unlikely to impress Jeremy Clarkson, it compares with one minute 50 seconds for the current class 170 DMU. This illustrates how EMUs can give the required 10 minute journey reduction on the E&G route with typically four intermediate stops and a 1 in 41 gradient up Cowlairs tunnel.

Transport Scotland’s strategy is that the new EMUs required will be procured by the next ScotRail franchise due to start in 2014. They will be maintained at a new EMU depot to be built at Millerhill. As this is also the start of the new Borders railway, the design and operation of the depot needs to take account of the headway constraint of the single line at Millerhill and its potential impact on Borders line services.

With around seven million passengers a year, the E&G is by far Britain’s busiest rail route between city pairs. It is a worthy candidate for the electrification and capacity improvements provided by the multi-faceted EGIP programme. Other central Scottish routes, including secondary routes between Edinburgh and Glasgow, are also set to benefit from EGIP and the post-EGIP rolling electrification programme.

The resultant increase in capacity cannot be regarded as a cut-back. Moreover, it is fair to say that faster, longer trains from a modern, spacious Queen Street station will transform the passengers’ experience and will do so in a way that offers the taxpayer best value. This transformation is also an example of the law of unintended consequences with longer trains being the result of a shopping centre extension. If Scotland can pull off its high speed rail plans, the transformation will be complete. 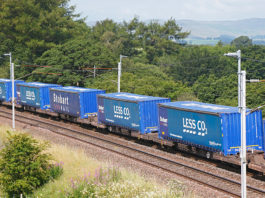 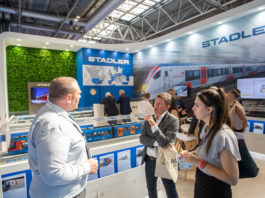 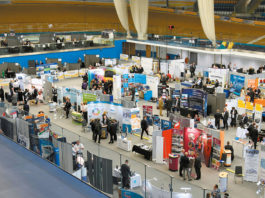