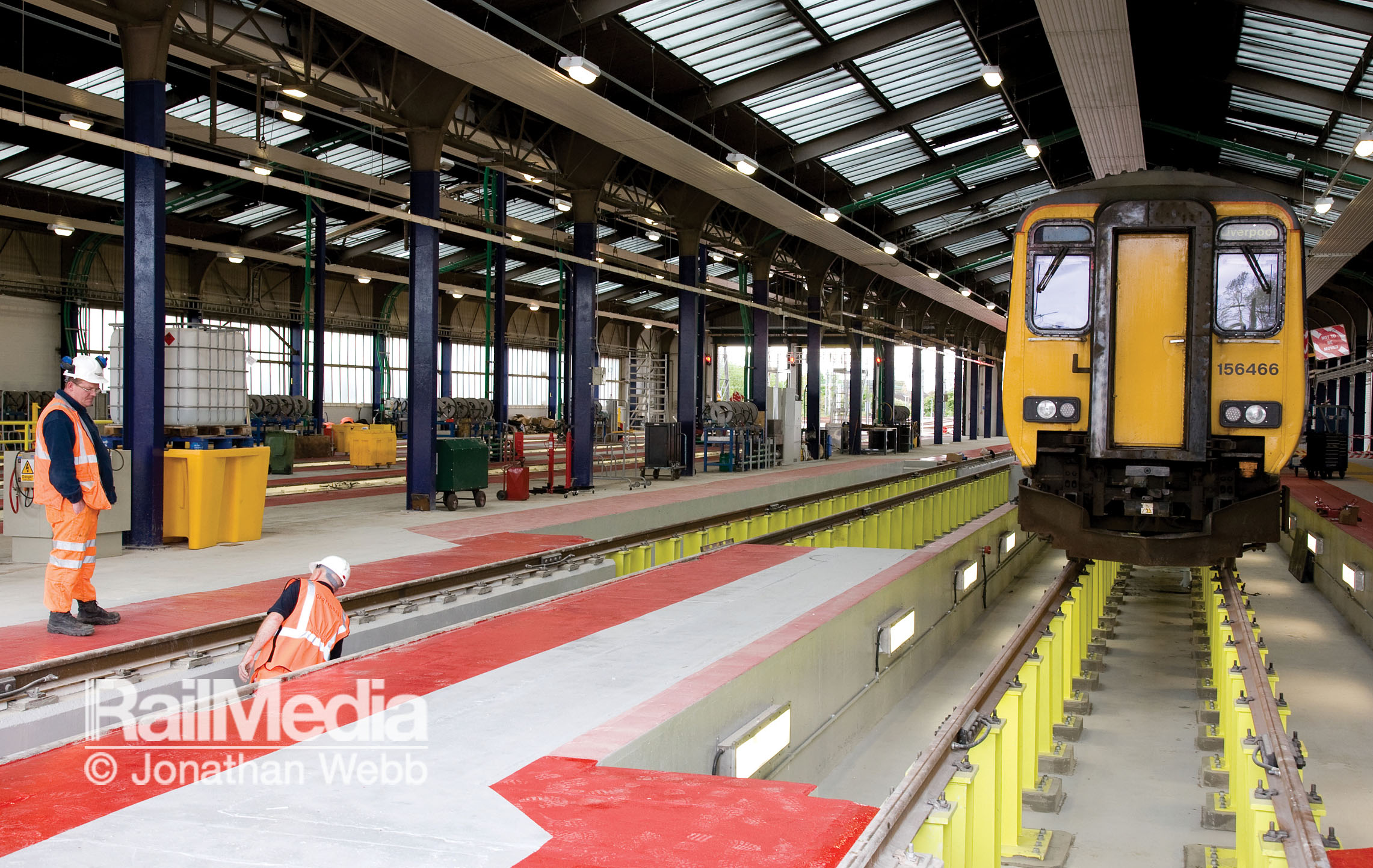 The original depot had been closed early in 2008, when train company and freight operator EWS lost the contract to service the Voyager fleet for Virgin Trains. However, following a £13.4m investment from the Department for Transport, the derelict depot has now been transformed into a modern rolling stock train maintenance facility.

Early in 2011, the Northern Rail rolling stock strategy was agreed with the DfT identifying the (then) closed Allerton Depot as a requirement to service Northern Rail’s fleet of Class 156 diesel multiple units (DMU), along with some Class 150s and Class 142s.

Initially, Network Rail’s CP4 delivery plan commitment to the DfT identified that the stabling project could only be completed in December 2013 and it became clear that another solution was needed, as the depot had to be operational for the December 2011 timetable change, just nine months away. The usual delivery route via external contractors would not reduce the delivery timescale sufficiently for Northern Rail. Network Rail looked at how the programme could possibly be met by alternative delivery routes and a decision was made to use the Network Rail Maintenance team who committed to the timescales and successfully completed the work to a high standard.

Northern Rail recruited local staff to operate the depot once the construction was completed.

Outside the depot, in the yard and sidings, 4.7 miles of track were renewed and 27 sets of hand points installed. The former oil interceptor plant, fuel delivery tanks and pumps, as well as four other buildings, were demolished and seven under-track crossings installed. 25kV overhead wires are installed within the yard but, for the moment, not within the train shed.

A new carriage washing plant was delivered by Garrandale and installed. As the toilets on Northern Rail’s vehicles discharge under the train, an automated under frame cleaner was also needed, using a hot water jet wash to clean the trains before maintenance.

Unsurprisingly, the drains needed a complete rework. To comply with current environmental legislation, all waste and foul drains had to be connected to the local sewerage system. This meant rerouting the foul drains from the Cheshire Lines, and the carriage wash effluent pumps, into the new Northern Rail system. All foul sewers had to be connected to a new United Utilities connection as the previous one was allowed to drain into a Victorian culvert, which fed into the Mersey! A new 12 metre foul sewer chamber with pumped evacuation was installed, along with a Klargester foul drain from the signal box and wheel lathe.

For security, a cabin with an automatic access gate was fitted and the site totally fenced in. Over a kilometre of drivers walking routes were laid out, with low energy LED lighting and a new level crossing in front of the depot. There are also new aprons across the tracks to the front and back of the depot.

Network Rail completely refurbished the wheel lathe building and Northern Rail staff are recommissioning the Hegenscheidt wheel lathe and installing a new swarf conveyor system. Once this wheel lathe is fully operational, the facility at Longsight depot in Manchester will be taken out of service for refurbishment.

When the depot building was unlocked the boiler room was found to be under three feet of water. This room housed four heating boilers, two for the accommodation block and two for the train shed, so its refurbishment became a priority. Boiler circulation pumps and motors, and boiler shunt pumps and motors, were renewed in the process.

The heating system itself was redesigned, with 600 metres of Sabiana radiant heating panels in the train shed and eight Sabiana fan coil units in the stores and workshop. Most of the pipework was renewed after removal of the old roof vent stacks.

All services were rewired, as were the wheel lathe and the new carriage washing plant. The fuel delivery system was refurbished, and a network of pipes installed to deliver lubricating oil, hydrostatic oil and glycol, from a central tank store, to ten multi-service points around the depot which also incorporated a waste oil vacuum recovery system.Similarly, a new compressed air distribution system was fitted, along with a new compressor.

On the floor of the depot, lowered pits on road number five were provided with a Mechan engine removal and replacement system utilising a hydraulic lift table with mechanically interlocked removable rail sections and a 2-tonne capacity jib crane, to facilitate the removal and replacement of complete engines. The floors themselves were painted with anti-slip Pumatect Resin, a solvent free, high build, heavy duty, epoxy floor coating, and the roller shutter doors were refurbished.

The office block houses the engineering depot supervisor’s office and shift production manager’s office. There is CCTV coverage of the site and a building management system which monitors energy consumption, the depot protection system, all lighting both internal and external, heating and ventilation, the fire alarm system which also activates fire shutters between the train shed and the accommodation block, and all fluid levels in the tanks and bunkers.

A separate stores building is worth of note. The stores facility is completely managed by Unipart Rail which has designed and implemented procedures for supplying parts in a timely fashion directly to the maintenance teams, facilitating quick turn-round time for the units.

The transformation from a derelict shed and yard to a modern, fully functioning train maintenance depot in just six months is an achievement of which Network Rail and Northern Rail can justifiably be proud. Forty six new jobs have been created, and twelve class 156 DMUs are serviced every night from the allocated fleet of 28.

Allerton is also planned to be the home for the cascaded class 319 EMU fleet, when Network Rail’s North West Electrification programme is complete, so there is a firm future ahead for this once-neglected facility.

A fresh approach to depot safety