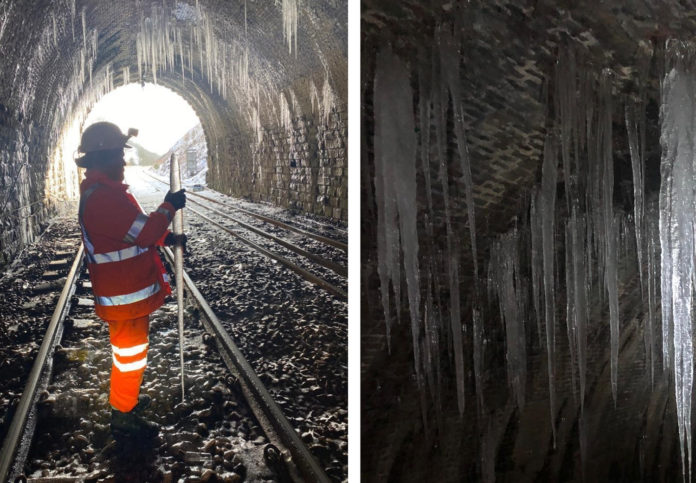 Game of Thrones may have coined the phrase ‘winter is coming’, but winter is staying in the North West as railway workers battle to keep passengers and freight moving in the freezing weather.

Several days of sub-zero temperatures have caused icicles up to 1.5m long to form in tunnels in Greater Manchester, Lancashire and Cumbria – after weather which wouldn’t be out of place north of ‘the wall’ in the hit HBO series.

Some of the massive icicles around the region – which Game of Thrones villain the Night King would be proud of – have also been removed by hand by Network Rail staff.

Although they look spectacular, the hanging ice can fall and damage passing trains causing delays to passengers and goods.

Icicles on bridges and other structures can also damage the overhead power lines.

Chris Pye, infrastructure director for the North West, said: “The saying ‘Winter is Coming’ may be best associated with Game of Thrones, but it’s one which prays on my mind too when the mercury plummets like it has.

“Our extreme weather action teams prepare for when winter bites so we’re ready to keep the railway running safely and smoothly for passengers and freight. But while our staff are currently in their own battle – fortunately not with the Night King but against the elements – I’d urge anyone making essential journeys to check National Rail Enquiries before setting off during the freezing weather.”

And some moving railway equipment, like points which allow trains to switch between tracks, are heated so they don’t seize in the freeze.

While the very cold weather continues, passengers making essential journeys in this period of national lockdown are being advised to check www.nationalrail.co.uk for the latest travel information.