Widely regarded as one of the best of the London termini for passenger circulation and amenities, perhaps up until the reconstruction of Euston, Waterloo station now finds itself undergoing a major transformation. Once again, as it has done several times before, the station must keep ahead of capacity demands, both those pressing now and future forecasts.

Looking back over time, it is possible to see how these present needs are only a continuation of an inevitable ongoing evolutionary process.

Prior to the present station, there existed a complex and confused arrangement of platforms, buildings, track layouts and passenger areas. These had evolved piecemeal, over many years, as the commuter belt expanded and the London & South Western Railway developed its services during the nineteenth century.

Towards the end of that century, the railway company found that, eventually, it had to take radical measures to cope with the increasing passenger numbers and the unsatisfactory operational aspects of the station. For example, fifteen of the platforms had to share numbers 2 to 10. There would be trains on either side of a platform, but the unknowing passenger would find it difficult to be sure on which face was his train!

Waterloo was well known for the difficulties in getting information about departures. In Jerome K. Jerome’s famous and amusing book Three Men in a Boat (1889), the station was satirised as the protagonists, frustrated in their inability to find their train to Kingston, had to bribe an engine driver to take them there. The train that they had illicitly acquired was actually the Exeter mail.

It is in part thanks to the ramshackle nature of the previous station that the L&SWR directors were incentivised to make a fresh start on the site. In 1901, chief engineer JW Jacoub-Hood was sent to the USA to study the design of terminal stations. The new Waterloo, which was constructed between then and its grand opening by Queen Mary in 1922, largely followed his plans, which provided a straightforward and spacious station on a difficult site.

The new design featured a broad passenger concourse running across the ends of all twenty-one platforms, along with a new roof, passenger amenities and railway offices in a long frontage block across the whole area available for station redevelopment.

Throughout the twentieth century, Waterloo station was a common sight in feature films and also in newsreels during both World Wars, with servicemen and those greeting or waving them off thronging the familiar concourse. The magnificent clock, which still hangs centrally over the concourse, is often in evidence.

On the theme of armed conflict, the Victory Arch, which is a notable architectural feature at the west end of the concourse, opposite to Platforms 19 and 20, is, because of its position, sadly unnoticed by the majority of passengers hurrying through it to gain access to or from the station. The architectural context of this will become clearer later in this article.

The station went through periods of further development in the 1920s and 1930s with the electrification schemes, but remained largely unchanged until the construction of the International terminal which opened in November 1994, reducing the number of platforms available for ‘domestic’ use back to nineteen.

The incentive for the present upgrading is the need, once more, to provide significant extra capacity at the station and throughout the Wessex Route. The opportunity is provided primarily by the five redundant former International platforms, which are now being pressed into use for domestic services.

Since the relocation of Eurostar services from Waterloo to St. Pancras International in November 2007, platforms 21 to 24 have lain dormant awaiting a new purpose (Platform 20 was put back into use for domestic services in 2014). The former International terminal ticketing, checking-in and security facilities have become an empty space, isolated from the rest of the station.

A most imaginative project to revitalise this part of the station, and also to provide the key to capacity enhancement for the whole route, is now rapidly approaching completion.

Following similar thinking to that which created the fit-for-purpose rebuilt Waterloo in 1922, the International platforms are being shortened at their buffer-stop ends so that there is space for a broad and adequate passenger concourse in front of a new gate line with departure board displays above.

During the period in which these platforms were in operational use for Eurostar services, the passenger checking-in area was below the level of the platforms themselves. The radically refurbished area now includes a new concourse bridge, which connects the original platform concourse to the new one for Platforms 20 to 24, at a stroke unifying the new “Domestic” platforms with the original nineteen and greatly facilitating passenger circulation. The lower level, below this new bridge, will become part of a retail area to be developed. There is an aspiration for it to rival the similar developments at London St. Pancras International and Birmingham New Street.

The five new platforms will open for temporary operational use between 5 and 28 August whilst there is a closure of Platforms 1-10. After that, Platforms 21-24 will remain closed until December 2018. Platform 20 will remain open permanently.

Virtual reality imaging and artists’ impressions of the redeveloped area at two levels around the new concourse bridge show an enhanced passenger circulation and retail environment, with new architectural features which will show off the 1990s International roof structure to great effect. It can also be seen from the imaging that the Victory Arch will be displayed far more effectively as part of the overall ambience than it ever has been previously.

Another major structure to be incorporated into the redeveloped area of Platforms 20 to 24 is a new link roof, which will form continuous cover between the iconic International roof and the original station roof trusses. The structural glass wall, which previously separated the International from the domestic stations, was taken down as part of the modifications for the new concourse.

Network Rail’s Wessex Route is one of the busiest and most congested parts of the railway network. In 1997, soon after privatisation, there were 108 million passenger journeys annually on the whole South West (Wessex) Route. Currently, that figure has more than doubled to 234 million per year. Furthermore, a baseline passenger survey study made in 2013 forecast that between that date and 2043 there would be an increase of 40 per cent.

Those statistics refer to the whole SW (Wessex) Route. For Waterloo station alone, the statistics are perhaps even more significant. Here there are more than 99 million passenger journeys per year, up from 58 million in 1998. More people use Waterloo station than Heathrow airport.

To respond to these pressing demands for increased capacity, Network Rail and South West Trains, in partnership with the Department for Transport, have developed a strategy known as the Waterloo and South West Upgrade. The primary key components of this upgrade are:

The upgrade represents an £800 million investment, approximately half of which is accounted for by the conversion of the International platforms and terminal into their new use. Also included in this overall budget, apart from the other platform extensions and associated track and signalling alterations, is the provision of thirty new five-car trains.

The infrastructure alterations and new build are being carried out by the Western Capacity Alliance, which is a consortium of Network Rail, Aecom, Colas Rail, Mott MacDonald and Skanska.

The overall programme commenced in 2016 with the initial redevelopment stages of the International platforms. They have been shortened at their far ends to take 12-car trains rather than the much longer Eurostar trains for which they originally catered.

When these platforms are ready for use by Windsor line services on 5 August this year, Platforms 1 to 10 will be closed between then and 28 August. This closure will allow Platforms 1 to 4 to be extended to accommodate 10-car trains and Platforms 5 to 8 will be modified. The proximity of switch and crossing configurations outside the station means that the extension of the platforms cannot be achieved without significant modification of the track layouts approaching these platforms and their associated signalling.

Much of this alteration to the approach infrastructure was accomplished over the 2017 Easter weekend. Arup has designed an innovative track layout, including tandem switches on concrete bearers, to achieve compactness in the limited area available for reconfiguration.

An even more severe closure, of Platforms 1-14, between 25 and 28 August, over the Bank Holiday weekend, is needed in order to complete the track and signalling alterations necessitated by the platform extensions.

Extension of the platforms at the outlying stations is now complete apart from the work at Feltham, which is complicated by the proximity of a level crossing.

The end result of this, the largest investment for decades, will be an increase in peak time capacity into Waterloo of 30 per cent. That’s room for an extra 45,000 people each morning and afternoon.

Working with the travelling public

The need for these major closures and the effects of them on the train services has been well publicised to customers throughout the South West area through a comprehensive leafleting campaign and the provision of other local information such as station posters, commercial adverts and media announcements. Passengers have been given very detailed advice about how to modify their travel plans economically and to avoid frustration whilst, at the same time, being told of the long-term benefits of the capacity upgrade. The publicity campaign also aims to reduce the demand for travel during the closure periods in order to further minimise the potential for overcrowded services.

Using the results of surveys carried out by Transport Focus, Network Rail has been able to confirm that 84 per cent of customers polled were fully aware of the work to be carried out in August, which is the most disruptive period in the whole programme, and 62 per cent are supportive of the need for the work. Also, encouragingly, there has been a good response to the exhortations to minimise travel. During this period 34 per cent of respondents will work from home or a new location, 24 per cent will take annual leave and only 50 per cent “will continue to use the train”.

Plans announced for work on Transpennine Route Upgrade this summer

The West Yorkshire Combined Authority has announced ambitious plans for a clean and connected transport system that will connect all West Yorkshire’s communities to...
Read more
General Interest

The railway lines north of Radyr in Wales have reopened after a successful three-week blockade to push forward with building the South Wales Metro. With...
Read more 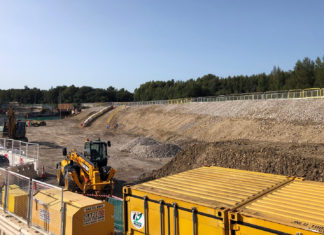 Plans announced for work on Transpennine Route Upgrade this summer