In much the same way that Network Rail has a dedicated train for inspecting the railway, the HST-based New Measurement Train, German state railway Deutsche Bahn has the ICE-S for the same purpose. The ICE-S usually consists of two power cars and two trailer cars, although it has been seen with any number between one and three intermediate laboratory cars. It is based on an ICE 2 unit but with a power car at each end, unlike the normal ICE 2 which only has one power car and one cab car, and runs on an overhead 15kV 16.7Hz AC supply. Operated by the technical arm of Deutsche Bahn, DB Systemtechnik, the train runs over every German high-speed line at least twice a year, checking clearances, overhead lines and track geometry. The equipment used for these tests is housed in the intermediate carriages.

However, since April, a new trailer car has been seen in the consist. Painted blue, it is quite different from the ICE 2-based carriages of the rest of the unit. For a start, it is slightly longer at 28.75 metres as opposed to the standard train’s 26.40 metres. To maintain gauge, the new coach is also slightly narrower, and it has shrouded bogies.

The new car is not a development in DB’s testing regime, rather it is the first experimental carriage for Siemens’ new high-speed train, the Velaro Novo.

The Velaro family of high-speed trains has been remarkably successful. The first model – Velaro E – was delivered to Spain, commencing in 2005. RENFE has 26 eight-car sets which operate the Madrid to Barcelona high-speed service.

60 eight-car trains for China followed, with bodies that were 300mm wider to allow for 3+2 seating. More, wider trains followed for Russia. Eight 10-car sets, running on 1,520mm gauge bogies, were ordered in 2006 for the Moscow to Saint Petersburg line. A further 20 sets were ordered in 2011.

Building on this success, Siemens started, in 2013, to develop the next generation – Velaro Novo. Intended to be lighter and more efficient than its predecessors, the longer cars will, as standard, be coupled into seven-car formations, eliminating both the weight and maintenance requirements of a pair of bogies.

The bogies themselves are an inside-frame design. Siemens developed inside-frame bogies for the Desiro City design that is now the Class 700 trains used on Thameslink. On that train, the inside-frame saved one tonne of weight per bogie. Much work was needed to develop the design for high-speed use, but similar weight savings are anticipated. The lower unsprung mass also ensures smoother operation and reduced wear.

In addition to the lighter bogies, new profile and welding technologies for the body shells, including the use of friction stir welding, new on-board converters and the use of innovative materials and construction solutions have reduced the train’s weight by over 70 tons, or around 15 per cent.

The use of permanent-magnet motors further reduces weight, as the heavy cooling systems needed for normal asynchronous motors is no longer needed.

But weight saving is only part of the equation. Improved aerodynamics also play their part in achieving higher energy efficiency and thus substantially reduced lifecycle costs.

The completely covered and streamlined bogies (see above) cut energy consumption by roughly 15 percent and reduce noise emissions. This shielding is not restricted to the outside of the car, but the underside of the bogie is also covered, giving the whole train a smooth underbody and helping to control airflow under the train.

The aerodynamics of the end cars is further improved by a more streamlined design, and gangway connections that are flush with the train’s body shell substantially reduce aerodynamic drag and cut energy consumption by around ten percent. In addition, the high-voltage equipment on the car roof is also completely covered, further improving the aerodynamics.

These improvements to weight and aerodynamics result in a train which, running at 300km/h, for example, will use 30 per cent less energy than previous Velaro models, translating to savings of 1,375 tons of CO2 emissions a year.

The Velaro Novo’s lightweight body shell is based on the empty tube concept, meaning that there are no permanent installations inside the car and the interior can be laid out however the operator wishes and altered whenever requirements change. The cars have no underseat fittings or electrical cabinets in their interior. Technical installations are reduced to a minimum and are functionally organised to optimise cable routes and weight savings. Overall, the interiors are some 10 per cent roomier than previous models.

Combined with the new wider connections between cars, already mentioned due to their improved aerodynamic performance, the interior of the train will have a more spacious feel than earlier high-speed trains. Internet service, passenger information systems, on-board entertainment and CCTV security surveillance systems can be integrated to meet customer needs.

Despite the longer car length, and slightly narrower bodyshell that necessitates, the new cars have an aisle width of 535mm, 11mm wider than the previous Velaro, while offering the same seating comfort. For operations on rail routes with larger structure gauges, such as in Sweden, Russia and China, a variant is available with a wider body shell, making possible a 2+3 seating configuration.

The future is here

As has been mentioned, Siemens is already testing these new innovations. A test car, integrated into the ICE-S operated by DB Systemtechnik, is currently undergoing test runs throughout Germany. The tests are being conducted under various operating conditions to monitor and analyse the performance of the car body and bogies, among other things.

The ICE-S test train has a maximum operating speed of 280km/h, although it can run at up to 330km/h. Velaro Novo is intended to operate on high-speed railways at between 250 and 360km/h.

Programme director Michael Kopp explained that the test car was actually almost a production vehicle. “Actually this car already has a series-production status,” he explained. “Essential components of this car have been manufactured as standard products. Bogies, car body, windows, doors and many more.

“The crucial point is finding a solution, and what we did differently this time with Velaro Novo, was to tell colleagues involved to step forward with ideas, to question everything we have known up to now, to think “out of the box”, to think in new ways – we are not going to brush anything aside for now.”

That approach has borne fruit, and the test/development car, christened “#seeitnovo”, is the tangible result.

“The Velaro Novo is our answer to global demands in high-speed transport,” Sabrina Soussan, CEO of Siemens’ Mobility Division, commented before the train was shown off for the first time at InnoTrans 2018.

“The new train writes a new chapter in the Velaro’s success story and enables operators to offer improved passenger comfort and economy over the train’s entire lifecycle. What we are presenting today is the result of five years of development: a platform offering uniquely optimised energy consumption and maintenance costs, as well as maximum flexibility and reliability.”

Nigel Wordsworth BSc(Hons) MCIJhttp://therailengineer.com
SPECIALIST AREAS Rolling stock, mechanical equipment, project reports, executive interviews Nigel Wordsworth graduated with an honours degree in Mechanical Engineering from Nottingham University, after which he joined the American aerospace and industrial fastener group SPS Technologies. After a short time at the research laboratories in Pennsylvania, USA, Nigel became responsible for applications engineering to industry in the UK and Western Europe. At this time he advised on various engineering projects, from Formula 1 to machine tools, including a particularly problematic area of bogie design for the HST. A move to the power generation and offshore oil supply sector followed as Nigel became director of Entwistle-Sandiacre, a subsidiary of the Australian-owned group Aurora plc. At the same time, Nigel spent ten years as a Technical Commissioner with the RAC Motor Sports Association, responsible for drafting and enforcing technical regulations for national and international motor racing series. Joining Rail Engineer in 2008, Nigel’s first assignment was a report on new three-dimensional mobile mapping and surveying equipment, swiftly followed by a look at vegetation control machinery. He continues to write on a variety of topics for most issues.
Previous articleIssue 168 – Affordable trains, expensive infrastructure
Next articleMark Carne looks back on his time at Network Rail

The ongoing £1.2 billion East Coast Main Line (ECML) upgrade is made up of four major projects: the remodelling of the track and supporting...
Read more
Featured

“There can be no place, I believe, for deniers who are unable to acknowledge that the industry’s reputation, built over many years, was of...
Read more
Infrastructure

Systems thinking: why applying it from the start can transform your project

Major projects are inevitably very complex. Yet too often, we fail to fully comprehend and grapple with this complexity, and as a result create...
Read more 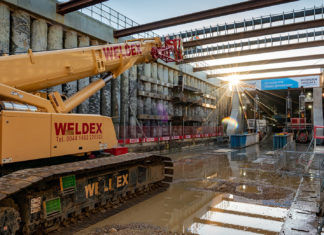 19th April 2021
The ongoing £1.2 billion East Coast Main Line (ECML) upgrade is made up of four major projects: the remodelling of the track and supporting...

From cyber secure to cyber smart: why a broader understanding of...