When the rail engineer last reported on the Welsh Highland Railway in August 2008, the line was still in the final stages of construction and civil engineering challenges were dominating the work. The railway had opened from Caernarfon to Rhyd Ddu and was beginning to carry useful passenger loadings, establishing itself in the Welsh tourist industry. A recent IRSE technical visit enabled the story to be brought up to date but a brief recap as to what has been involved might be useful.

The line has been built in four stages –

• Stage 1 from Caernarfon to Dinas in 1997 using the trackbed of the old standard gauge line to Afon Wen. As such, clearances were not a problem but the processes needed to rebuild the railway were learned.

• Stage 2 from Dinas to Waunfawr in 1999 on the old WHR route showed that the structure gauge had to be enlarged to accommodate the new locomotives and rolling stock being provided. This meant lowering the invert of existing underbridges or the provision of new ones as well as rectifying a major landslip.

• Stage 3 from Waunfawr to Rhyd Ddu in 2003 saw the railway begin the climb to its summit, encountering a number of bowstring bridges along the way. Some of these could be fettled back into shape but one was replaced by using a redundant standard gauge bridge from the Sheffield area. At Rhyd Ddu, two water towers have been provided at both ends of the station – a reminder that water replenishment is a vital constituent when operating steam locos.

• Stage 4 from Rhyd Ddu to Porthmadog has been by far the biggest challenge, caused in part by the locals at Beddgelert not wanting an intermediary terminus because of expected road traffic problems. This section includes four tunnels through the spectacular Aberglaslyn Pass as well as raised retaining walls to protect against damage by rock fall, an eight-span viaduct at Pont Croesor, a widened embankment at Nantmor using reinforced earth (rare in the UK) and the construction of farm accommodation bridges near Porthmadog. Three new steel truss bridges have been required for the various river crossings, made and assembled by the Brunswick Iron Works in Caernarfon. The track laying process was by now down to a fine art and a record 360 metres of track was laid in one day. Footpaths had been created on sections of the trackbed and these had to be replicated close to the line, all part of getting the local community on side. At the Porthmadog end, there was the triple challenge of crossing both Network Rail’s Cambrian line and the Britannia Bridge, as well as accommodating trains in the Ffestiniog Railway’s station.

The line has a stiff gradient, with short stretches involving climbs of 1:36. To operate long trains, powerful locomotives are required and the line has four Garratt engines acquired from South Africa, three 2-8-2 tender engines from the same source but not yet operational, the original Garratt locomotive K1 brought back from Tasmania by the Ffestiniog many years ago and two diesels for use on works trains, one of which can act as a standby when steam is unavailable. There is also a converted 1m-gauge tamper as well as other track maintenance plant. The main coaching stock is new and slightly bigger than the Ffestiniog coaches, thus offering more height and seat width.

The signalling on the Welsh Highland is delightfully simple – there is none. Train movements are controlled by staff and ticket. An engraved staff for every single line section is kept in a locked cabinet at all the passing loops. The train has to have this staff in order to proceed into the next section. Normally trains in different directions pass at these places so it is merely a matter of exchanging staffs between trains.

Occasionally, when specials are being operated, two trains can follow each other in the same direction and this leads to ticket working whereby the first train, having seen the staff, is issued with a written ticket for the section and is allowed to proceed. The following train proceeds with the staff once confirmation is received that the first train is clear of the next loop. All of this can get complicated and situations do arise where the staff is at the wrong end of the section to be entered. In such circumstances, there is no alternative but for someone to drive by road to the next station, collect the staff and return.

The WHR operators would like something more flexible and a number of single line token instruments have been acquired from Irish Rail. The plan is to commission these at each loop but linked via a broadband internet connection, there being no cabling along the railway. The means of achieving this connection are being thought up at the present time using the experience of other railways where similar things have been done.

There are signals at every loop but only to indicate that the loop can be entered. These are modelled on the original Ffestiniog design, being a circular banner painted red with lights around the circumference. Known as ‘ladybirds’, only the top and bottom holes are equipped with yellow LED lights. When the lights are lit, the loop is clear to enter. However some loops have sidings and, to enter these, a shunt token is required, the issuing of which is arranged through the control at Porthmadog. The ladybird signal is unlit if a shunt token is in use. Loop operation is further safeguarded by white point lights. When lit, these indicate the point is set for the loop to be entered. Trains leaving a loop run through the points wrong road, whence the light goes out.

A number of level crossings exist on the line. Private access roads have unprotected open crossings with the usual cautionary notices. At public roads, the standard UK AOCL (Automatic Open Crossing Locally monitored) is used with wig-wag red lights plus strident sounders for road users and a white light for train drivers showing that the crossing has been activated.

The diamond crossing at Cae Pawb had been laid when the line was visited in 2008 but the means of safely controlling movements were still being devised. The situation was made more complicated by Network Rail being about to change the line from RETB operation to ERTMS (see issues 74 (December 2010) and 79 (May 2011) of the rail engineer). Once the method of providing a release from the Machynlleth control centre had been agreed – this by limiting the issue of movement authorities – a method of safely preventing WHR trains from inadvertently entering the crossing had to be devised. This has four constituent parts –

• A local control panel and relay-based interlocking set in two adjacent lineside cases and a ‘sentry box’ for the crossing controller. The panel shows the release status from Network Rail which, if free, allows the clearance procedure to begin. Relays were chosen on grounds of cost and the interlocking was designed by the WHR signal engineer, constructed by MGB Signalling and independently tested by Sitec.

• Two track circuits on either side of the crossing of which all four have to be operated in sequence for the procedure to be completed and the crossing clearance given back to Network Rail. Should the sequence not complete – if for instance a loco has to rescue a failed train – then an emergency release can be given by the crossing operator. Since the WHR power supply is domestic mains with no back-up, the track circuits nearest the crossing are powered from Network Rail’s safeguarded supply. The track circuits are the 70V impulse type, these being more suitable for breaking down any surface rust that might build up with the relatively infrequent train service. The 70V supply is derived locally and suitably protected against lightning interference.

• A wide-to-gauge trap point on both sides of the crossing with a point lock for both the closed and open positions. This type of trap was chosen rather than the more usual single rail design as it will cause an errant locomotive to derail in a vertical position, it not being desirable to turn the train onto its side.

• A home and distant signal either side of the crossing, both of the ladybird type, which can only be cleared when the interlocking has proved all the other circuits are correct.

The usual safety certification has been necessary, made more complex by having to first prove a process for the original RETB signalling on the Cambrian. However, with ERTMS commissioned on this section back in October 2010 and WHR not regularly running to Porthmadog until 2011, both parties are gaining confidence with the new operating procedures.

To enter the Ffestiniog Railway’s station, the Welsh Highland has to cross the Britannia road bridge. This involves a short section of street running. The rules for this were a test for all the authorities. Having firstly tried to use railway rules, then tramway and then by inventing revised railway rules, the final solution has been to treat this as an elongated AOCL. The strike-in activation when arriving at Porthmadog is by manually operating a plunger on the approach but this means stopping the train; not ideal with a steam engine and a heavy load. Plans to operate automatically are being worked out to allow a 5mph approach and have already been tested in the reverse direction when leaving Porthmadog to go north.

The station layout is less than ideal for the WHR. Trains have to go past the station and reverse in – akin to Dorchester South before it was modernised as older readers will remember. Propelling a long train around the station curve was not thought to be a good idea so a Ffestiniog pilot locomotive (usually a diesel) has to be on hand to attach to the train’s rear before reversing. All this is a bit complicated so one can expect to see a more convenient arrangement being designed in the years to come.

This amazing line is now in full operation and already establishing itself as a major tourist attraction. The cost of rebuilding has been £23.8 million, of which Stage 4 was £20 million. This might be considered a lot of money but, in terms of what has been achieved, is comparatively cheap. Funding has come from the Millennium Commission, the Welsh Assembly and the EU development fund, plus a host of smaller contributors. Many local contractors have been used in the construction – Jones Bros, James Cyf, William Hughes, Brunswick Iron to name a few. This has helped local employment, as will the ongoing operation. The business that the Welsh Highland, Ffestiniog and other railways bring to the local economy is estimated to be twice the annual operating costs. The objectors at Beddgelert and elsewhere are now much in the minority.

Thanks to Dr Richard Burton, Alasdair Stewart, Quentin MacDonald, Tim Maynard and others who give their time to the railway and provided information for this article. 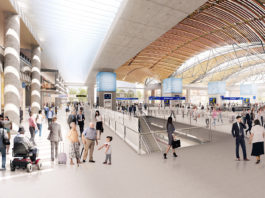 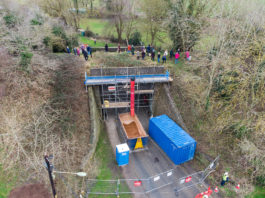 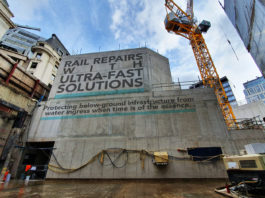