The story behind Waterloo’s major closure

The fabled lost island city of Atlantis has featured in literature, films and art, but where and what was it really? Who were its inhabitants and what endeavours were they pursuing? Amongst academia, there are many postulated theories, but no agreement.

Venture, however, no further than Waterloo station, in central London, and you will find a purpose-built Atlantis populated by engineers, designers and planners focussed on a specific major endeavour.

The Waterloo and Southwest Upgrade project is an £800 million investment by Network Rail and the Department for Transport to increase significantly the capacity for trains and passengers on that part of the railway network. This article reports on a major component of this upgrade, which is to extend platforms at Waterloo so that they can accommodate 10-car trains.

At present, 113,000 passengers arrive at Waterloo during the three-hour morning rush hour, which is the equivalent of one double-decker bus every eight seconds. The upgrade will increase this capacity to 158,000 passengers (one bus every six seconds).

Extending Platforms 1 to 4 so they can accomodate 10-car trains takes them out into an area of conflict with existing switch and crossing work. The track layout on the approach to these platforms had therefore to be remodelled and redesigned with the flexibility for trains to arrive and depart from various platforms preserved.

One possible approach to achieve this reconfiguration would be to plan a series of stageworks over many weekend possessions. Work in each possession would have been a small element in the alteration of the track layout, signalling and third rail arrangements towards the eventual final layout. Each stagework would no doubt have entailed the temporary loss of some flexibility for train movements and this pattern would have continued until all the stageworks were complete.

Therefore, a much bolder approach was adopted, which was to take the whole of the affected part of the station out of use for a 24-day period. During this major possession it would be possible to reconstruct and extend platforms and complete the necessary associated track, signalling and electrification works in one fell swoop.

The upgrade project is the responsibility of the Wessex Capacity Alliance, a partnership of Network Rail, AECOM, Mott MacDonald, Skanska and Colas Rail. Whilst each of these partners has a clear lead role – Network Rail as client, AECOM and Mott MacDonald as designers and Skanska and Colas Rail as contractors – it is apparent that it is a well-integrated partnership, with each and every participant sharing equally in planning and decision-making.

The period from the early hours of Saturday 5 August right through to Tuesday 29 August was selected as the optimum time to take possession of Platforms 1 to 10, with the closure being extended further to also include Platforms 11 to 14 for the final long weekend Friday 25 to Tuesday 29 August. Network Rail deemed that, being during the summer holidays, fewer commuters overall would be inconvenienced by this closure than at other times. Additionally, the major closure had been very well publicised for nearly a year previously, enabling regular travellers to plan accordingly.

Earlier in 2017, some major trackworks and installation of a signal gantry over Platforms 1 to 8 had already taken place outside the station approach in order, as much as possible, to reduce the volume of work to be accomplished within the August closure.

Chris Kitching, contracts engineering manager and multi-disciplinary leader for the Wessex Capacity Alliance, told Rail Engineer that the August closure itself had been years in the planning. It was found that 24 days were needed overall and, to guarantee success, two significant aspects were addressed in the detail of the planning.

Firstly, every single component of the new installation, be it a major element such as a precast platform unit, a track sleeper or even something seemingly as minor as a cable clamp, was individually numbered and referenced. This was so that each component’s place in the plan with its date and time for installation could be readily identified by all participants and not misunderstood.

Secondly, a comprehensive timeline activity programme, showing every single activity throughout the 24 days, was produced. For certain activities, particularly the more major ones, and where perhaps the time needed for completion was difficult to estimate precisely, an appropriate contingency was allowed for and built in.

Also, those activities which were found to be not on the critical path were carefully appraised for their ability to be carried out at any times when planned resources were, for some unforeseen reason, held up on their scheduled task and could be quickly and usefully diverted on to the non-critical path activity.

For all the rebuilt and extended platforms a new form of construction has been adopted. This uses a modular form of precast platform wall unit, known as the ‘C Section’ unit. For simplicity of planning and construction, the platforms were designed to use identical C Section units throughout.

The platform units have a centre of gravity such that they are temporarily stable when placed on their foundation whilst still free-standing and also, of course, permanently stable once incorporated into the completed form of platform construction. They are designed to carry the cable management systems, rail systems services on one side and building systems services such as lighting, public address, and power supplies, on the other.

A feature of the wall units is that each incorporates a small square cutout in the vertical face. This helps with ventilation under the new platforms and also provides an entry/exit point for cabling as necessary.

Before the new platform wall units could be installed, the foundation area had to be thoroughly prepared. This involved demolishing the old platforms and bases right down to the extrados of the masonry underground arches, used for London Underground access, beneath the main line station. The condition of these arches had previously been assessed from below but, during the present work, as each area was exposed, the condition of the waterproofing was checked, engineer’s inspections made and any structural or waterproofing repairs carried out before commencing on the foundation for the new platform wall units.

The strip foundations were made with rapid setting, rapid strength-gain concrete, having the ability to take the loading from the platform units only three hours after pouring.

The need for the rapid availability of the foundation was an essential part of the overall plan, providing, as it did, a sequential progression of all work from one platform end to the other, with each activity following in close succession – cast foundation, lay units, construct platform deck, excavate, reballast and relay track.

Also, to assist with the various activities following hard on each other’s heels, Combisafe barriers, sheeted with heavy duty polythene, were erected along the platform edges as work progressed. This protected those working on the track from concrete placement activity taking place at the higher level.

The new platform edge coping stones are provided with Halfen inserts, making the fixing of the Combisafe uprights straightforward.

All the precast units were brought to site on engineering trains, then offloaded and set in their final position using road-rail vehicles. With the precast wall units in place, the platform deck could be progressively constructed. This is formed of a reinforced concrete slab cast directly onto permanent sacrificial steel shuttering spanning, without propping, between the wall units. The concrete for this and the foundations was delivered by pumping from the road access adjacent to the east side of the site near to Platform 1.

From Platforms1/2 and 3/4, new stairways have been constructed to give direct access to the London Underground passageways below. The location of these stairways towards the ‘country’ end of the platforms is beyond where the main arches exist and lies in an area where the substructure consists of an arrangement of jack arches. However, a neat modification to the structural work was designed which accommodated the stairway boxes.

To complement the new platform lengths, the track layout and pointework was changed as can be seen in the accompanying diagram.

The final weekend of the closure was largely devoted to testing and commissioning of all the signalling for the new layout. This required the closure of Platforms 11 to 14 in addition to those already closed.

The original plan had been to take this additional closure from Friday 25 to Monday 28 August. The derailment of a passenger train departing from Platform 12 midway through the main works led to the need to take the extra platforms’ closure 24 hours earlier.

The derailment, now subject to a Rail Accident Investigation Branch inquiry, caused a complication in some of the ongoing signalling testing. Testers had been available throughout the works and had been working to a programme of testing according to which equipment was progressively available. It had always been the case that complete access to the relevant relay rooms and control rooms could only be gained by complete closure of Platforms 1-14 as the final stage of the overall work.

Unfortunately, the derailment caused a hiatus in the original testing regime and ultimately led to the need for the additional day’s closure of Platforms 11 to 14. This, though, was apparently the only significant change to the whole schedule of work throughout three and a half weeks.

At no time throughout the whole 24-day works was the site unstaffed. It was decided to standardise with a pattern of three nine-hour shifts for all contractors, so that every 24-hour period was consistently covered with a one hour overlap. This pattern also included the provision of the COSS (Control of Site Safety) resource, for simplicity of briefings and communication.

Typically on a shift, the staffing overall would be 20 engineers, half and half for construction and for track work, 10 supervisory staff with 100 operatives, again half and half, 20 COSS for the various work groups throughout and two or three Network Rail quality managers. Also, a design team was always available during normal daytime office hours.

Evaluation of the works programme in detail included an assessment of any issues that might arise on any module. Chris Kitching emphasised that a key element of the planning of staff resources was to ensure that, throughout the entire programme, there would be available, on every shift, engineers with the correct experience and the appropriate level of delegated authority that would enable them to make decisions there and then on the issues likely to arise.

Where and what is Atlantis?

So, finally, we come to the mystery of Atlantis.

The Alliance identified the benefit there would be in having a well-sited and equipped project site office specifically for the August closure. From concept to delivery, such a facility was completed in just twelve weeks. It is a multi-storey site office block mounted on a substantial steel framework and includes a viewing gallery.

The block acquired the nickname ‘Atlantis’ and is, in fact, an island just on the eastward edge of Waterloo station looking out over the works. Not only did it provide a major resource for all those involved in the actual work, but the gallery meant that the many visitors to the site could be shown the work in progress clearly, without the need to enter the site itself with the attendant need for PPE and site safety briefings.

Atlantis will be dismantled and its location will be handed back as part of the access route to the station, but all those who knew it will recollect the name with pride in connection with their role in an intensive and successful part of the upgrade project. 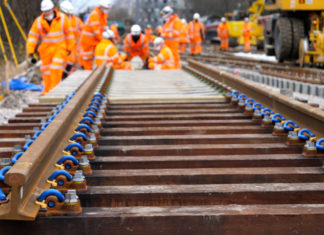 28th June 2022
Beginning and ending with a bank holiday weekend, the month of May provides a great opportunity for Network Rail to get to down to...