Rail Engineer often reports on capacity constraints, not just on the number and length of trains but on station capacity and the number of travellers that pass through. A forthcoming challenge, as passenger numbers increase, will be how to get people through ticket barriers in the minimum possible time.

Gate line barriers are now a norm at all but the most rural stations in the UK, and this is the situation in many other developed countries. Experience showed that open-access stations led to a rapid increase in fraudulent travel, with on-train ticket checks only recovering a small percentage of the lost revenue, and thus gate free stations are not an option in the foreseeable future.

The regular commuter with an electronically encoded ticket or a smart bank card knows precisely how to get through a barrier line, but the occasional traveller is often bemused by what has to be done and a sense of impatience quickly arises if one is held up by a ‘ditherer’ who searches in wallet or pockets for the correct card or piece of paper.

At main line stations, where travellers often have printed-off paper tickets as part of an advance fare promotion, the gates do not always recognise the bar code being scanned, with inevitable delay to other passengers as queues quickly form. The advent of paperless tickets further complicates the problem if an authority on a smart phone is proffered up with a fair chance of this not being recognised.

So what can be done to sort out this potentially growing situation? The RSSB has initiated a project with industry to try and find a solution that will help regular travellers in the short term and the general travelling public as a longer-term objective.

With RSSB as the client, two companies are co-operating to create a walk-through system at gate lines using ticketless technology and the latest smartphone applications.

The first of these is ByteToken, an Edinburgh subsidiary of New York- based Bytemark Inc. The company has a recognised track record in mobile ticketing solutions and has developed fare inspection systems for handheld, vehicle and point of sale applications in the general business of transport management. It has a patented product for visually validated virtual tickets (V3), incorporating a 2D bar code ticket which dynamically changes every few minutes to guard against fraud, and an NFC (Near Field Communication) solution that are all downloaded to a smartphone in a comprehensive ticketing app. The system works as a multi-modal, multi-operator ticket provider that is compatible with iOS, Android and Windows platforms.

Secondly is the Thales Revenue Collection Systems group, based in France near to Paris and part of the wider Thales organisation. It has progressed ticketing systems worldwide under the banner of ‘TRANSCITYTM’, aiming to provide easy door-to-door travel known as ‘my seamless travel’. It recognises that ticketing needs to be aligned with open system technology that allows third party integration. The concept of either a ‘Walk In, Walk Out’ area around gated barrier lines or a ‘Be In, Be Out’ detection zone in vehicles is all part of the development of innovative ticketing technologies.

To get people through gates more quickly, and thus stop queues building up, requires a logical combination of three different technologies. These are:

The aim is to remove physical user interaction with the gates such that passengers with valid tickets just walk through.

With the continuous growth in passenger travel, getting the required throughput either means increasing the number of gates, which at some stations is not possible because of space constraints, or the use of clever technology. It is this latter that ByteToken’s KeyPass mobile solution is all about.

The development so far

The individual technologies all exist, so it might be thought that merging them would be a simple task. However, this is not the case. Some of the challenges are:

The latest developments were recently demonstrated at Thales’ Crawley premises to an invited gathering of TOC revenue management and other interested parties.

One finding is that the system operates best when the ticket holder approaches the gate head on. Anyone coming in at an angle may not be correctly detected. Thus, a short channelling walkway is currently recommended to ensure optimum performance.

The Bluetooth link is probably the most challenging element. This short- range wireless application, most familiar to people as a means of hands- free communication to a mobile phone in a car, has a typical range of five to seven metres. This is far too much for a ticket gate application where a range of under a metre is needed. A combination of specially developed software from both ByteToken and Thales, that enhances the precision of the Bluetooth location working in tandem with a 3D camera, provides the necessary accurate passenger tracking.

The Bluetooth system must also be able to detect the precise location of the ticket holder. To do this, six beacons are required, two directly over the gate on a column which also has an illuminated sign to indicate that the gate is active and four on the approach walk. Software has been written to remove noisy data from the system and the 3D camera tracks passengers walking to the gate. The one-second response time for normal Bluetooth operation has had to be reduced to 50-100ms.

The Crawley room had a full-sized model of the system. Personnel equipped with an activated smart phone walked through at various speeds with the phone on different parts of their body. Even someone running was able to activate the gate just in time. Two people in close convoy, one with an activated phone, the other without could get through the barrier but the second person was detected and an alarm signal sounded.

Under normal operation, the gate will open for around 10 seconds before reclosing to protect against anyone on the slow side having the gate begin to close on them. This was demonstrated and, if a gate detects an obstruction, the alarm will sound and it will immediately re-open. Any passengers with heavy luggage or a child’s pushchair should get through in time.

The barriers can work in both directions, thus catering for morning and evening commuter flows. The exit direction is likely to be the most challenging to get right as a train with a thousand passengers all disgorging at once will be the time when the throughput rate is greatest.

Before the barrier line can go into production, more development is needed in some areas. These include:

Gates can be either swing or retract, according to what is the norm at that station. As the driving force behind the idea is to speed up the flow of regular travellers, who will quickly become familiar with the system and appreciate the benefit it can bring, it is recognised that the best initial implementation of this technology would be its deployment in a ‘Fast Track’ lane.

A pilot station will be identified in the near future where a limited deployment can take place for a defined user base. It must be remembered that this is all about throughput optimisation and not the detection of fraud, although the latter has to be part of the design.

Full marks to RSSB for identifying the future constraint and doing something about it before it becomes a real problem.

Thanks to the ByteToken and Thales staff for explaining the project and its hardware. 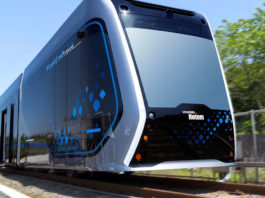 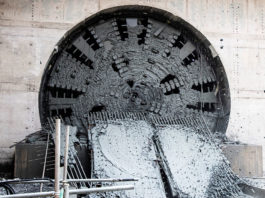 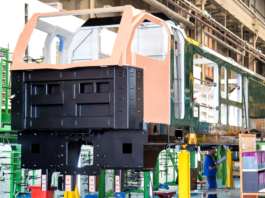