Home Infrastructure The challenge of ERTMS on the ECML

There have been many articles on ERTMS (European Rail Traffic Management System) and its component elements of ETCS (European Train Control System) and GSM-R, the radio transmission link. Most have been upbeat, confidently predicting that this is the technology to adopt for future interoperability. A minority have alluded to the problems associated with roll out and the difficult logistics that can sometimes occur.

A talk given recently to the IRSE Scottish section looked at the proposed implementation of ERTMS on the southern section of the East Coast main line (ECML) from King’s Cross to Peterborough. Unusually, the talk barely mentioned the technical aspects of ETCS but concentrated on operating challenges (Graeme Boyd from Network Rail) and the limitations of GSM-R (David MacLennan from Jacobs). Both were refreshingly honest about the system in general and the specific issues that lie ahead.

The objectives and the plan

Why is ERTMS being introduced on the ECML? There are a number of reasons. Firstly, the route comes under the category of a European TEN (Trans European Network) and thus has to comply with interoperability requirements. Secondly, it will provide a fully fledged ATP (Automatic Train Protection) system, and thirdly, because it is seen as an integral part of the forthcoming ‘digital railway’.

Whilst ERTMS is already in service on the Cambrian line (the early deployment scheme) and has been tested for interoperability on the Hertford Loop, the next projects will be on the central section of Thameslink in 2016 and on the GWML in 2018.

Although the ECML project will follow these, it is not anticipated that all known problems will have been overcome and thus it will still be regarded as a development project in terms of defining rule sets, a reference design and finalising of Network Rail standards. These difficult issues have to be resolved before ERTMS can be regarded as a standardised technology.

Before any ERTMS work can begin, the re- modelling and re-signalling of Kings Cross station is needed. The present layout dates from the mid- 1970s and is based around a number of double- slip points. These are expensive to maintain and a much simpler arrangement is being planned, which will be implemented in February 2018. Thereafter, a number of ERTMS phases are envisaged and the whole project is currently in GRIP 1-3 (output definition to selection) planning stages.

Elements of the plan

The ECML ERTMS scheme has to be integrated into a number of other projects that will be happening in the same time period. These include signalling centralisation and the introduction of the Rail Operating Centres (ROCs). For the ECML, this will be at York and will replace the existing signalling centres at King’s Cross, Peterborough, Doncaster, York and Newcastle.

At the same time, Traffic Management Systems (TMS) will be incorporated into all the ROCs and will form the intelligence for train operation and pathing, and a new National Operating Strategy will be introduced, bringing with it an associated national rule set.

Each of these has to be considered for its relationship with ERTMS including technical interfaces and timescale. Once established, the ERTMS program can be developed, a major element being the testing and commissioning strategy. For this, decisions are needed on:

» The baseline software for the ETCS element – currently at 2.3.0, it is expected to have been revised to 3.0.0 by 2018, which is important because the current baseline is not forward compatible;

» The responsibility for application data preparation;

» Determining the scope of the functional test;

» The need for an operator’s test track;

» The suitability and possible enhancement of the GSM-R radio transmission system;

» Dynamic testing of train-borne equipment; » How to carry out functional testing;

» The need for a period of shadow running;

» Future power requirements with the opportunity to rationalise the existing configuration and reduce the overall load as increased reliability is considered essential through the provision of more resilient supplies.

The transition from conventional signalling to ETCS along the route is another important factor. The current thinking is that a Movement Authority under ETCS will be issued after a train has passed a minimum of two consecutive green signals and  is expected to take 40 seconds. At 30mph, this extends to 1.6 miles but at 125mph, it will be seven miles.

The lessons from Cambrian are proving valuable, particularly the operations and maintenance elements. Building up route asset information – line speeds, gradients, stations, speed restrictions, use of imperial or metric measurements – is essential. Studying the migration strategy for other ERTMS projects will hopefully pave the way forward without too many unknowns in the equation.

It has been known for some time that the spectrum allocation of 4Mhz in both the up and down link directions is inadequate for an ETCS circuit switched connection to every train in busy locations. Even on the relatively rural Cambrian line, the availability of radio capacity has occasionally been noticed as a potential issue.

In continental Europe, the solution has been to revert to conventional signals on the approach to city centres and terminal stations. This is seen as undesirable for the UK and ETCS to the ‘buffer stops’ is very much part of the requirement. So what is the solution?

The adoption of packet switching – GPRS (General Packet Radio Service) – is the obvious answer and indeed this is being tested out on the Hertford Loop trial (issue 117, July 2014).

However, GSM-R as a voice service provision for driver-to-signaller communication will exist on the ECML long before the introduction of ETCS. Enhancing the system to provide more robust coverage is known to be needed, but there is no consensus on what the coverage levels should be. The stated minimum standard for guaranteed 95% coverage is -95 dBm for lines with speeds lower or equal to 220km/hr, but is this level high enough especially for packet switching?

The Hertford loop trial showed problems even though the computer-derived coverage plots were to the standard. It would appear that there is no substitute to having a radio survey train to get an accurate account of radio signal strength from temporary aerials erected at the nominated sites. This can be an expensive and time-consuming process.

Weather is another consideration and radio signals can vary whether it is winter or summer (tree foliage being a factor) and indeed from day to day, depending on climatic conditions.

The radio link needs to give reliable coverage at the handover points between adjacent base stations. A matrix for coverage is therefore being drawn up for the various sections of line to be encountered on the ECML and will range from plain line, including embankments and cuttings, to station areas and tunnels. Already this is showing up likely levels of between -60dBm to -85dBm at some locations with base stations in the proposed positions. Whilst only a desktop exercise at present, sufficient alarm bells are ringing for this to be a contentious issue.

Another factor is the impact of any external interference. The allocation of adjacent spectrum to other users is known to have created some performance problems in Europe and even in the UK ‘lock ups’ on the extant GSM-R network have been experienced in weaker signal areas caused, it is thought, by interference from O2 and Vodafone. Software modifications to reduce the risk of this have been put in place and it is envisaged that the next software issue for the on-board EDORs (ETCS Data Only Radios) will largely resolve the problem.

The need for GPRS is clear as, with circuit switching, the realistic maximum of six channels for ETCS train communication will be woefully insufficient and calculations show that 12 simultaneous connections are required in the busiest area. This does not take account of any radio ‘overspill’ from adjacent routes, in particular the London area, nor the additional capacity required to give greater resilience if perturbations in coverage occur.

Packet switching should enhance capacity by about eight times, which is the good news, but as yet, there is no finalised GPRS specification for ERTMS usage.

The way forward has been the creation of a national ERTMS Steering Group that comprises all involved parties within Network Rail including NRT (Network Rail Telecoms), Telent (as the fixed network supplier) and Kapsch (as the radio infrastructure contractor). The group will take account of feedback from Europe as ERTMS projects are rolled out on the continent and a set of Guidance Notes will emerge.

Whilst the final design of the radio infrastructure is not yet completed, it is likely that an additional 12 base station sites will be needed over and above the original expectation. These will require access to the current FTN fixed bearer network, which could be problematic and changing the design to access the forthcoming FTNx IP-based network is a possible solution.

As well as the capacity constraints of GSM-R, a persistent worry is how long this radio technology will last, both in terms of continuing to be in a licensed band and the ongoing supply of equipment. GSM-R is a 2G technology and, with the public mobile service now existing in 3G and increasingly 4G, manufacturers will gear up to supplying the mass markets in these bands. Just how willing they will be to supply an obsolete technology for the next decade or so remains to be seen but, whatever the situation, it is likely the price per radio unit will increase.

As to licensing, assurances have been given that the GSM-R allocation will be safeguarded until 2026 and it may be available for longer than that. Whilst this may appear a long time, it is quite short in rail investment terms and rail companies investing in ERTMS systems will rightfully expect the systems to be in service for around 20 years.

No-one knows the answer to this dilemma and, from a European perspective, it keeps getting put back in the ‘too difficult’ basket. A migration to a 4G service is visualised by some but whether this would be with a dedicated frequency allocation for railway use or by sharing the public 4G band, opinion is divided.

A shorter-term worry is the recognition that ETCS will not operate without the radio link. Whilst the design criteria will maximise the robustness the GSM-R availability, the day may come when the network fails. Keeping trains moving in such scenario represents a real challenge.

A back-up radio via the public GSM networks is one possibility but it also begs the question as to whether lineside phones need to be retained. It should be the objective to eliminate these but, when all signalling has effectively failed, telephone communication may be the last resort for keeping trains on the move, albeit rather slowly.

The ECML will not be the first main line to be equipped with ERTMS, the Great Western should have an operational system some two years before. Many of the lessons to be learned will hopefully have been teased out before the ECML changeover starts.

The current plan for ETCS Level 2, beginning in 2020, shows:

» Phase 1A – King’s Cross to Wood Green, retaining lineside signals except for the Northern City Line to Moorgate, where signals will be removed.

» Phase 1B – King’s Cross to Peterborough (Fletton Junction) without lineside signals including the Hertford Loop and the Cambridge line up to Royston. Signalled transitions will remain for the Harringey spur, the North London Incline and the Thameslink line connection. The latter, although destined for ETCS and thus a seamless transition, will have fall back signals in case of interface problems.

The provision of ETCS from King’s Cross to Doncaster is going to be a challenge for rolling stock fitment and will demand an element of captive fleet management to ensure all trains on the route are equipped.

Much is at stake with this and other ERTMS projects. Growing pains and teething problems are inevitable, both technically and operationally. One can only hope that with all the planning and evaluation work being undertaken, the introduction will be smooth. 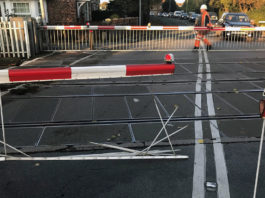