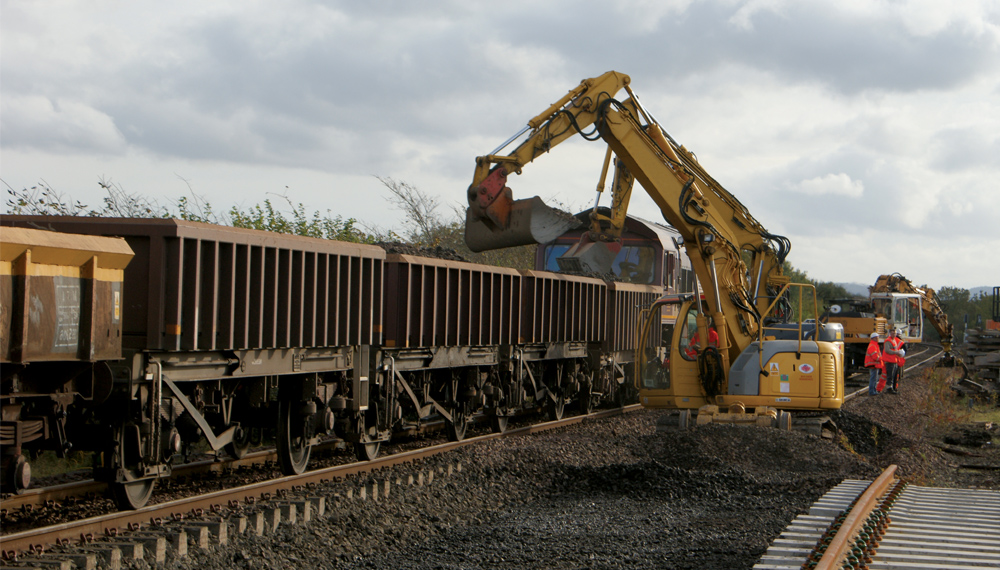 Railway engineering is an inspiring business. Few with an engineering interest can fail to be impressed by fast heavy trains, running on perfectly aligned rails winding through the landscape on imposing structures and earthworks. However it is probably true that, other than permanent way engineers, few enthuse about the stones making up the railway trackbed which are generally taken for granted. The reality is that rail ballast is a complex engineering material which has to satisfy the two competing requirements of high permeability for rapid drainage and high stiffness for efficiently spreading train loads to the sub base. This requires hard durable stone which is angular in shape with all dimensions nearly equal.

As ballast is also the largest component of a railway trackbed by weight and volume, its renewal and disposal has significant implications for the environment and other aspects of sustainability. For example, the 3 drill rigs, 2 diggers and 10 dumpers that it takes to produce 2 tons of ballast, consume 1,250 litres of diesel fuel every hour. Transport of the ballast from quarry to worksite by train also consumes one litre of diesel for every 54 ton-miles. Even disposal of waste ballast involves high landfill charges, particularly if the ballast is contaminated.

Network Rail has contracts with Aggregate Industries, Midland Quarry Products, Cemex and Lafarge Aggregates to provide ballast from their quarries. The potential value of these contracts is £90 million over five years to supply around 800,000 tonnes of ballast per year. In recent years, Network Rail has typically renewed around 400 track kilometres of ballast each year at a total cost of £16 million or £40 per metre. Significant cost and environmental savings are possible if ballast renewal can be minimised and spent ballast re-used – a fact not lost on Network Rail, who last year opened their National Track Materials Recycling Centre at Whitemoor. In addition, High Output Ballast Cleaners, and a Ballast Waste Optimisation project for conventional renewals, both maximise the amount of excavated ballast that is re-used.

Speaking at a meeting of the Institution of Occupational Health & Safety’s Glasgow and SW branch, Brian Beck, an HSQE Manager for Network Rail Scotland Asset Management, explained how track engineers and site production managers have been investigating the potential to re-use as much excavated ballast as possible during conventional track renewals. Brian explained that this was good practice in line with the waste hierarchy: Prevention; Re-use; Re-cycle; Other recovery; disposal. Once ballast requires renewal, re-using a high proportion on site satisfies an EU waste framework directive (Directive 2008/98/EC) which is now transposed into UK law. Although far preferable to disposal, re-cycling ballast, for example for use as road aggregates, requires energy for transport and conversion and is therefore lower in the hierarchy than re-use.

Ballast deterioration is due to stones eroding over prolonged periods and high stress, particularly under sleepers, and contamination by fine particles from both the sub base and from trains (oil, brake dust, toilet waste, and spillage of bulk materials carried). As this deterioration is not uniform, a high percentage of ballast within the trackbed need not be renewed. Shoulder and crib ballast (that between the sleepers) does not suffer high stress, and recent developments such as retention toilets, reduction in cast iron tread brakes and enclosed wagons, have reduced ballast contamination. In addition, upward migration of fines from the subgrade has been reduced with the use of improved geotextiles.

The challenge is for engineers to identify old ballast that meets Network Rail’s track standards and for site managers to separate out and re-use this ballast within demanding possession timescales. Brian estimates that experience to date shows that at least 25% of ballast could be retained. As well as the environmental benefits, he estimated that this offers annual material cost savings of around £4 million. Additionally, emissions data indicates that savings of up to 12,000 tonnes of CO2 equivalent could be possible from the transport aspects alone. Brian also mentioned that one supplier considered that, should ballast waste optimisation techniques be applied effectively, the estimated 30 year life of his quarry could be extended by a further 7 years.

Although, for conventional track renewals, the ballast optimisation project potentially offers significant environmental benefits, the real prize comes from the use of High Output Ballast Cleaners (HOBC). Under favourable conditions a HOBC will reuse over 50% of the existing ballast. Network Rail acquired its first HOBCs in 2005, and one is based at Whitemoor adjacent to the new rail recycling centre. This HOBC is an RM 900 RT supplied by Plasser and Theurer. It weighs 3,200 tonnes, is 780 metres long, requires a crew of 26, and is worth £25 million.

The HOBC excavates ballast from beneath the track whilst holding it in position and passes the excavated material through vibrating sieves to remove “fines” to wagons in the train. It then returns much of the excavated ballast to the track, topped up as necessary with new ballast from other wagons within the train. This is done at a speed of 0.25 mph, enabling up to 600 metres of ballast to be treated within a typical midweek possession. Since 2010, all Network Rail’s high output track plant, including track renewal machines as well as HOBCs, have been operated and maintained by Amey Colas under a 5 year contract.

At its busiest, Whitemoor marshalling yard in Cambridgeshire (above) was one of the largest in Europe. Such was its importance that, in World War 2, a dummy marshalling yard was created four miles away to fool German bombers. With the demise of wagonload freight, the large Whitemoor yard closed in the early 1990s and became derelict. A £20 million investment by Network Rail reversed this decline in 2004 by transforming the yard into a track supply depot which recycled 200,000 tonnes of ballast per year.

In July 2011 Network Rail’s National Track Materials Recycling Centre (NTMRC) was opened at Whitemoor adjacent to the “phase 1” facility (the rail engineer issue 79, May 2011). This new centre covers 40 hectares (100 acres) of formerly derelict land and is processing 500 miles of used rail, 800 switches and crossings and 50,000 tonnes of contaminated ballast which the phase 1 facility had previously sent to landfill. With a new hazardous waste washing facility, only 4% of the contaminated ballast is now disposed of, resulting in landfill savings of £5 million per year.

C Spencer was the Principal Contractor for construction of the NTMRC which was built using 125,000 tonnes of recycled ballast from the adjacent “phase 1” facility. The project also included a rainwater capture system for ballast washing and dust suppression. Other environmental mitigation measures during construction included the promotion of environmental diversity with a new drainage pond for great crested newts, and archaeological surveys taking some months, of a roman road, pre-WW1 artefacts and WWII air raid shelters.

Like Network Rail, London Underground is striving to increase the amount of ballast that it recycles. To do this a Used Ballast Risk Assessment Protocol is applied to waste from track works. This maximises recycling of the ballast and minimises waste management costs. This risk assessment was developed by Wardell Armstrong and takes account of London Underground’s trackbed being significantly less contaminated than the national rail network. Paul Taylor of Wardell Armstrong explains, “Tube ballast is subjected to fewer chemicals. The Underground uses electric power and is not affected by coal and other materials carried on the national network.”

Surprisingly, most of London Underground is overground. 58%, or 146 miles, of the 253 mile network is overground with ballasted track. Each year Transport for London replaces around 100,000 tonnes of ballast. In 2005 around 45% of this ballast was sent to landfill and 2% disposed of as contaminated hazardous waste. Today, Transport for London re-uses or re-cycles 97% of its ballast resulting in savings of about £300,000 per annum. Much of the credit for this reduction in waste goes to Balfour Beatty Rail, who developed an innovative technique to treat inert ballast that previously could not be reused as it contained excessive clay or geotextile sheeting.

Prior to its demise in 2008, Metronet developed a ballast bioremediation process to treat oily ballast. Certain micro-organisms treat grease as a food source, breaking down the contaminants into carbon dioxide and water. When accelerated with natural catalysts, this process cleans up contaminated ballast allowing it to be re-used as aggregates for road construction.

Recently the bioremediation technique was successfully used to treat contaminated ballast at St Phillip’s Marsh Depot in Bristol. It had not previously been used to clean ballast in situ, until depot operators First Great Western (FGW), bioremediation specialists Waste Management Total Solutions (WTMS) and Soil Mechanics, a part of Environmental Scientifics Group, who performed the laboratory testing, decided to conduct a trial.

This involved spraying a mix of biocatalysts and nutrients onto the oily ballast and resulted in a quantifiable decrease in hydrocarbon concentrations after treatment and a reduction in the depth of contamination. “Bioremediation is an established method of treatment, but it has never been used in this context before. We were delighted with the results”, explained WMTS Operations Director Peter Nicholas.

A weighty contribution to sustainability

Network Rail, London Underground and others clearly recognise that the huge tonnages of rail ballast renewed each year present a great opportunity to reduce the environmental impact of engineering work. Ballast re-use and re-cycling follows the waste hierarchy and is delivering commitments in Network Rail’s sustainability policy which covers three distinct areas: Social, Economic and Environmental. Whilst the environmental benefits are perhaps obvious, a reduction in ballast transported off site and in use as new ballast offers great economic savings and gives a social benefit by minimising both employee risk exposure and impact on the local community.

Most of us may not give railway ballast a second thought, but those who do, and are involved in its treatment, are making a weighty contribution to the sustainability of the rail network.