The first three of the new Class 800/801 trains, being built by Hitachi for the IEP (Intercity Express Programme), have arrived in the country. In addition, the new factory in Newton Aycliffe, County Durham, has been opened by the Prime Minister and is now being fitted out to produce the bulk of the fleet.

So attention naturally turns to the depots that will house and maintain the trains once they enter service, and even before that in the latter stages of testing and route familiarisation. Three new depots are being built, at Stoke Gifford (near Bristol) and Maliphant (Swansea) for the Great Western fleet, and at Doncaster for the East Coast. In addition, the former Eurostar depot at North Pole, near Old Oak Common, is being heavily refurbished to take the new fleet.

Integrated into these depots are safety systems developed by Sheffield-based Zonegreen. The market leading rail safety specialist’s new generation SMART Depot Personnel Protection System (DPPSTM), launched earlier this year, has been chosen by Hitachi and contractor VolkerFitzpatrick for all four of the new IEP maintenance facilities. It is tailored to each depot’s layout and controls vehicle movements, protecting staff and infrastructure, whilst increasing the ease with which depot operations are performed.

DPPS is already in place at the two-road Maliphant facility and its larger counterpart, North Pole, where it will be used to bring vehicles in and out on six roads that have interlocks with gantry gates, two bogie drops, a wheel lathe and fume extractors. The depot is receiving two variants of Hitachi Rail Europe Super Express trains – bi-mode Class 800s and electric Class 801s – that will replace the 40-year-old high speed diesel trains currently in operation on the Great Western and East Coast main lines.

Work is underway to install DPPS at Stoke Gifford, another two-road depot that will be equipped with interlocking with gantry gates, two bogie drops, mono rail cranes, overhead lines and protection systems for an underfloor carriage wash and wheel lathe road. Doncaster will be the final IEP depot to receive Zonegreen’s system and its engineers are in the process of agreeing designs with main contractor, VolkerFitzpatrick.

Christian Fletcher, Zonegreen’s technical director, said: “Although the four installations will look and feel similar, they are configured specifically to meet the needs of each IEP depot. Hitachi was already familiar with DPPS, as it is currently in operation in its Ashford depot, but it will now benefit from improvements we have made to the new generation system, which is even safer than its predecessor.

“This latest version enables users to stay abreast of developments in personnel safety and benefit from future changes as soon as we make them. It also delivers increased reliability, a key consideration when specifying depots that will be under pressure to return vehicles to service as quickly as possible.”

Designed with export in mind, the next generation DPPS offers intuitive functionality based on a four-button controller and a graphical interface that can be programmed in any language, accommodating characters and letters. It is operated using personnel datakeys and combines powered derailers, road end control panels, train detection equipment and warning signals.

Zonegreen has invested many hundreds of thousands of pounds in its new generation system. A host of additional features have been added, following six years in development, and it is now simpler to implement and use and more efficient to run. Remote configuration and assistance has also been added, making overseas installations straightforward and cost effective.

The customer-centric focus of this new protection system extends to its design, which is more ergonomic than its predecessor. A tactile membrane has improved durability, whilst high quality electronic components have reduced power consumption, delivering further cost savings.

By continuing to utilise distributed intelligent technologies, Zonegreen has also ensured that, if an error is detected on one road, normal operation can continue throughout the rest of the depot. This minimises disruption and represents a significant advantage over traditional project life cycle (PLC) systems.

Standardised software is used to run DPPS, which means it can still be configured to the unique layout of each facility, but depots benefit from years of extensive development and testing. Every installation comprises hardware and software that has been verified independently and complies with safety standards, as defined in IEC61508 and EN50128/50129, as well as current electromagnetic compatibility (EMC) railway guidelines. In addition, it is easier for Zonegreen to share new features and updates with existing and future clients.

Like the personnel datakeys that operate DPPS, the engineer’s datakey can be programmed with a depot’s layout and used to transfer data to the equipment when inserted, minimising installation time. The datakeys have changed in appearance, whilst additional levels of access have been added, providing improved encryption and security. Temporary keys are available for the first time, granting access for a limited period and, therefore, mitigating the distribution of duplicates, should a member of staff forget their original.

All software is tested rigorously and repeatedly by Zonegreen’s in-house experts to reduce the risk of errors and continued testing is carried out after installation. For example, if power is cut to the derailer, a message will appear informing the user of this change in status.

Christian Fletcher concluded: “These are exciting times for Zonegreen. We have the technology to vastly improve working conditions for depot staff and word is spreading about our capabilities worldwide.

“Although progress is being made within the rail industry, occupational health remains a considerable concern. We believe maintenance facilities should be doing all they can to protect workers and we are dedicated to developing innovative systems that not only respond to the needs of rail operators, but also have the flexibility to adapt to this rapidly changing environment.

“International partners and existing clients are helping us shape the future of depot safety and we believe our latest version of DPPS spearheads a product range that has the potential to transform the industry’s health and safety record.”

The enduring success of DPPS has prompted Zonegreen to develop a range of complementary products, including Operator Planning Suite (OPS). This web-based application is designed to replace the traditional whiteboard, providing increased efficiency and cost effective maintenance planning.

OPS consists of two main screens – an easy to visualise graphic of the depot on which users can position trains and create or assign tasks, plus a tabular layout to plan scheduled arrivals and departures. The data is held on cloud- based technology and can be transmitted to monitors positioned in strategic locations, providing accurate updates about any vehicle.

This multi user system provides seamless management of maintenance activity and collation of information from which reports can be generated, reducing manual tasks and paperwork. 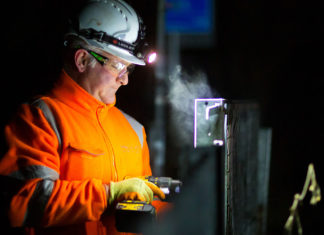