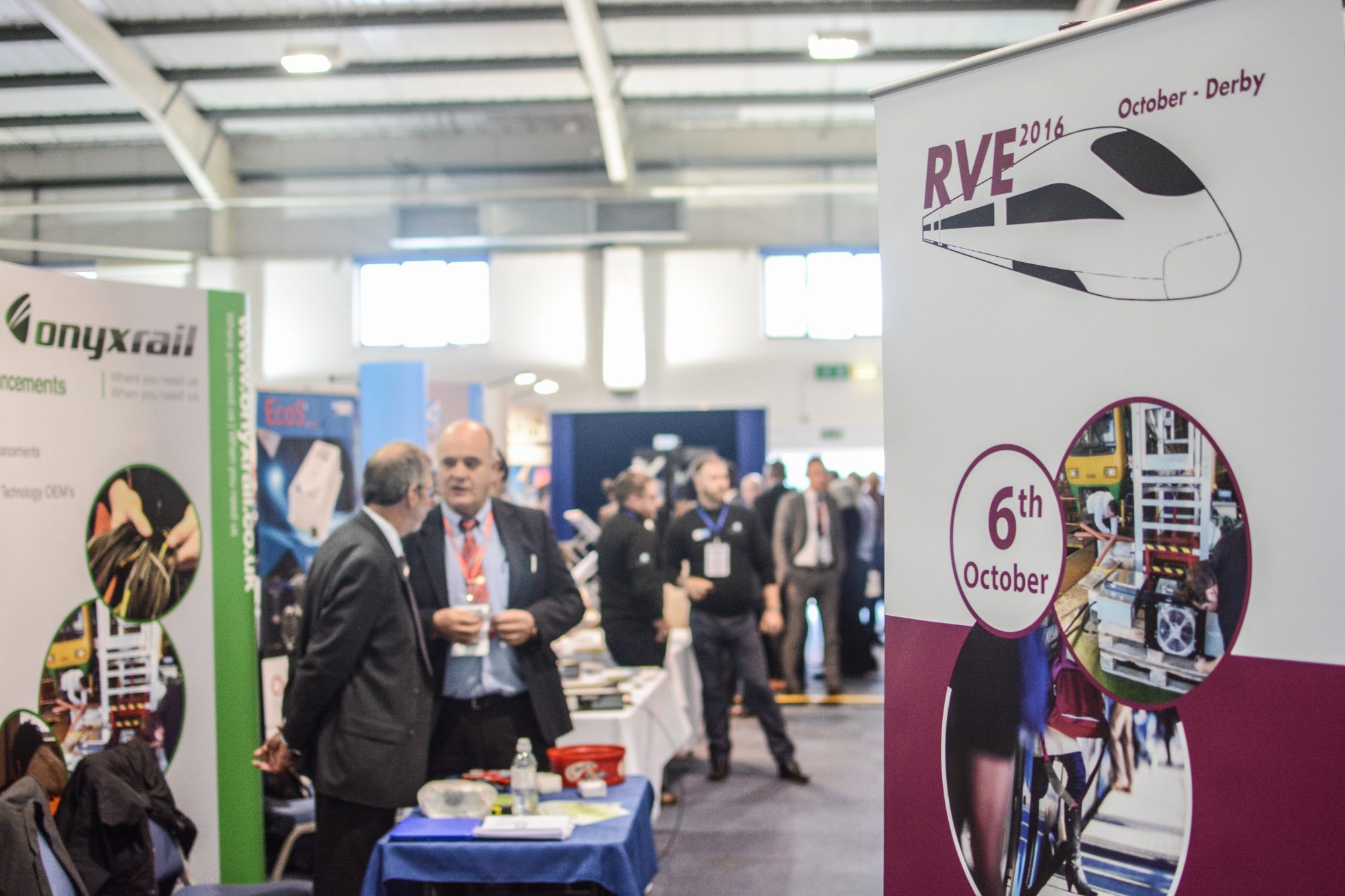 Writing about the 2015 RVE exhibition in Rail Engineer (issue 133, November 2015), Nigel Wordsworth called it “the best yet”. I was there last year too, and this year was even better. Coming just two weeks after the huge InnoTrans exhibition (where I kept getting lost!), it clearly illustrated the value of a “smaller, but perfectly formed” exhibition. It did exactly what it said on the tin, bringing together, under one roof, many of the suppliers who can help enhance rail vehicles.

Held at Derby’s Riverside Centre, just across the way from Derby County’s football ground, it was organised by Onyxrail, whose managing director, Kevin Lane, is someone I first worked with when he was at Metro Cammell 30 years ago!

There was a large area for exhibitors with space to chat. A series of lectures were given in an adjacent room, once again presided over by journalist Ian Walmsley, whose often controversial views are published elsewhere. His keynote is an annual treat; always up to date and relevant, but delivered with a wicked sense of humour.

Ian gave a very important message about how the industry has changed in just a year. Last year, there was a lot of confidence that the way forward was to be life extension of mid-life rail vehicles with enhanced performance and passenger amenity to deliver the service customers would want. What actually happened is that the quality requirement in recent franchise competitions has led to the successful bidders buying new trains. As a result, even some quite recent trains will shortly be replaced. No doubt these trains will cascade to other operators, opening opportunities for refreshment, refurbishment and technical uplifts.

From the proliferation of innovative and relevant exhibitors, it was clear that requirements are changing in the rail vehicle enhancements business. When I was involved in the work – indeed helped to create the industry with the London Underground refurbishments in the 1990s – enhancements were typically just to electrical systems and fixtures and fittings. In the modern railway, electronics, networks, 4G, Wi-Fi and information systems have become a very significant part of the work and were heavily represented alongside the more traditional suppliers of labour, interior fittings and seats.

To avoid this being a travelogue of the exhibition, I’ll refer readers to the RVE website and concentrate on the exhibitors that caught my eye.

Infodev was showing its real time passenger counting system. I spoke to Pierre Deslauriers, the company’s CEO, and discussed the accuracy of his system, having been highly skeptical about such devices in the past. He explained that, generally, his company recommends to customers that they do a trial and monitor the sensors using video cameras to confirm for themselves that 99% accuracy – Infodev’s claim – can be achieved. Needless to say he has many satisfied customers. Having counted people on and off, the information can be used both to inform customers how busy the train is and to build very accurate data for the operator on how its services are used. This can be used in making tactical control decisions as well as for the strategic planning of services. Pierre told me that the latest application is on Scotrail where the installation is being carried out by partners Onyxrail.

I moved on to Televic Rail, whose elaborate stand of passenger information displays included the wide-screen unit seen on the latest Siemens Class 700 and 707 EMUs. Also amongst the displays were the neat little seat reservation indicators which will be used on the Intercity Express trains. Compared with previous electronic reservation displays, these looked much more eye catching.

Whilst the displays are the primary product of the company, the value to train operators is provided by Televic’s LiveCom system, which allows them to generate or edit content and, using iSync hardware and software, to send that information directly to the train or trains concerned. Thus the displayed information is no longer limited to what has been loaded onto the system in the depot. iSync can also be added to existing trains to facilitate the export of data from on-train systems to a centralised server.

Next was Diagnostyx – a partnership of Arrowvale, SNC-Lavalin and Clyx.net which provides an on-train data logger, transmission facilities, engineering, installation, application support, and cloud data hosting.

These systems will deliver benefit if information can be distributed or collected via a network. More and more legacy fleets are being equipped with Ethernet networks which can, for example, distribute passenger information, and provide customer Wi-Fi. There is also the possibility of connecting any suitably equipped systems, such as the on-train monitor recorder, for remote downloads.

Ciesse introduced its RailWare EcoS system, an energy monitoring system that works in real time to the latest European standards. Designed to interface with other systems, it can be used to provide drivers with information about energy consumption. Since it monitors voltage in high resolution, it also gives an indication of pantograph performance. Once data is downloaded, it can be analysed in a variety of ways, for example, to identify different driving styles.

I met Alan Stewart from Perpetuum, whose product is most usually employed to monitor axlebox vibrations powered by energy harvested from the vibrations themselves. The tiny amount of power generated, approximately 80mW, is sufficient to operate a small circuit that records the output of a triaxial accelerometer and send this information wirelessly to a train mounted data accumulator. This information, together with other data such as train position, is sent back to base where it can be used to identify issues with wheel bearings, wheels themselves and also the track condition. Each time I speak to Perpetuum, they have something new to talk about, most recently the ability to detect wheel flats and a forthcoming development of their bearing sensor.

Dellner had an automatic coupler on display. I am used to the relatively simple London Underground Wedglock automatic-coupler, and I found it instructive to learn how complex a modern auto coupler can be; an electro- mechanical device which has to survive in possibly the most exposed location on the train. For Dellner, just getting its demonstrator into the hall was a challenge as it weighs about 500kg!

Whilst I found out a lot about how a coupler works, the purpose of the display was to demonstrate the benefit of retrofitting existing couplers with heating elements to ensure that they don’t freeze in winter and to help keep the electrical contacts dry. It was very impressive to feel by touch and to see by thermal image camera how quickly the heating elements work.

I recalled trials of aromas on the East London line of the Underground in the 1990s that received much derision from the press. I hadn’t imagined that aromas had reappeared until I walked up to the Signature Aromas stand (Kevin said they’re not to be sniffed at – groan!) and realised that I was familiar with the smells, indicating that a number of operators are using those products to improve the customer ambience.

Apparently, one operator changes the aroma depending on the season and, of course, they have a ready use to counteract the less pleasant smells in toilets! Who wants to be on a smelly train when you can be wafted to paradise with the fragrance of jasmine?

Trolex had on display some LED lamps in the format of fluorescent tubes, with all the electronic components inside to allow them to be fed from 24V or 110V DC. Whilst there is still a cost premium for LED over conventional lamps, it is my view that it would be madness not to use LED lamps throughout for new trains, and there is a good case for retrofit on existing trains despite both the higher cost of the lamps and a one-off cost to remove existing fluorescent lamp control gear. Apart from the reduced maintenance required by LED lamps, the reduction in energy consumption can produce environmental benefits or, in some cases, reduce the load on supplies with marginal capacity to provide headroom for new systems such as Passenger Information Systems or Ethernet networks.

Strukton Rolling Stock was displaying its power converter modules and a three-phase drive module for use in a shunting locomotive. The approach is to configure standard circuit designs to meet the individual customer’s needs. One example is the DC:DC chopper provided for the Vivarail conversion of the former London Underground District line trains to diesel-electric operation.

So far, I haven’t talked about the traditional suppliers to rail vehicle enhancement projects, such as interiors, seats and upholstery. I bumped into Keith Griffiths, who I worked with on the Victoria line 1967 stock refurbishment over 25 years ago. He is with the I M Kelly Group which was showing off both its own train driver’s seat and the LEAN2C passenger seats from Fisa in Italy. The aim of this seat was to look and feel comfortable whilst providing a recess in the seat back to accommodate the knees of the passenger sitting behind. The recess also allows the seat to meet all the UK structural requirements whilst being lightweight.

McAuley from Northern Ireland supply interiors and grab poles internationally. Getting lightweight grab poles to meet all the structural requirements, applying hard wearing finishes and compliance with the TSI for People of Reduced Mobility or the Rail Vehicle Accessibility Regulations, is far from trivial. Moreover, as trains get more crowded, there tend to be more handrails as everyone must have something to hang on to!

Muirhead high performance leather had a very simple stand; bar chairs upon which an array of leather swatches were spread. I thought this was incredibly effective, as it is the colours and feel of the material that sells it.

One must not forget the suppliers who carry out the engineering, installation and homologation of the various enhancements. These included:

Providing exceptional added value to visitors were presentations from representatives of the Department for Business, Energy and Industrial Strategy; Wabtec; Ciesse; Ricardo Rail, Rail and Road Protec; York EMC; Eversholt and Hitachi, covering subjects as diverse as the opportunities to improve fleet performance though to the performance of ETCS equipment on class 37 locomotives.

As the show organiser, Kevin Lane was very excited about this year’s show. He said that he is consistently surprised and encouraged by its growth in terms of the breadth of products and the calibre of the companies that choose to exhibit at RVE. He added that the forum which runs alongside has offered some excellent technical papers that provide an informative view on the opportunities available to train operators and train owners.

It was clear that Kevin is ambitious for the future. He said: “2016 marks a major phase of development for the show and our intention is to double the size of the show for 2017.” He was full of praise for the support of Wabtec Group as sponsors, the help provided by of the Department for International Trade, the loyalty of the Rail Alliance to the show and media partner Rail Media. Their support underpins RVE as the show for those seeking the best railway products and services that the supply chain can offer.

So RVE 2016 is over, and organisation has already started for 2017. It’s planned to take place on Thursday 5 October 2017 at a new venue, the Derby Velodrome. See you there.