London Victoria is one of the busiest mainline stations on the railway network. Every year, over 73 million people either enter or leave the station which, if you do the maths, works out to over 100,000 per day in each direction.

A lot of those 100,000 arrivals go straight down the stairs into the Victoria Underground Station. When added to the people who have come into the underground by other means, on foot from Westminster, by bus to the nearby Victoria bus and coach stations, it is not surprising that Victoria is the second busiest station on London Underground’s network.

So what do passengers find when they get there?

The Victoria line ticket hall is small and frequently congested, with only three escalators leading onto the platforms – one down and two up. A passageway leads to the original District line ticket hall, with steps down to that platform. There is a second route along that District line platform and down at the other end to reach the Victoria line. There is no step-free access to the platforms.

It really isn’t sustainable for a station already handling 82 million passengers a year, not to mention the millions of others who interchange between the two lines. London Underground realises this and a £700 million expansion is underway. Some of it is already visible.

Along the southern edge of the Victoria line ticket hall, in what will become known as the South Ticket Hall, is a row of hoardings. Behind those, the area is being expanded to over twice its size. The extent of this can be seen in the main line station forecourt where another ring of hoardings marks out the approximate dimensions of the future cut-and-cover excavation.

A little way away, more hoardings mark out the site of the brand new North Ticket Hall which will serve the other end of the Victoria line platforms. This ticket hall, like the South, will also be built in a conventional top down piled box construction, with the two new halls linked by a series of bored tunnels and with systems such as CCTV and public address integrated into the overall modernised station layout.

That, simply, is the programme. However, being in a crowded city, there are complications.

Keeping in with the neighbours

First of all, there are the neighbours. The Victoria Palace Theatre is a grade II listed building and the Apollo Victoria is grade II*. Both have regular stage performances – the Victoria Palace is currently staging the successful Billy Elliot musical while the Apollo is home to Wicked. These can’t be interrupted, so noisy works have to be scheduled to account for that.

Another major neighbour is, of course, the Network Rail main line station. Putting up the hoardings for the new South Ticket Hall blocked off the Victory Arch access to the station so a new one had to be created. After negotiation with both Network Rail and the retailer concerned, a walkway was driven through a Boots store on Wilton Road.

The same hoardings blocked off the Underground’s own access stairs on Wilton Road. To compensate, the Sussex Stairs, outside the main line station front entrance, were doubled in size by adding a second flight alongside the original.

The second problem is the ground conditions. When the Victoria line was built in the 1960s, it was driven through London Clay with the crown of the tunnel around 14 metres below ground level. However, the cut-and-cover ticket halls will be at a much shallower level than that. A few hundred years ago, the area in front of Victoria station was a beach. A tributary of the Tyburn river, which is now buried as the Kings Scholars Pond Sewer, flowed past the spot. As a result, the ground is a mixture of sand and river gravels.

Being a well-developed part of the city, those sands and gravels are full of utilities. Sewers, power cables, telephone cables, gas pipes, water mains, internet links, CCTV feeds – the list is almost endless. And they all run under the roads and pavements in the area.

London Underground could have dealt with all these complications by private treaty. However, due to the extent of the challenge, it was decided to go for the Transport and Works Act (TWA) route. This gave London Underground both the powers to acquire land for the purposes of building the scheme and the power to operate it afterwards. The latest 2006 TWA includes more provisions for consultation, so various stakeholders had to be brought into the discussions, and the TWA submission was made in November 2007. A public enquiry was held between October 2008 and January 2009, and powers were granted in September 2009.

Glenn Keelan, programme manager for the upgrade project, firmly believes that London Underground should be a good neighbour as well as having legal powers to push things through. He spearheaded discussions with the theatres to make sure that their needs were fully catered for, including provision for scheduled quiet times on site to avoid disrupting scheduled shows and occasional extra performances.

Mott MacDonald has been involved in the project as designer since 2006. Following a tender process under OJEU (the Official Journal of the European Union) guidelines, the Taylor Woodrow/BAM Nuttall joint venture was appointed as main contractor for design and delivery. The existing Mott MacDonald design team was novated over to the JV.

Design was always carried out using 3D CAD-plus techniques, which are now further enhanced and have become BIM (Building Information Modelling). The complications of the site have made this the most effective way to process the volume of information, and indeed the project team won a recent British Construction Industry award for BIM project application.

The varying make-up of the ground could have been another headache. Piling would hold back the ground around the excavated areas but tunnelling the passenger walkways looked like being a problem. However, the decision was taken to use a method known as ‘jet grouting’. In effect, the aggregates in the ground are combined with a cement-like grout to form in-situ concrete.

The first step is to install a row of guide tubes. These set the spacing and, as the name suggests, act as guides for the main drilling process.

The drill itself is hollow, with a perforated outer casing. Once it is in place, grout is forced down the rotating shaft and out through the holes at high pressure which mixes it with the aggregates in the ground. The holes are spaced so that the resulting columns overlap, forming a solid block through which the tunnels can be safely bored.

Although fairly new to the UK, the process has been used on the continent before, and specialist contractor Keller was brought in to undertake this part of the work.

The North Ticket Hall is not scheduled to open until 2016, and the extended South Ticket Hall two years later. Work is already well advanced. 1,200 guide tubes are in place and jet grout columns are being installed below ground.

A row of conventional secant piles has been installed alongside Bressenden Place. In this technique, a row of concrete ‘female’ piles is installed first with small gaps between them. A hole is then drilled between them, keying into the concrete on both sides, and a ‘male’ pile inserted to bridge the gap, forming a continuous wall.

Seventeen large plunge columns will also be inserted into the area of the North Ticket Hall so that buildings can go over it on completion. With various recent developments in the area such as the nearby Cardinal Place, it is highly likely that a new similar property could be built over the finished site.

Prior to TWA powers being granted, and before the construction contract was placed, London Underground dealt with extensive existing asbestos in the station. Some of this was in the form of Amosite panels which were in good condition and didn’t pose a significant risk. However, there was also an amount of Cellactite, an asbestos flock that was sprayed onto beams as fireproofing, and it all had to come out so that the new ticket halls could be joined with the old.

That, more or less, is the story so far. One vertical shaft has also been bored, shaft 2 which will include the emergency services lift access in the finished station. Further access shafts will be constructed, and from these the various access tunnels will be constructed using tunnel boring machines and spray-concrete linings.

It will all be some time before the seven new Schindler lifts and nine escalators are in place and the new ticket halls are open. There will be plenty of opportunities for the rail engineer to go back and have another look.

Nigel Wordsworth BSc(Hons) MCIJhttp://therailengineer.com
SPECIALIST AREAS Rolling stock, mechanical equipment, project reports, executive interviews Nigel Wordsworth graduated with an honours degree in Mechanical Engineering from Nottingham University, after which he joined the American aerospace and industrial fastener group SPS Technologies. After a short time at the research laboratories in Pennsylvania, USA, Nigel became responsible for applications engineering to industry in the UK and Western Europe. At this time he advised on various engineering projects, from Formula 1 to machine tools, including a particularly problematic area of bogie design for the HST. A move to the power generation and offshore oil supply sector followed as Nigel became director of Entwistle-Sandiacre, a subsidiary of the Australian-owned group Aurora plc. At the same time, Nigel spent ten years as a Technical Commissioner with the RAC Motor Sports Association, responsible for drafting and enforcing technical regulations for national and international motor racing series. Joining Rail Engineer in 2008, Nigel’s first assignment was a report on new three-dimensional mobile mapping and surveying equipment, swiftly followed by a look at vegetation control machinery. He continues to write on a variety of topics for most issues.
Previous articleSpain at high speed
Next articleTottenham Court Road Station upgrade project

Campaigners fight to save hundreds of disused railway structures threatened with infilling or demolition. Scattered across our nation are relics of the transport revolution brought...
Read more
Infrastructure

Protecting below-ground infrastructure from water ingress when time is of the essence. Whether its concrete repair, rail fixing, chemical anchoring or bridge strengthening, most jobs...
Read more 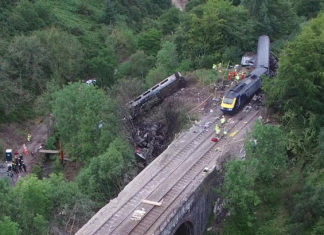