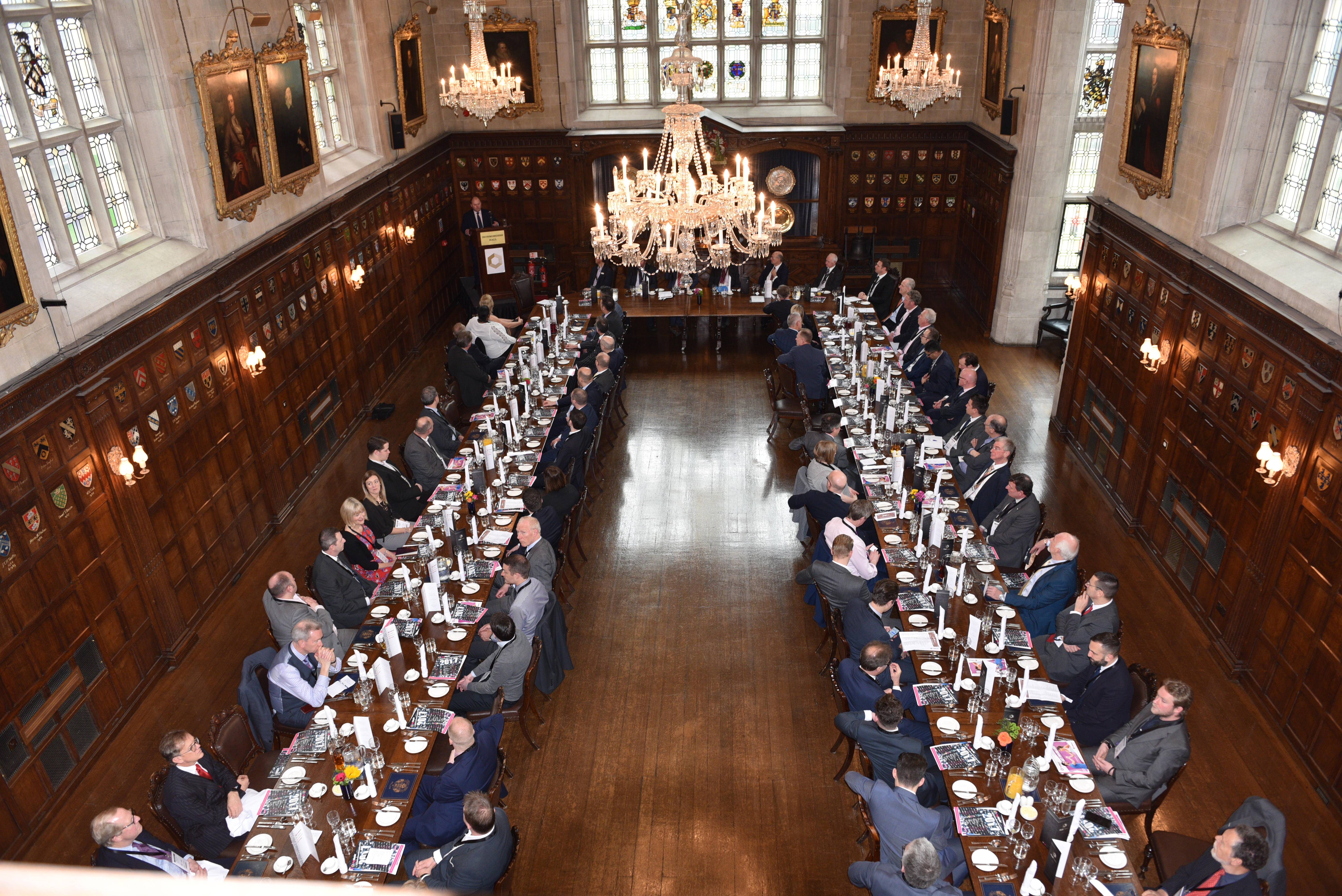 Early records suggest that the Ironmongers’ Guild was an effective body in 1300 when they took action against the blacksmiths of Kent and Sussex over the quality of iron supplied for cart wheels in the City of London. Today, it is no longer a standards body for the iron industry but remains one of London’s twelve great livery companies whose main work is now the administration of charitable trusts, as well as being deeply involved in the pageantry of the City.

The Ironmongers’ Hall therefore provided a splendid venue for the recent Rail Exec Club meeting which was attended by eighty senior rail professionals from 35 companies. This provided a networking opportunity over the drinks reception followed by a four-course luncheon to the accompaniment of award winning pianist Michael Sikich of the Guildhall School of Music & Drama.

Before and after the lunch, the Rail Exec Club’s three speakers addressed the need for change and innovation. Professor Peter Hansford has recently been commissioned by Network Rail to lead a review of alternative project delivery models. Eric Holmes of Bombardier and Nick Dunne of Siemens both spoke about the benefits to their companies and the rail industry from specific innovations.

As a past president of the Institution of Civil Engineers and former chief construction adviser to the Government, Professor Peter Hansford is well qualified to lead a review of rail projects. In his speech, he explained that his study is to consider how rail infrastructure can be funded, developed and built by parties beyond Network Rail. He also felt that, compared with automotive and aerospace, there was limited innovation within the rail industry.

He is convinced that, if the rail industry is to grow as required, it must find ways of encouraging third party investment and infrastructure delivery. To do so, his review is identifying what is getting in the way of outside party involvement and will consider how these barriers can be removed or, as he put it, “we must try to unravel the complexity of railway projects.”

The Hansford review was commissioned in December. Peter advised that, to support him in this work, he has appointed a panel of “six wise men and women” who bring experience from rail industry and other industries. Three of them – Amey group chief executive Andy Milner, Matthew Symes (Concerto) and Mike Gerrard – were present at the lunch and networking with guests.

Consultants from the Nichols Group are also supporting the review.

A call for evidence to be submitted in confidence was issued just before Christmas. The resulting response was “amazing” and required the deadline to be extended by two weeks. The review team is also considering case studies of projects that have, and have not, worked, as well as holding an industry seminar and meeting various parties to gather evidence.

Peter considers his goal is to “create conditions to grow, operate and maintain a railway network that keeps its customers, both passengers and freight, at its very heart.” He expects that his review will recommend practical measures to support this aim.

Professor Hansford is to present his findings to the Network Rail board in May, after which his review team will produce a final report.

The second speaker of the day was Eric Holmes, who has been with Bombardier since 1998 and is now head of global bid support services, having previously been responsible for the development of new innovative products and services. His message was that achieving the required cost reductions and increases in capacity will require the best use of future technology.

As far as rolling stock is concerned, this aspiration is supported by a change in rolling stock procurement strategy which now takes account of whole-life costs, of which capital cost is typically a third. Hence energy consumption, maintenance requirements and track damage are now significant factors in the selection of rolling stock. Eric explained that, as a result, there is now a business case for automatic vehicle inspection systems which, when combined with integrated vehicle health management and diagnostic software, offer significant maintenance savings by using condition data instead of manual inspection. However, such a departure from current practice requires significant investment in verification, validation and approval.

He advised that, compared with the Electrostars, this approach will enable the Crossrail Aventra train to operate for fifty per cent longer between examinations with a one-third labour saving per exam.

Eric outlined other Bombardier innovations which offered sustainability benefits and improved the company’s own business processes. His key messages were that appropriate technology must be identified for each application, that innovation only delivers real value if a pull is created within the receiving organisation and that it requires highly motivated individuals who can articulate vision on the ground.

The What and the How

The final speaker was Nick Dunne, who is director of technology for Siemens Rail Automation. As such, he is responsible for the Siemens UK technology strategy for signalling and communications. He felt that the industry was at a major turning point and had to make a step change by doing something different both in terms of technology and project delivery.

He stressed that this is about both the ‘What’ and the ‘How’ as, with the complexity of our railway system, the How will dictate the What. To focus on the delivery of something that will provide extra capacity, without adequate consideration of the processes and technologies to maintain a 24/7 service during the project, is a recipe for failure.

One example of the ‘How’ is the object controllers for signals, which Nick advised were essential for the delivery of the Thameslink scheme and also provide richer data about the state of the railway. He was proud of the way Siemens had worked closely with Network Rail on this complex project, which is expected to get approval to carry passengers under full ETCS level 2 control in August.

Other examples that Nick mentioned were factory-assembled modular signalling, mathematical proving and auto-verification models that can replace scarce design and test resources for deployment elsewhere and improve safety by removing the human interface and making extensive use of off-site testing.

After a slow start, Nick felt that the industry was waking up to the possibilities of traffic management which overlays existing systems. This requires any new equipment to be digitally enabled. He felt that all these potential increases in capacity, reliability and availability could improve the passenger experience but might move the problem elsewhere in the end-to-end journey. For this reason, Siemens and others are investing heavily in the Government’s ‘Smart Cities’ initiative.

Rail is a complex industry, and Nick was clearly supportive of the Hansford review. He felt that there was strong support from the private sector to invest both funds and expertise to improve the delivery of infrastructure upgrades and accelerate innovation by adopting a mature approach to whole-life management of the infrastructure, providing a step change in the passenger experience.

Nick had personal experience of public-private partnership – as an engineer, he had found them hugely rewarding and he was sure that the rail industry could get there.

All in all, this Rail Exec Club meeting was both an enjoyable and fascinating experience, with three speakers who all see the need for a step change in the way things should be done and who offered some solutions. Their messages need to be listened to, and what better way to do this than over an enjoyable lunch.