Rail Engineerby rail engineers... for rail engineers
Facebook
Twitter
Home Rail News Nokia: What has it got to do with rail?
FeaturedRail NewsRail ProjectsSignalling and TelecomsSPONSORED FEATURE

Nokia: What has it got to do with rail?

To many people, Nokia is only associated with that old mobile phone that’s in a drawer somewhere, probably with a flat battery. However, Nokia today is one of the world’s leading telecommunication network and system providers, both in fixed, radio and software-defined networks to both service providers and enterprises. Nokia are probably the only true global provider of e2e solutions covering fixed, radio, software and services.

Signalling and telecommunications engineers on the railway will associate Nokia with the programmable digital multiplex ‘drop and insert’ transmission equipment that was the backbone of many resignalling schemes over 25 years ago. These copper and fibre cable-based transmission systems were very advanced for the time, with the ability to be managed and configured centrally or locally via software-handheld terminals (this was before laptop computers were widely available).

Such remotely configurable systems are now commonplace in most industries and railways, but Nokia was years ahead in its approach and was providing digital systems decades before ‘digital’ became the buzzword, both in society and rail.

Today, Nokia is still involved in rail and is the global GSM-R (including ETCS deployment), LTE (Long Term Evolution) and IPMPLS market leader, in terms of the number of commercial networks and length of operated GSM-R lines. Nokia GSM-R is deployed in 20 countries, serving more than 73,000 km of railways. The company has long been a key driver in the development of the GSM-R standard and provides a complete GSM-R portfolio of equipment, from cab radios and handheld shunting terminals to the radio access and core network elements. This includes fixed and microwave transmission, dispatcher equipment and network-management systems.

Nokia is also a market leader for 4G LTE equipment and is one of the leaders in developing 5G technology. This means it is ideally placed to provide rail with the best communication solutions and, because it is involved in virtually all the available technologies, it has no vested interest in providing rail with the technology it just happens to provide and support. And, with its extensive resources, Nokia will be available to support systems throughout its lifetime.

Outside of rail, and in the wider telecommunications industry, Nokia operates in a wide field of diversified customers and industries. Nokia has, for some time, been expanding its mobile transport portfolio for the 5G era to address the complex and diverse challenges of mobile infrastructures.

Its ‘anyhaul’ mobile transport solutions are built upon Nokia’s experience in mobile, microwave, IP, optical and fixed access technologies. The solutions aim to support the massive 5G scale of connectivity, bandwidth and low latency, with the dynamic programmability of service provision via cloud-based applications. Nokia takes security very seriously and it has a ‘security by design’ mindset in place across its portfolio, as well as a discrete security capability.

From paper to GSM

The origins of Nokia go back to Finnish engineer Fredrik Idestam, who set up a wood pulp mill in Southern Finland in 1865, taking the first step in laying the foundation for Nokia’s capacity for innovation in technology. Sensing growing pulp product demand, Idestam opened a second mill a short time later on the Nokianvirta River, inspiring him to name his company Nokia AB.

From its beginnings as a paper mill operation, Nokia has found success in several sectors over the years, including paper products, rubber boots, tyres, cable, mobile devices, and telecommunications infrastructure equipment. It has been producing telecommunications equipment since the 1880s – almost since telephony began – so the company’s experience in research and development is one of the best in the industry.

In the 1960s, Nokia became a conglomerate, consisting of rubber, cable, forestry, electronics and power generation businesses, resulting from a merger of Idestam’s Nokia and Finnish Cable Works, a phone and power cable producer founded in 1912.

The diversity and success in different industries over the years has mirrored Nokia’s geographical rise from a Finnish-focused company until the 1980s, to a European company in the early 1990s, and on to become a truly global company from the mid-1990s onwards.

In 1982, Nokia introduced both the first fully digital local telephone exchange in Europe and the world’s first car phone for the Nordic Mobile Telephone analogue standard (1G). The breakthrough of GSM (2G) in the 1980s introduced more efficient use of radio frequencies and higher-quality sound. The first GSM call was made with a Nokia phone over the Nokia-built network of a Finnish operator called Radiolinja in 1991.

By 1998, Nokia was the world leader in mobile phones, a position it enjoyed for more than a decade. In 2007, Nokia combined its telecoms infrastructure operations with those of Siemens to create the Nokia Siemens Network joint venture, later buying the Siemens stake in NSN.

The acquisition of Alcatel-Lucent in 2016 positioned Nokia as an innovation leader in next-generation technology and services, which included the addition of Bell Labs of North America. This deepened the company’s activity into state-of-the-art network telecommunications and widened its global reach. Today, Nokia routers are used at the core of the BT digital network.

Nokia has an unrivalled track record in innovation. This includes: over 1,300 patent applications, eight Nobel Prizes, four Turing Prizes, two Grammys, one Emmy and an Oscar! In terms of market share, they are the world’s number 1 in copper access technology, number 2 in 4G and edge routing, and number 3 in services (source Dell’Oro’s Q3 2017 market share reports and Analysys Mason full year forecast 2016).

In North America, Nokia owns Bell Labs, founded by Alexander Graham Bell and with over a hundred years of experience of research and development. Referred to as ‘The Idea Factory’ or ‘The Crown Jewel’, Bell Labs is, arguably, the world’s leading research organisation in information technology and communications.

From the enabling infrastructure for 5G and the Internet of Things, to emerging applications in virtual reality and digital health, Nokia is a company that is equipped to shape the future of technology to transform the human experience.

The evolution of GSM-R

Open standards drive down the costs of developing and deploying technology and Nokia has, for many years, been a strong advocate of open standards to promote interoperability to help eliminate the boundaries of technology, vendors and national frontiers.

Now that all GSM-R interfaces have been specified and standardised, operators have access to an open, interoperable and international system that drives competition and affords considerable savings.

There is joint activity within UIC, the European Union Agency for Railway, ETSI and 3GPP to define a telecommunications system capable of replacing GSM-R and known as FRMCS (Future Radio Mobile Communication System). Nokia believes that LTE is the most suitable candidate under current standardisation activities. However, the change to LTE will require extensive technical and regulatory standardisation to achieve the necessary functionality, interoperability and a seamless migration from GSM-R.

Nokia’s advice to railway operators is to invest in LTE ahead of the completion of standardisation in order to gain the benefits of valuable applications that require higher bandwidth than today’s GSM-R can offer, whether on-board trains, track-side or in stations.

LTE and the road to 5G

At the heart of the Nokia LTE family is the Flexi Multiradio 10 base station. This is the world’s smallest high-capacity, software-defined, multi-technology base station and the small cells it can provide result in easily scalable, cost-effective capacity. The base stations can be deployed stand-alone or to create a zone covered by a cluster of low-powered access points connected to a local controller.

In 2016, Nokia launched its next generation AirScale Radio Access solution. This is an entirely new way to build radio access networks using any architecture topology to deliver services with unlimited capacity scaling and market-leading latency and connectivity. The solution supports all radio access technologies – 2G, 3G, 4G LTE and with Wi-Fi integrated – all of which can be run simultaneously in the base station.

So, what about the role of 5G in railway communication?

There are many in the industry talking about the huge benefits that 5G technology offers for rail, especially in the area of efficient connected rail, the Internet of Things and service management. Other promises of 5G cover the huge capacity gain and the extremely low latency – which can be expected to be initially deployed in 2020 after finalisation of the definition and standardisation phase.

Nokia’s view, however, is that LTE can already deliver today the requirements for efficient train operation and enhanced travel experience, and therefore LTE is the right choice and a futureproof investment for railway operators.

LTE can fully cover the typical narrowband services, like IoT, that are primarily applicable to rail operators, while the definition of 5G is targeted for wider-spectrum use. In the future, 5G, Wi-Fi, satellite or other technologies may play a complementary role for boosting capacity for specific situations on top of LTE with extremely high bandwidth requirements, but these are likely to be far more than railways require.

Another important factor for the technology selection is the available dedicated frequency spectrum for rail operators, which will certainly be defined rather in the narrow band area of below 10MHz than in higher bands of 5G. Even if the higher bands of 5G were used for rail, there would have to be far more radio sites than are used for GSM-R.

However, as Nokia is simultaneously at the forefront of the LTE market and leading the definition of 5G technology, it is well placed to support the rail industry, whichever evolution path it travels down to replace GSM-R. With more than 30 years of experience in the sector, and the most complete portfolio of products and services, Nokia is the market leader in GSM-R, with over 80 mission-critical railway networks deployed around the world.

Rail Engineer looks forward to reporting more on the exciting technology Nokia has available for rail in the next few months. This includes how the railways extensive copper cable network could be used to deliver high bandwidth IP links trackside, using equipment that already connects 10 million homes worldwide to the internet.

Read more: Is hydrogen the answer?

Paul Darlington joined British Rail as a trainee telecoms technician in September 1975. He became an instructor in telecommunications and moved to the telecoms project office in Birmingham, where he was involved in designing customer information systems and radio schemes. By the time of privatisation, he was a project engineer with BR Telecommunications Ltd, responsible for the implementation of telecommunication schemes included Merseyrail IECC resignalling.

With the inception of Railtrack, Paul moved to Manchester as the telecoms engineer for the North West. He was, for a time, the engineering manager responsible for coordinating all the multi-functional engineering disciplines in the North West Zone.

His next role was head of telecommunications for Network Rail in London, where the foundations for Network Rail Telecoms and the IP network now known as FTNx were put in place. He then moved back to Manchester as the signalling route asset manager for LNW North and led the control period 5 signalling renewals planning. He also continued as chair of the safety review panel for the national GSM-R programme.

After a 37-year career in the rail industry, Paul retired in October 2012 and, as well as writing for Rail Engineer, is the managing editor of IRSE News.

TRS Become the First Hirer In The Rail Sector To Switch to HVO Fuel.

Total Rail Solutions, the complete rail service provider, has made a significant announcement that will see the company become the first hirer in the...
Read more
Company News

Would you like to work with like-minded people who want to make a difference in their towns, cities and wider society? As our North West...
Read more 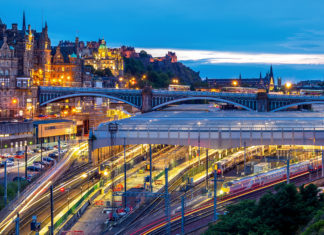 TRS Become the First Hirer In The Rail Sector To Switch...