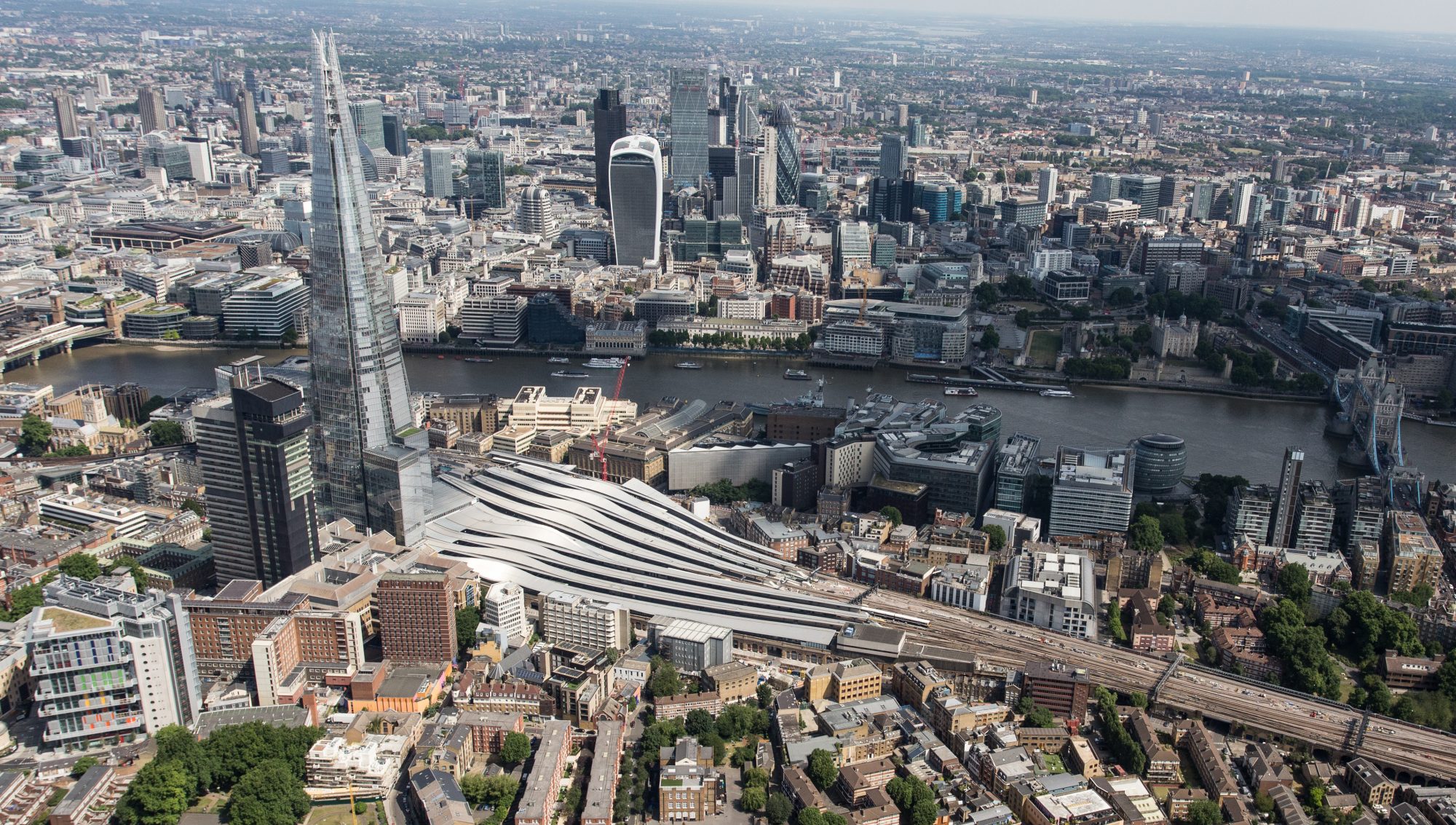 Long blockades of major stations at public and bank holiday times have become part of rail engineering custom and always attract media attention, most of it critical. Is this adverse press comment justified?

Rail Engineer went to see what was happening at London Bridge during the recent blockade period, to see at first hand what was actually involved and the steps taken to minimise disruption to the travelling public.

The blockade commenced on Saturday 26 August and lasted until Sunday 3 September.

During the first weekend, all lines were closed except one (which was signalled for reversible working) to allow limited access to some platforms on the low level (Central) side of the station. No trains could access the high level (South Eastern) platforms, thus necessitating the closure of Charing Cross and Cannon Street stations.

Fortunately for intending passengers, there were alternative train services from most places in Kent and Sussex into Victoria or Blackfriars. From Bank Holiday Monday, all low level lines and platforms were re-opened as were the lines through the high- level section of the station to Cannon Street, but trains did not call at the associated platforms as work on these and the street level concourse extension will not be finished until Christmas. On Saturday 2 September, test trains were operating through the station and onwards to Charing Cross with a limited timetable operating on Sunday and a full service at the start of the working week on Monday 4 September.

London Bridge past and present

Issue 154 (August 2017) contained a detailed article on the London Bridge project, but it is worthwhile reiterating the reasons behind this massive project and the benefits that will come about.

The high-level side had six platforms plus one through line, all of which extended onwards through the notorious Borough  Market Junction to either Charing Cross or Cannon Street termini, historically being part of the South Eastern and Chatham Railway.

Some cross-connections between the two sides south of the station allowed off-peak Caterham and Tattenham Corner trains from Charing Cross to route towards New Cross Gate and East Croydon.

This layout and arrangement was never ideal but the operators became slick at making the best of a bad job as the cost and scale of improving the throughput was considered prohibitive. Two major changes to train services forced the situation to be resolved. Firstly, the advent of the Thameslink south-to-north cross London service, initially achieved at minimum cost by reopening the Snow Hill link to Farringdon, routed additional trains across the connection from low-level to high-level lines just outside London Bridge station, thus creating more flat junction conflict and further pressure on the platforms used by the Charing Cross services. It was deemed impossible to path Thameslink trains through London Bridge in the peak hours, forcing them to be routed on to the much slower line via Tulse Hill and missing out the important interchange at London Bridge.

Secondly, the new grade-separated junction at New Cross Gate on to the revamped East London line to Whitechapel and the Docklands area, and the through services over this route now provided by London Overground, has caused a reduced need for inner suburban trains to access the low-level terminal platforms.

This resulted in surplus capacity on the low level and a serious shortage of capacity and throughput on the high level. If Thameslink was ever to achieve the status of a cross city RER type line, then something would have to be done.

The ultimate result is to equip London Bridge with nine through platforms on the high level with 1, 2, and 3 broadly leading to Cannon Street, 4 and 5 dedicated to Thameslink and 6, 7, 8 and 9 serving the route to Charing Cross. At the terminal platforms, these have been reduced to six (numbers 10 to 15), the work here being essentially complete.

There are 11 parallel access lines to the south of the station, which in future will broadly allocate lines 1 to 3 for Cannon Street trains, 4 and 5 for Thameslink, 6 to 8 for Charing Cross trains and 9 to 11 for trains into and out of the terminal platforms. Some lines are signalled for reversible working, thus catering for peak flows in opposite directions. Crossovers do permit trains to access different platforms from those listed above to cater for signalling failures, maintenance work or any other eventuality.

The project has been ongoing since 2013 and, regrettably, the Thameslink trains have had to use the Tulse Hill route to reduce the number of trains using London Bridge station. Since then, the low-level station has been totally rebuilt, the high-level platforms have been demolished and rebuilt in altered locations, an extra two tracks have been added through Borough Market Junction round to Charing Cross and a grade-separated junction has been constructed at Bermondsey to allow Thameslink trains unfettered access to Platforms 4 and 5. Most of the civil construction work is now complete, except for the final building extension in the street level concourse.

The first blockade in December 2014 involving the lines into the low level platforms was a watershed, as the planning process failed on a number of counts and significant disruption was caused for a short period of time, giving rise to very irate passengers and questions asked in Parliament. Quickly sorted, it was recognised that future blockades had to be planned down to the minutest detail and subsequent work has gone without any adverse consequences.

Particularly large blockades took place over the August and Christmas 2016 periods that permitted three new platforms to be commissioned for the lines to Charing Cross and the bringing into use of the Down Sussex slow line through the Bermondsey dive under. A full description of these works was given in issue 142 (August 2016) and 148 (February 2017). Not all work needs a full blockade, with many items of lesser activity being carried out during short possessions at weekends.

As has been said, the work has taken place over a nine-day period. It has to be recognised that the entire railway between New Cross, on the SE routes, plus New Cross Gate on the Sussex routes, through London Bridge station and Borough Market to Metropolitan Junction and up to Blackfriars, has been entirely rebuilt. It is, in effect, a brand new railway. This has meant slewing lines to different positions whilst other lines are built or re-laid with the necessary provision of temporary crossovers and associated signalling.

The first Saturday and Sunday saw new crossovers brought into use that enabled greater connectivity between the low and high-level lines such that, should any problem arise with access lines 9 to 11, the trains can be routed via line 8 into and out of the low level platforms. On Bank Holiday Monday, lines 1 and 2 were re-opened to allow SE trains to operate into and out of Cannon Street, this being an acceptable alternative to Charing Cross for the remainder of the week.

The Up and Down Kent Fast lines, temporarily located where the Thameslink lines 4 and 5 will go, have been put in to their final position on lines 7 and 8, leading in to Platforms 6 to 9 which, with the opening of Platform 6, gives four platforms for Charing Cross services, two Up, two Down.

Line 6 has been partially brought into use to give more flexibility on the country end approaches to the high-level station. Lines 7 and 8 are now diverted through the Bermondsey dive under, thus freeing the way for the Thameslink lines to be constructed into platforms 4 and 5 later on. Several new crossovers have been required in all of this, with some earlier ones being removed.

The revised track layout has to be accompanied by signalling alterations, the area being controlled from the Three Bridges Railway Operating Centre (ROC). This has involved changes to the Siemens Westlock interlocking as well as reprogramming the Charing Cross panel at that location. Signalling testing is a vital part of this process, and cannot be carried out until all new trackwork and signal installation is complete. The testing thus becomes a critical path, with Siemens staff being entrusted to do this under Network Rail supervision. In all, around 200 new signalling assets were added or altered which included 50 new signals, 23 point ends and 60 track circuits together with TPWS units.

Connecting all of the new signalling infrastructure back to Three Bridges makes use of the Network Rail Telecom FTN (fixed telecoms network) fibre-based network and the associated Thameslink Signalling Private Network (known, unsurprisingly, as TeaSPooN) to give complete dedication, diversity and resilience.

The meeting with Rail Engineer took place in the site depot located at New Cross Gate and affectionately known as the War Room. To ensure commonality of purpose, the depot is used by staff from Network Rail, Balfour Beatty (for all civil work) and Siemens (for signalling). Just being there to see the wall charts filled with diagrams and project tasks gave reality to the scale as to what had to be done. Every site and every work package had each individual activity listed with the time, work content and progress duly logged. Viewing the method of measurement revealed that any critical items would be shown in red but a quick scan of the charts did not seem to have any red items showing. If nothing else, it instilled confidence. Other subcontractors engaged in the work are MPI for testing support, Vital Rail and Pod-Track for track labour, Sonic Rail Services for conductor rail integrity and Cleshar for electric traction equipment.

A novel feature was a huge TV screen at the depot linked to various pole-mounted cameras positioned strategically at the critical work sites. With pan, zoom and tilt facilities, the project engineers could see at first hand what was happening at every location and issue instructions or guidance accordingly. The eight-day blockade utilised nine engineering trains, three tampers, 15 road-rail machines, two rail cranes, one road crane and 6,000 shifts. 10km of new track was effectively installed. Site walk-throughs by the project leaders made sure that nothing had been overlooked and that the correct standards of workmanship had been achieved. A 55-page booklet was prepared, covering all the safety and security requirements as well as details of the possession and work packages, so no-one could later claim they had not been fully briefed.

The final blockade and ongoing work

Whilst the end is now in sight, one more big blockade is planned for Christmas 2017. This will bring into use the Thameslink lines over the Bermondsey dive under, new Platforms 4 and 5 for Thameslink services, the commissioning of the new double track Metropolitan Junction leading up to Blackfriars, the completion of the street level concourse, re-opening the platforms for Cannon Street services together with the associated signalling and operating changes.

The old London Bridge Power Box will remain in control of the Lewisham area and the Hayes branch interlocking until the 2018 May bank holiday, when control will transfer to Three Bridges ROC. Similarly, the Angerstein interlocking area, covering the Greenwich lines, will transfer at Easter 2019 and the Hither Green to Grove Park area in March 2020. Thereupon, London Bridge Power Box will close.

Thameslink trains will again be routed through London Bridge sometime in 2018, whence Automatic Train Operation will be introduced on the central core across London. That will bring its own challenges, but at least all the civil and signalling infrastructure will be in place.

Thanks to Mark Somers, the Network Rail project director, and his team for their time during this busy period and to Alexandra Swann, communications manager – Thameslink for facilitating the visit.