Home Rail News Life is not a rehearsal… but pumping concrete can be! 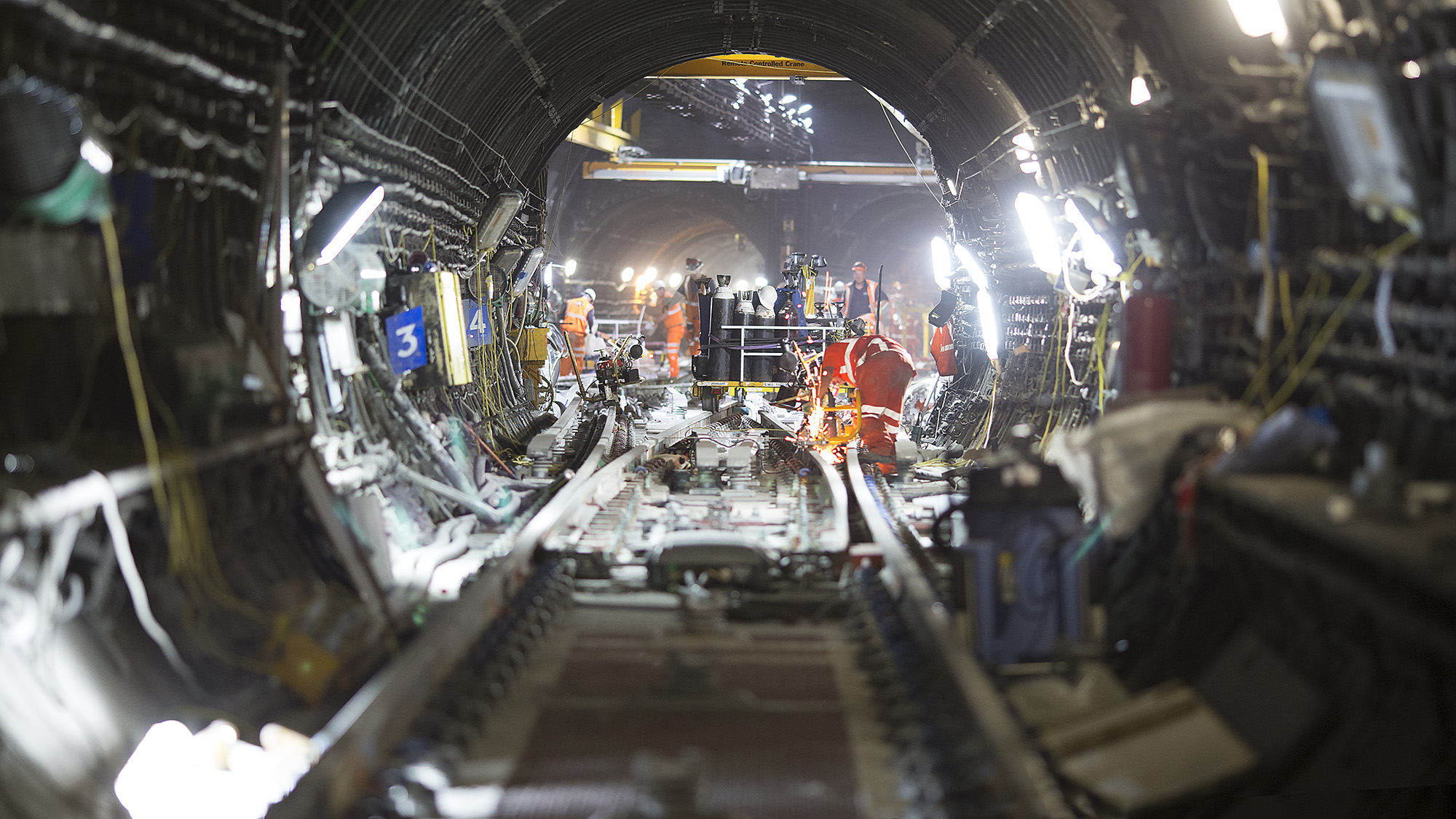 While crafting an article for Rail Engineer, many of us rely on the old adage ‘a picture is worth a thousand words’. In fact it’s not that old apparently – maybe only dating from the early part of the last century. But regardless of where the saying came from and when it emerged into common usage, it’s certainly true that the images that we carry of complex and exciting engineering save us a whole load of effort when it comes to searching for the right word or phrase. Quite frankly, on occasions, they can be a handy cop-out.

However, both pictures and words are silent. And they have no texture. They rely on the reader to fill in the noise, the dust, the clamour, the heat.

So, look closely at our images of the work that took place beneath the streets of Walthamstow this summer. Concentrate hard and add in your own overlays of sound, heat and humidity and dust. If it helps you can always put on a respirator, goggles, gloves, ear defenders and wrap up really warmly just to get the right effect. Perhaps though, it could be difficult turning the pages of this magazine, so the gloves can come off.

The Victoria line was built in the 1960s. It was cutting edge technology – a marvel of the emerging electronic age. The trains, to all intents and purposes, ran themselves – or so it seemed to the general public. They were shiny and silver and contrasted with some of the other stock on the underground which still had guards taking their chances in the rear compartment – a smoking compartment to boot!

The trackwork kept pace with the times, but wasn’t shiny and, of course, it was out of sight. At Walthamstow – the end of the line – the track arrangement ended in a scissors crossover. For the non-pway engineers, this is a compact and complex track arrangement where terminating trains arriving at the crossover from the south in the northbound tunnel can be routed into either of the two platforms at Walthamstow Central, then routed back from either platform into the southbound tunnel.

The crossover, installed in the 1960s, was on timber bearers set in a slab of concrete and was due for renewal in 2017.

But gaining momentum, and indeed overtaking the renewal date, the project was to increase the number of trains through the whole of the Victoria line to 36 trains per hour by 2016. The crossover therefore had to include this capability. Previously the line could only meet 32 tph through the centre of London by turning back trains at Seven Sisters station.

The capacity of a railway sometimes has less to do with the running lines and signalling, and a great deal more to do with train terminating and turnround arrangements. Ultimately, it’s often the ends of a railway that determine line capacity. So it was at Walthamstow. The existing crossover was able to accept trains at 32kph (20 mph). Although a respectable speed, it just wasn’t high enough to secure the rapid movements required.

Careful survey work of the tunnels checked every millimetre of available space – especially length. The new crossover design is a technical step-change in that it involves the use of Sonneville Low Vibration Track (LVT) – a track system embedded in slab concrete. The point ends have been taken as far as practicable into the tunnels to achieve the longest possible crossover length. Coupled with new components, the maximum speed has been raised to 60kph (35 mph) – enough to secure the required turnround and the 36 trains per hour throughout the line.

The Victoria line carries 200 million passengers per year and so any decision to shut a section of the line has to be taken with a great deal of thought. Replacing the crossover like for like – changing components on a piecemeal basis in the few hours available every night – could not achieve either short or long-term aims. The componentry needed upgrading as well as the geometry, and neither of these aspects could be achieved simply by changing the odd component here or there. The line had to be shut so that the new layout and its support structure could be installed and tested in a manner that would give years of uninterrupted reliable service.

In the lead up to the main blockade, preparations were made to facilitate the works by installing a bespoke overhead crane capable of handling all the heavy items during the blockade and which would remain insitu afterwards.

The new track layout is fixed in a new concrete slab. Thus the old rails and timber bearers had to be taken out along with the concrete in which they were embedded and on which they sat.

Track Partnership involved London Underground’s internal Track Delivery Unit (TDU), which has had many years of experience with taking out old track support systems, and their input was invaluable. The old concrete had been laid on a dry joint with what is termed the ‘engineer’s’ level – that which came with the tunnel! This is a distinct layer down to which the breaking operation took place.

A number of techniques for slab demolition were used, one of which involved the quarry technique of concrete bursting. Cores were drilled in advance of the main blockade ready for the insertion of hydraulic expanding wedges. This method rapidly allows the controlled removal of large pieces of concrete with the minimum of noise, dust and debris. They also used heavy mechanical plant and had to resort to hand-held equipment only for the most awkward areas.

Meeting the engineering tolerances required meant the breakout had to be to absolutely right. This involved some determined scabbling with a boom-mounted piece of equipment to get the base concrete flat and level. Dust, noise and ventilation were a constant challenge. Forced ventilation took fumes and dust away from the station area to a ventilation shaft. Dust was suppressed as far as possible with constant water spray. This work was entrusted to 4-rail, a company that specialises in scientific and environmental services.

Once the old concrete had been taken out and levelled, the new layout was unloaded from a material train and precisely assembled in its final line and level. The overhead crane paid dividends ensuring as little disturbance as possible. With the ironwork in place, it was carefully checked for final alignment to millimetre tolerances, then wrapped in polythene before the final concreting, so avoiding the need to chip concrete off the newly-laid track.

At this point, John was keen to emphasise that the concreting exercise had been thoroughly rehearsed. Not at Walthamstow of course, but at Acton depot where a section of track was concreted using the same pumps, the same techniques and within the same space and time restraints.

The golden rule is never to be taken by surprise. A blockade of one of the busiest tube lines in London is not the best time to test out your concrete pumps!”

Over a 20-hour period, some 50 concrete lorries from two nearby Hanson depots ferried concrete to the three pumps that operated continuously.

In order not to paint themselves into a corner, the team started in the single bore tunnels before working through the main crossover area. After another 20 hours, the concrete had cured sufficiently for the first engineer’s train to run through.

Thereafter, point machines were installed by LU signal engineers, along with the aluminium Brecknell Willis conductor rails. With signal circuitry tested, it was time for the traction power to be switched on for the running of test trains.

Despite the team having spent the best part of a day ‘hoovering’ up as much dust as they could find, the test trains found more! It took nearly another day for dust levels to drop to a level acceptable to the travelling public.

But, even so, the whole blockade, scheduled for the 23 days, was handed back about a day and a half early.

What did the travelling public see of all this effort? Not a lot. They saw a car park, some of which had been commandeered to provide contractor working space. They saw a great many buses. They might have seen a squad of concrete lorries, pumps and steel tubes leading down into a ventilation shaft, but very few of them would have known what they were looking at – let alone what was going on for their benefit down below their feet. What will they see in the future? More trains! A record 36 trains per hour will run end to end on the line from 2016, making the Victoria line the UK’s highest frequency railway.

By now, your face mask and goggles will have misted up, the temperature caused by your extra layers will have risen and hopefully all the extra sensations should have helped to convey to you the working environment hidden away down below the car park at Walthamstow.

Perhaps the images have been worth a thousand words. Your extra clobber might have added a few more. Time now to take it off and enjoy the rest of the magazine!