Issue 164 – Electrification can be affordable

This month we focus on the benefits of electrification and how it can be delivered at an acceptable cost. For example, our ‘Why electrify?’ feature shows that, when diesel driven, current bi-mode trains have only two-thirds the traction power of their electric mode.

Chris Grayling’s parliamentary statement cancelling various electrification schemes included the comment that “bi-mode trains can improve journeys without the need for electrification”. Yet, as a recent National Audit Office report revealed, when he decided to cancel these schemes, he was advised that bi-mode rolling stock with the required speed and acceleration did not exist. To use a term coined by the Trump administration, Grayling’s comment was an alternative fact.

A significant factor in his decision was the almost-threefold increase in GW electrification costs. There are many reasons for this, from which it is important to acknowledge mistakes rather than assign blame. In this way, the lessons learnt can ensure that future electrification can be delivered in a cost-effective manner. One such mistake was over-engineered OLE structures, as is evident in comparison with continental high-speed lines and previous UK electrification.

Yet, during a recent inspection of the GW electrification scheme, Rail Engineer was advised that its structures were deliberately chunky as lightweight East Coast electrification equipment was prone to weather extremes. This is another alternative fact. Rail Engineer understands from various sources, including one of its previous route directors, that East Coast wiring problems were primarily due to lack of maintenance. Furthermore our ‘Getting electrification right’ feature explains how the GW OLE structure design issues have been acknowledged and addressed.

This feature describes the good work being done by Network Rail’s engineers and the Railway Industry Association to show how electrification can be delivered at half the cost per mile of the GW electrification scheme. This is not just a theoretical aspiration, as electrification is currently being delivered at, or below, this lower cost in Scotland and Germany, where there is a steady rolling programme.

In contrast, the historic UK feast and famine approach to electrification drives up costs. It is due to dramatic swings in Government policy, which can have a disastrous effect on companies that have invested in an apparently expanding electrification programme.

Another factor driving this approach is the need to have the full route ready for its new electric train fleet as soon as possible. Now bi-mode trains enable routes to be electrified on an incremental basis and thus offer the flexibility to facilitate a rolling electrification programme.

Britain has less of its railway electrified than other European countries, which therefore get greater benefits from environmentally friendly, more-powerful electric trains that are cheaper to run. If the UK is to fully realise these benefits, the government has to be convinced.

In this respect, Mark Carne’s statement that “we’ve discovered the cost of electrification of the network is very expensive” is unhelpful, as it implies the only thing wrong with recent electrification projects was their cost estimates. This comment undermines the work done by his engineers and project teams where they have shown affordable electrification can be delivered.

Network Rail should correct this statement as part of an industry campaign to promote the benefits of electrification and its affordability. Although this is understood by the Scottish Government, if Westminster can’t be persuaded, further significant electrification in the foreseeable future is unlikely and the work done to reduce electrification costs will have been largely in vain.

Work is also being done within Network Rail to reduce signalling costs, as Paul Darlington explains in his feature on the latest version of a modular signalling system that was recently commissioned in North Wales.

Digital railway signalling has been in the news recently. Clive Kessell explains the significance of the first Automatic Train Operation of a Thameslink passenger train whilst Nigel Wordsworth reports on the high-profile launch of the National Digital Railway Strategy. Part of this is the commitment to digital-ready conventional signalling schemes, which we explain in a separate feature.

The digital glue of telecommunications that binds the Digital Railway was the subject of a presentation by our writers Clive Kessell and Paul Darlington at the recent Technology Summit. This, and much else, is featured in Stewart Thorpe’s report on this event.

New innovations featured amongst the many things seen at Infrarail. For those who weren’t there, or just ran out of time to see everything the show had to offer, we have two features which include the show’s impressive speakers and a description of the exhibition stands, including their oddities and novelties.

At Old Oak Common, as one depot closes to make way for HS2, another has just opened to service Elizabeth line trains. Graham Coombs reports on how this depot is an environmental example for the future.

Although such best practice is laudable, traction energy has the greatest potential to improve the railway’s green credentials. Whilst batteries and hydrogen have their place, as we explain, electrification is the only way to achieve significant environmental progress on intensively used lines. Electric trains have no emissions at point of use and around half the CO2 emissions of diesel trains, with the potential for further reductions as renewables generate more electricity. This is yet another benefit of electrification that Government needs to understand. 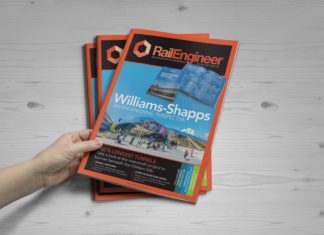