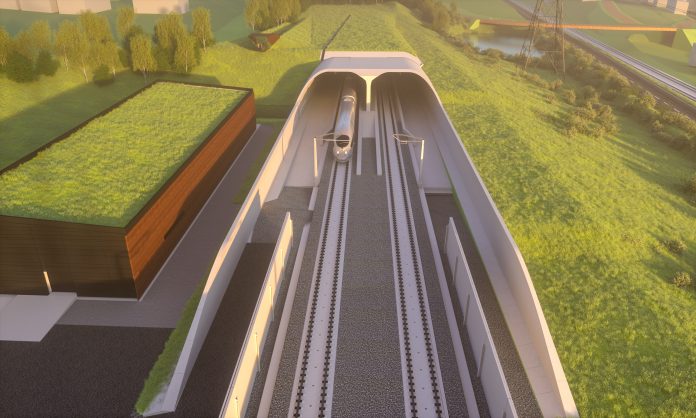 Now, what are the similarities between Cyrano de Bergerac, the central character in the 1897 play of the same name by Edmond Rostand and a modern Japanese high-speed train?

Perhaps they’ve both got panache. Cyrano de Bergerac did indeed have panache, Rostand having introduced that very word into the English language. Undoubtedly, the Japanese train also has panache – or panasshu.

What else? They both have very long noses, but whereas Cyrano de Bergerac was born with a long nose, the Japanese high-speed train had its nose specially designed – and designed for a very specific purpose.

The train has to travel very fast.

But there’s a problem here. Take a look at the latest images of the trains proposed for HS2. They too have to travel very fast – just as fast as, if not faster than, their Japanese counterparts. The HS2 trains also have panache, but their noses are far more ‘Audrey Hepburn’ in comparison. So, what is going on? Why have the very savvy Japanese embarked on such prominent nose jobs whilst the Brits are so nasally understated?

A bit of background

The Shinkansen  railway was a ground breaking achievement. Opened in 1964, in time for the Tokyo Olympics, it took high speed rail travel to a new level. Speeds of 210km/h in commercial passenger service had not been seen anywhere in the world.

Everything was new – both the rolling stock and the infrastructure and, as it turned out, the aerodynamic effects. The trains were streamlined to minimise drag in the open air and through the (many) tunnels, which were conventional tubes through the ground.

When the railway was extended in the 1970s, those living near the portals of one of the new tunnels were disturbed by loud bangs that occurred a short while before a train emerged. Technically, these are known as micro-pressure waves. To the press, they quickly became known as ‘sonic booms’. Something had to be done.

The engineers quickly analysed the problem and realised that they had to slow down the build-up of pressure in front of the train before it entered the tunnel mouth. To do so, they designed and retro-fitted hoods for the tunnel portals that would guide the air as the train entered. Without these measures, the pressure wave would build up too quickly and, after travelling down the tunnel bore at the speed of sound, would emerge at the other end.

The world learnt from the Japanese experience and just about all of the long tunnels on subsequent lines have been fitted with hoods of one pattern or another.

As a result of this experience, sonic booms are something that designers of all high-speed lines are mandated to avoid. This, of course, includes HS2.

As HS2 chief engineer Mark Howard is keen to point out: “We don’t want to find there’s a problem only when the first trains start to run.”

Having an iron grip on all aspects of the project specification will ensure that the problems encountered on the Nuremberg-Munich high-speed railway in Germany will not occur.

The emission of micro-pressure waves depends on both tunnel length and on the effects of friction. A design change from ballasted track to slab track inside two of the longer tunnels, Euerwang (7,700 metres) and Irlahüll (7,260 metres), reduced the surface friction and led to sonic booms occurring near the portals of both tunnels. Measures had to be taken to stop this phenomenon before the line could open in 2006, and acoustic absorber panels were fitted between the rails.

High speed lines that have been built to date have, in broad terms, a maximum line speed of up to 320km/h. HS2 is being designed to run at a maximum of 360km/h. On the face of it, this may not seem to be a significant speed increase – just 12½ per cent.

However, the physics of micro-pressure wave propagation is such that they increase in proportion to the cube of the speed – and by more than the cube in longer tunnels. A quick calculation suggests that the relatively modest 40km/h increase in speed leads to at least a 42 per cent increase in effect. Mitigating this would be way in excess of the capability of existing tunnel hood designs and so a new solution is required – one that has to be carefully calculated, modelled, designed – and verified.

As we covered in a Rail Engineer article back in issue 160 (February 2018), Arup and Birmingham University are at the forefront of tunnel aerodynamic research, using a mix of scale model testing and computer modelling to verify and optimise tunnel designs. The university’s scale model test-rig catapults model trains down a 150-metre-long track in a huge shed at British Rail’s former research centre in Derby. Scale models of the tunnel and hood are placed over the track to measure the performance of the proposed design.

Whilst it is possible to make train and tunnel models to 1/25 scale, it is not possible to scale down our atmosphere or its physical properties. However small the model trains, speed through the air has to be full-scale if the results are to read across directly to the full-scale tunnel. The catapult isn’t quite powerful enough to manage 360km/h – but it is still blink-and-you-miss-it fast, and plenty fast enough to see that, in principle, the design works as intended.

Leading the team is Richard Sturt, an Arup Fellow whom we met during the preparation of our previous article. Richard has considerable experience in the application of fundamental physics to engineering problems, along with knowledge of the strengths and weaknesses of computer modelling.

“HS2 will have hoods that are longer than in Germany or Japan because of our higher speeds and tight tunnels,” he explained. “To make a really efficient design, we’ve used an idea by Prof Alan Vardy (one of the world’s leading academic experts in the field) to shape the hood so that it smoothly narrows down from quite a big entrance to meet the main tunnel without any sudden changes of cross-sectional area.

“Then there are many small holes along the length of the hood which let the pressure out in a very controlled way, so dissipating it very smoothly, without any sudden changes.”

Standards – or lack of them

There is a difference between the treatment of micro-pressure waves and pressures experienced on a train by passengers. As Mark explained: “The standards for passengers inside the train are designed to give a backstop if a window were to break, so exposing passengers to the pressure outside. That would be very much worse than the normal operating scenario when they’re seated in a nice comfortable train.

“Standards apply to the emergency rather than the normal condition. Mandatory requirements are in the standards for interoperability.

“Nothing covers the micro-pressure waves.”

Noise levels generated by HS2 are embedded in the Act of Parliament that authorised the project, but this is wheel/rail/aerodynamic noise arising from the running of trains. Despite there being hundreds of papers written on the subject of micro-pressure waves at tunnel portals, there is practically nothing that defines the levels that are acceptable. What constitutes a nuisance in some circumstances will be benign in other cases. An audible thump at the dead of night in rural surroundings will cause many more issues than one in an industrial estate.

This vexed problem has been researched in Japan and resulted in a rule of thumb – what people find tolerable and what not. Rules in Germany are based on measurements made on a sound meter.

Given the dilemma of ‘guessing’ what noise level would be acceptable, Mark’s team made the decision to opt for a design that eliminated the noise altogether – or at least to sound frequencies below the capability of the human ear. The HS2 designs will give rise to pressure changes that may well be detectable using instrumentation, but nothing will emerge into the open air that will be within the audible range.

All this explains the difference in approach by the Brits and the Japanese to train design. The physics of sonic booms is the same wherever you are on the planet. It’s just that HS2 has the opportunity of designing and building new tunnel hoods to avoid the pressure build-up with speeds of 360km/h. A 100-metre tunnel hood is relatively straightforward to build.

The Japanese started early with their high-speed lines and so their infrastructure is, by and large, fixed. They had little alternative but to change the trains.

As stated earlier, the micro-pressure wave effects increase by the cube of the speed and so, if there’s little hope of altering the tunnel hoods, then it’s down to the front of the trains to do their part. But the effect is also dependant on the length of the nose, which is why the newest, and fastest, Japanese trains have the longest noses. Ramp up the speed to 360km/h, and the nose would need to be too long to manage.