HS2 has launched its procurement process looking for specialist contractors to deliver the Overhead Catenary System (OCS) for the electrification of the new high-speed railway line between London, Birmingham and the north of England.

This rail systems contract – worth an estimated £300 million – is the latest in a series of procurement opportunities for rail systems, following on from the competitions for track, signalling and operational telecommunications that have already been launched.

The winner of the OCS package will be responsible for additional stages of design as well as manufacture, supply, installation, testing and commissioning of the systems. OCS will be a single stage procurement, with the successful bidder delivering two separate contracts covering Phase One and Phase 2a – from London to Crewe, where HS2 services will join the existing west coast main line.

The system will cover 589 single track kilometres, including 62 viaducts, 293 bridges and 15 tunnels. The successful bidder will be responsible for design and will be expected to work closely with HS2’s other rail systems suppliers to ensure integration of its design and throughout construction, testing and commissioning.

HS2 will use the state-of-the-art V360 OCS design range under licence from SNCF Reseau – the first system in Europe to be certified for speeds of up to 360km/h. The licence agreement allows the OCS contractor to go to the components market to find the most competitive supplier, opening up opportunities for smaller suppliers across the UK.

A shortlist is expected to be announced in the summer with contract award in 2022.

HS2’s procurement and commercial director, David Poole said: “Our state-of-the-art rail systems will allow HS2 to run fast, frequent, high capacity services across the network – offering low carbon travel options for millions of people across Britain. The overhead catenary is a vital part of the project and the successful bidder will play a crucial role in keeping the HS2 network running safely and reliably.”

Earlier this week, HS2 also launched contract opportunities worth an estimated £498m, covering Tunnel and Lineside Mechanical and Electrical equipment across Phase One and 2a. This includes the tunnel services within the shafts, tunnels and cross-passages and low voltage power services and distribution in the open route.

A shortlist is expected to be announced towards the end of the year, with contract award in 2022.

Legislation to build Phase 2a (Birmingham-Crewe) is currently in the Lords with Royal Assent expected later in the year. All of the recent rail systems contract opportunities have included provision for work on 2a, with contracts expected to be signed once the legislation is in place. 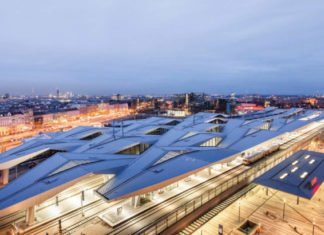