The railways have a knack with names. Generally they are eminently descriptive, evoking in a word or short phrase the very nature of the location. Think perhaps of that desolate curve on the main line north of Darlington called Linger-and-Die. Or maybe the various Factory Junctions throughout the country. But sometimes names are deceiving.

This month we visit Dove Holes. And what does that conjure up? Idyllic ruralism? Well, think again. Dove Holes village is an ‘ordinary’ strip of development on the A6 just south of Buxton on the edge of the Peak National Park. It has a station. It’s a couple of platforms with bus shelters, but that’s on the passenger line that winds its way up from Stockport. Deep beneath Dove Holes is Dove Holes tunnel on the old main line to London.

It is 2984 yards long and it is not a particularly pleasant place. Driven through gritstone and limestone, it saw off several contractors in its construction. The discovery of three subterranean rivers just about put the tin lid on everything. Dove Holes tunnel is synonymous with water. It’s not just the rivers but also the run-off from the hills and the quarries in the area. Added to this is a pernicious limestone slurry that finds its way down the track drains into the tunnel where it gradually reverts back to a modern sedimentary rock. The original builders did at least recognise that they had a problem and so incorporated a very large drain down the middle of the tunnel. But regularly, over the years, this became choked and so water made its way down the 1 in 90 gradient taking whatever route it could find. At first through the ballast and then, when that’s clogged, it’s over the top of the ballast. In other words, Dove Holes tunnel floods and at times the flooding is spectacular.

So that’s the background. A track formation beset with too much water and very little drainage. In short, it’s a track maintainer’s nightmare. By the time Gary Hastie, Network Rail’s Scheme Project Manager, and his team arrived on site the track had just about had it. A 5mph speed restriction was causing serious disruption to the Freightliner limestone traffic not to mention the ever-present worry for the track engineering staff. There had been a number of previous attempts to solve the problems of Dove Holes but these had been variously postponed. The tunnel was firmly in the ‘too difficult box’.

Although the remediation project was primarily driven by track renewals, there were significant civil engineering elements in the form of 1000yds of drain renewal. In addition there was a need to correct the structural clearances that had been disrupted over the years. The renewals, the drainage and the gauge works were all interlinked.

The original scheme involved a proposed nine-week blockade, but Gary entered into new negotiations with customers Freightliner and DBS and work was broken up into manageable chunks in extended rules of the route possessions and main possessions on the weekends prior to and after Christmas. But over the holiday break the project team were allowed a nine-day blockade. Network Rail Operations, and in particular Operations Manager Dave Ramsbottom, were instrumental in helping the team maximise the access opportunities negotiated.

The Christmas blockade became available because that’s the time that the Cemex quarries shut down. Gary admits that the date was accepted reluctantly – primarily because of the risks of bad weather. High up in the Peak District the weather can be atrocious. But given the inevitable, the team managed the potential risks accordingly by breaking the job down into smaller parts.

The original drain structure was a stone culvert with thick roof slabs buried under the ballast. Seemingly of generous proportions it succumbed to a mixture of the limestone slurry, occasional nudges from track laying plant and plain old age. Attempts had been made to relieve matters with the insertion of plastic pipes laid in the remains of the culvert but these too were now overwhelmed. The solution demanded by the track maintainers, and designed by Babcock Rail Consultancy, was for an open channel drain 1 metre deep and 700mm wide laid so that the galvanised lids can be removed for drain cleaning. In addition, cess drains in the form of gutters have been installed to pick up the acute areas where the tunnel lining leaks, taking the water to the six foot channel.

This of course created a challenge to reinstating correct structural clearances through the tunnel as the channel drain in the six foot was a physical obstruction that didn’t occur with a buried pipe – except at catchpits. As a result the final track renewal required the use of EG47SD (shallow depth, short ended) concrete sleepers.

Babcock Rail are partners in the IMT (Integrated Management Team). They sub-contracted the civils works to BAM Nuttall who engaged QTS to carry out the drainage work with their extensive range of plant and equipment. The bespoke reinforced concrete units were made by Macrete and were shipped over from Ireland.

To have some chance of success, the water coming into the tunnel was stopped by intercepting it at catchpits at the upstream mouth of the tunnel and pumping it into a local stream called Dale Brook. But there was still plenty of water from within the tunnel that had to be managed and 40 metre stretches were pumped around the moving worksite. The Down line was first removed and excavated to within 70mm of final depth. Gary Hastie commented: “There were constraints with wagon availability over Christmas but we were able to excavate the drain, placing spoil onto the exposed track bed. After Christmas, more wagons became available which allowed the final depth to be reached. It was always likely that there could be surplus excavated material and so contingency measures such as creating temporary stockpiles were planned.”

In the weeks before the main blockade there were exploratory forays into the tunnel to test out working techniques and logistics. But Dove Holes came up with a cruel surprise. The six foot drain did not run down the centre of the tunnel! It was offset and, for part of its course, ran under the Down line. This meant that there was more excavated material than anticipated.

The pre-Christmas possessions gave the opportunity to install necessary services. The radio communications system, by High Motive, gave coverage throughout the tunnel and the surrounding areas. Ventilation in the shape of powerful Mantra fans kept the tunnel clear of fumes. For the blockade most of the tunnel was lit. Early in the project, brackets were fixed to the walls so that the lighting and the cables could be fixed quickly.

At both ends the line is in deep rock cuttings before the portals are reached. At the Southern (Peak Forest) end the access is close to the possession limit and this disturbs the normal working of the quarry trains. The main access was established from a field that had been rented off a farmer at the Chinley end of the job near Chapel-en-le-Frith station approach. From there, having signed on, all personnel were ferried to the site of work on the ‘taxi’ – a road/rail personnel carrier supplied by TRAC.

Gary was impressed the way everyone coped with the very difficult conditions. The tunnel isn’t a pleasant place to work and there are areas where water pours into the tunnel from the roof and from the side walls. They noticed that, just three hours after heavy rain on the Peaks, it starts to rain in the tunnel.

And the weather? “Right on cue there was heavy rain, initially before the start, but then the weather faired up until the Thursday when it poured down again.”

Like their Victorian ancestors, the project team had a problem with the subterranean water courses. At one point we had fourteen hours of extremely heavy rain and we had no option but to keep well clear and go back to a 40 yard portion which was completed after Christmas.”

The largest river is visible at a point where there appears to be a refuge, but this refuge has iron bars across precisely to stop you getting in. Water pours from way above the tunnel and disappears into the six foot drain dramatically increasing the flow.

In the early days of the work, the water that had to be diverted around the site was almost overpowering. At its peak, QTS had three 6” diesel pumps running full bore just to keep pace with the torrent that emerged from the tunnel walls. As Bruno Martin, QTS’s Construction Manager observed, “It was a challenge to keep on programme because of the sheer amount of water. But we perfected a conveyor belt type of approach and were able to increase our productivity steadily as the days went by. The tunnel gradient falls steeply towards Chinley so, as we worked upstream towards Peak Forest, we had less and less water coming down on us.”

So perhaps Dove Holes can now take on a slightly less malevolent guise. Six thousand yards of track has been either renewed, lowered, realigned or tamped. The drain has been replaced. Water flows where it should and all is undeniably tidy. Gary admits that “To see it all completed was a bit of a proud moment.”

But don’t kid yourself. At around 1000ft above sea level in a bleak corner of the Peak District, Dove Holes tunnel is still a terrible place to be in the winter. Always treat railway names with caution! 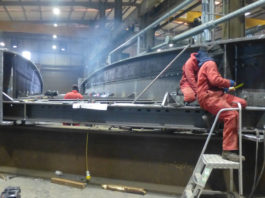 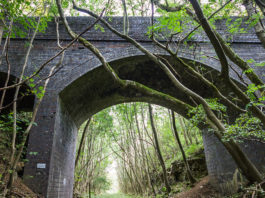 Delivering benefit from our legacy assets 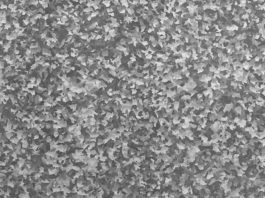