Railway electrification provides faster and reliable train journeys compared to those of diesel trains and a strong reduction of pollution in busy stations and the countryside. However, many national programmes for the electrification of new and existing railway lines have required a substantial investment for the railway infrastructure.

This is because railway electrification uses AC single-phase power that requires connection to high-voltage transmission lines, which are not always available in the intended places where the railway feeder stations should be located and usually require complicated and extremely expensive modifications of the existing layouts.

New AC electric railways are not seen favourably by the transmission operators as they introduce negative phase sequence current and intermittent load peaks that affect the stability of the system, especially for future scenarios where the inertia of the power system will be substantially reduced for the widespread adoption of renewable power sources.

There is currently a need to find suitable and cheaper alternatives to traditional electrification systems that do not rely on connection to the high-voltage transmission system and allow the integration of renewable power sources and energy storage.

The typical power level of heavy railways and even high-speed railways are in the range of 100-500MVA, with individual supply points designed for a peak-power of 50-100MVA, which is compatible with the typical capabilities of medium-voltage distribution systems. However, innovative railway feeder stations need to be based on technologies that do not introduce any phase imbalance to the distribution network.

Passive and active methods are available to reduce or eliminate the imbalance. Passive solutions alternate the phases that supply each section of the track. The major drawback of this solution is the requirement of neutral sections ensuring electrical isolation between consecutive sections of the track. V-V, Le-Blanc or Scott transformers can further reduce the imbalance, but they are effective only for specific loading conditions. As a result, they are not ideal solutions for the connection to power distribution grids.

Active solutions use power electronics converters operating together with, or in substitution of, the main power supply equipment in the feeder stations. Traditional methods use the power converters as power compensators – they inject a negative phase sequence current in phase opposition with the one drawn by the railway, so that the current supplied by the utility grid is balanced. More advanced solutions are instead based on replacing single-phase transformers with full-size power converters, operating at either the same or a different frequency of the power grid.

An established technology is based on Static VAR (volt ampere reactive) compensators (SVCs), albeit they require large filters for the additional harmonics introduced by the thyristor switching. More recently, static synchronous compensators (STATCOMs) have been introduced. As they are switch-mode power converters operating with switching frequencies higher than those of thyristors, they require passive filters relatively smaller than those of SVCs. STATCOMs can be connected to the three-phase grid or the single‑phase overhead line and use a conventional two-level or three-level H-bridge topology. In East Asia, STATCOMs have been used in conjunction with V-V and Scott connected transformers to the phase imbalance of the railway.

An alternative electrification system, called co-phase power supply, is a hybrid solution between a STATCOM and a full static converter. It uses a static single-phase to single-phase power converter and an impedance matching balance transformer, which acts as a three-phase to two-phase converter.

The aim of the control system is to inject the appropriate current to filter harmonics and eliminate the negative sequence on the three-phase supply. Unlike STATCOMS, the converter of the co-phase supply can also supply active power directly to the load. At present, a prototype feeder station has been built in China and the trials undertaken so far have shown improvement on the power quality of the supply.

The co-phase system has been further improved into the advanced co-phase power supply in which one three-phase transformer, connected to the railway line through the static converter, is added in parallel to the existing single-phase transformer and controlled to supply active power to the trains and to balance the three-phase current on the grid.

In this scheme, single-phase transformers are replaced by static converters that convert the three-phase power of the grid into the single-phase power for the railway. The power conversion can be either direct (AC/AC) or with an intermediate DC link (AC/DC and DC/AC).

Feeder stations with full-size static converters draw a nearly sinusoidal balanced current at nearly unity power factor. This is the technology widely used for all the countries operating with railway frequencies different from 50Hz. However, it is now becoming attractive also for 50Hz railways for the possibilities of longer feeding distances and better control capabilities compared to traditional feeding arrangements.

The static converter has an independent control of the input currents on the three-phase side and a regulated voltage on the single-phase side. Therefore, the utility grid can be fully isolated from nonlinear traction loads, like legacy locomotives that use diode or thyristor rectifiers.

The control of the voltage on the single-phase side also allows the synchronisation of the output voltages of multiple feeder stations, thus creating a continuous overhead line without neutral sections. Therefore, the electrified network would have a feeding arrangement similar to DC railways, where multiple feeder stations simultaneously supply the trains.

At the present state of the art, DC electrified lines are already connected to medium voltage power distribution grids, as the DC voltage is generated by a three-phase diode rectifier that draws balanced current with high power factor. However, the level of the DC voltage is limited to around 3kV for the limitation on the maximum short-circuit breaking current of circuit breakers, which in turn limits the maximum capacity of the railway. A higher voltage of the power supply would also pose problems for traditional traction system of the trains, which operates at voltage levels of a few kV.

The recent introduction of new multilevel topologies now allows the design of reliable medium-voltage static converters that could be used for DC railway electrification. The advantages are being connected to a lower voltage drop for the DC operations of the line, enabling longer feeding distances, lower power losses for the lower resistance of the conductors and higher capacity for the lower currents on the line.

The main challenges are the need of suitable protection schemes to deal with short-circuit currents and the need of power electronics-based DC transformers on board of trains to replace traditional transformers. Both of these are under development, and valuable input can be taken from other research fields, mainly HVDC transmission and medium-voltage DC power distribution.

The new concept of medium voltage DC railways would fit very well with a future vision of electric railways better integrated with power distribution networks, especially for the possible interconnection with renewable power sources and energy storage, which typically operate with DC power.

Written by Pietro Tricoli, a senior lecturer in electrical power & control at the University of Birmingham and a member of the Birmingham Centre for Railway Research and Education.

Read more: The past, present and future: A look at electrification of the UK’s railways 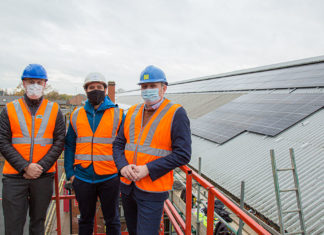