The Power Signal Boxes of the 1960s and 70s were mostly associated with the rationalisation era; four tracks down to two, singling of lines, reduction in switch and crossing layouts, often single leads into terminal stations. Whilst these may have saved money, the operating flexibility was decimated and train service opportunities were thus limited with performance suffering.

The modern Control Centres now being introduced are invariably coupled with new layouts that often reinstate the trackwork of 40 years ago to create the capacity that the current railway demands. One such project recently authorised is at Cardiff, where not only is the existing signalling equipment life expired but the shift in local employment patterns has greatly swelled the commuting population into the city centre.

The Cardiff scheme plugs the gap between the earlier Port Talbot East project from Baglan to Llanharan commissioned in 2007, and the first phase of the Newport (Monmouthshire) project from Pilning through the Severn Tunnel and Newport to Ebbw Junction introduced progressively during 2010 and 2011.

The heart of the scheme is the new Wales Railway Operations Centre (WROC) at Cardiff Central. This is the equivalent of those recently commissioned at Didcot, Derby, Cowlairs and elsewhere and will be the nerve centre for all train operations in Wales. The project embraces not only the South Wales main line but includes the commuter lines that feed into the city, including:

• The Rhymney Valley route, which is double track from Cardiff Queen Street to Bargoed and single line on to Rhymney including the single line branch to Coryton and the freight only branch to the open cast mine at Cwmbargoed;

• The Treforest line from Ninian Park to Radyr and the Llandaff line from Cardiff Queen Street North Junction to Radyr where a fringe to the Rhonda lines will exist;

• The Vale of Glamorgan (VoG) line from Bridgend to Barry (reopened to passengers in 2005) via Rhoose, the station for Cardiff Airport and the Barry line from Barry Island to Cardiff West Junction including the Penarth branch;

• The vital link between Cardiff Central and Queen Street plus the short single line to Cardiff Bay. The Central to Queen Street Valley lines corridor will have an enhanced capacity from 12 to 16 trains per hour at peak times in each direction.

Some changes in layout are planned, the first being the junctions between the main and relief lines east of Cardiff. These will be moved from the constricted east approach to Central station out to Longdyke with 75mph points allowing faster entry into the down platforms at Central station. Bi-directional signalling will be provided on all four lines between Cardiff East and Longdyke.

At Tirphil, on the single line section between Bargoed and Rhymney, a platform loop will be installed to enable a half hour service. At Caerphilly, a new bay platform will be built aimed at facilitating the 16 trains per hour service through Cardiff Queen Street, where a disused platform on the west side will be reinstated and a new bay platform built on the east side for the Cardiff Bay shuttle service. A new station entrance will also be built at Queen Street to facilitate access to the new platforms.

At Cardiff Central, a new platform is to be built on the south side where a new south entrance to the station will be provided. Barry station will have a new back platform loop to be dedicated to the Barry Island service. The Treforest curve out towards Radyr will be made double track and extra signals plus line speed improvements will be provided on the City Lines to Radyr so as to increase capacity.

The commissioning phases of the project will cover two years:

• January 2013 – The VoG line where re-control of the existing signalling will allow closure of Cowbridge Road and Aberthaw boxes;

• June 2013 – The Valley lines from Rhymney to Cardiff Bay with the closure of Bargoed, Ystrad Mynach and Heath boxes;

• January 2014 – The Barry lines and towards Cardiff West from Queen Street with the closure of Barry box although Radyr will remain a fringe box to the WROC;

• May 2014 – East from Cardiff to the Newport boundary including some transfer of control from the existing Cardiff PSB;

• Christmas 2014 – Cardiff Central station westwards to the Port Talbot boundary and including the closure of the old PSB and St Fagans gate box.

With the WROC already built and in operation for the Newport project, incorporating the Cardiff area will largely be by adding more of the same equipment and systems, although there will be some significant differences.

The centralised interlocking will be an additional eight units of the Westlock interlocking product from Invensys making a total of thirteen in all. However, where the signallers’ work stations for the earlier projects were WestCad, it has been decided to use a GETS (GE Transportation Systems) product for the Cardiff area. So as to make this similar in operation to WestCad, minor modifications have been carried out as a result of formal HAZID (Hazard Identification Study) workshops with all stakeholders. One significant change for GE will be having the system controlled via a tracker ball as opposed to the normal mouse operation. Distribution of the interlocking data links will be by the Fixed Telecom Network (FTN) giving full resilience by diverse routings to every lineside device.

A big difference for the Cardiff operation will be the total use of ARS (Automatic Route Setting). This will be an enhanced system known as ARS+ and sometimes called the Signallers’ Assistant. The facility will be available for all timetabled moves including entry and exit from depots and berthing sidings. As such, the workload of the signaller will decrease and only three extra work stations are planned for the entire Cardiff area as compared to the four for Newport, plus a supervisor position. All train moves will be controlled automatically. Signaller intervention should only be necessary for unplanned moves and at times of service disruption.

New technology is being introduced within the project to reduce costs and provide improved reliability. Signals will be of the standard Dorman LED type where steel cross portal structures are to be used, but others will be the new lightweight variant design of post and signal head. The main line and busier branches will be 3 aspect with signal spacing aligned to the aspiration for future line speed improvements. This will enable considerable savings to be made. Only on the main line approaches to Newport and Cardiff will 4 aspect signals be used so as to give better regulation of speed reduction into the platforms. On the lighter loaded branches, 2 aspect signals in discrete block sections will be sufficient.

Points will primarily be equipped with In-Bearer Clamp Locks utilising the Hy-drive system for the higher speed switches. Where points remain unchanged, either standard Clamp Locks or HW2000 point machines will remain. In the areas that currently have mechanical signalling, HW2000 machines will be used, these being reliable and familiar to the local staff.

Train detection will be entirely by axle counter but using a product from Frauscher, an Austrian company, where a safety case is well advanced based upon cross acceptance of existing usage in continental Europe. Trials are taking place in both AC and DC electrified areas (Rugby and Farlington) to prove suitability of operation in the UK. The big advantage is that no rail drilling is needed, the unit being clamped in place on to the rail.

During the early GRIP 5 design phase, Atkins and Network Rail utilised the 3D aerial survey completed at GRIP 4 to ascertain whether the Cardiff Central and West areas could be fitted with axle counters and thus remove the original intention to use track circuits. This allowed more efficient assessment by using desk top analysis. Only two of the 109 sections required an actual site visit. The system will need its own distribution network using Westermo modems operating over dedicated star quad cables with diagnostic reporting and diversity being achieved by use of the Network Rail FTN.

Level crossings in the area are of varying types. At Rhoose, the CCTV controlled barriers will be renewed with transfer of control to the WROC. The barriers at St Fagans, St Georges and Llantrisant are all relatively new so only the CCTV control will transfer to the WROC thus permitting St Fagans gate box to close. The AHB (automatic half barriers) at Pontsarn will remain unchanged as will the AOCL (Automatic Open Crossing, Locally Monitored) on the minor road into the Ford factory.

Power provision will be by the standard 650V lineside cables being fed through Principal Supply Points backed up by a UPS. Telecommunications requirements still call for SPTs at every signal even though the GSM-R radio network will be available by the time of project implementation. The WROC concentrators will use the Siemens HiPath product, well proven in other centres.

Network Rail will take on the role of principal contractor using the hub and spoke contracting mechanism. The main contractors will be:

• Signalling – Atkins for all the design, construction and test & commissioning, subcontracting to Invensys for Westlock equipment and data preparation, and GETS for the work stations; TRE (The Railway Engineering company) to design and provide the ARS system and the simulators for signaller training;

• Telecoms – Siemens at York for the FTN upgrades needed for interlocking and axle counter circuits plus SPT and miscellaneous telecom requirements;

• Power and Distribution – Atkins for the design, build and commissioning of all supply points, point heating systems and various lighting solutions including on-going monitoring;

• Permanent Way – Balfour Beatty for all the track and S&C work;

• Station Buildings – BAM Nuttall for the new entrances and platforms at Central and Queen Street;

No separate contract is envisaged for Passenger Information System requirements, the existing equipment being adapted / expanded on a station by station basis via the relevant station contracts.

A joint project team of Network Rail and Atkins is located in Milford House, Swindon. The Atkins resource will be supplemented by design staff in Bangalore, Birmingham and Croydon. A co-located site construction office and depot is established at Newport. Atkins expects to have a core team of 40 people supplemented by around 45 installation staff and 35 testers at peak per shift.

Most work will be done using weekend and mid week possessions. 52 hour possessions are envisaged for the earlier commissioning phases and a Christmas blockade will be needed for the main Cardiff Central Phase in 2014. Some residual work will continue into 2015, including the opening of the new platform at Cardiff Central. The programme is challenging but achievable and significant work by all contractors has already started on-site. Off-site testing is envisaged for all of the signalling location and REB equipment assemblies.

The project cost is around £220 million, being primarily funded by Network Rail, the DfT and the Welsh Government, but also including private funding parties.

Electrification has been approved for some time on the main line from London to Cardiff but recent announcements have extended this to Swansea and the Welsh Valley lines. The signalling and telecom systems have therefore to be immunised against traction interference.

ERTMS will also be installed on the GW main line in the midterm future. As far as is possible, the new signalling is being designed with this in mind but the capacity of the interlocking may be a crucial factor. ETCS compatibility is called for in the contract.

In parallel with the Cardiff project, a new station at Energlyn, north of Caerphilly, has been agreed and any passive provision of any signalling adaptations needed for this has been taken into account within the main project.

The next two and a half years are going to be a busy time, but with the enthusiasm and co-operation that is already being shown, this project looks set fair to succeed in all respects.

Thanks go to Richard Angove, senior project engineer, Network Rail and Conor Linnell, programme manager Wales and West region from Atkins, for their help in preparing this article. 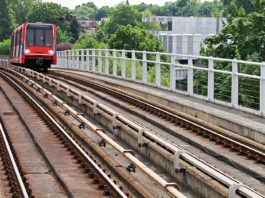 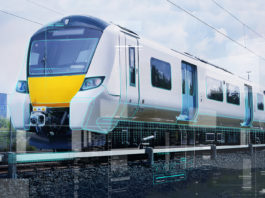 A question of confidence 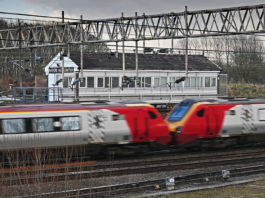