The £600 million redevelopment of Birmingham’s New Street Station is heading for an important milestone in the next few months. The first phase of the new station concourse will be opened to the public in April 2013, and the existing concourse will be shut off so that it, in turn, can be remodelled and upgraded.

Regular readers will have been following the New Street story over the last few years, but for newcomers here is a short outline of the programme.

Birmingham New Street is the busiest station outside London, and the busiest interchange station in the UK, with a train leaving the station every 37 seconds. All of the platforms are below ground level, making it technically an ‘underground station’, which has implications in terms of the levels of fire retardance in the structure and in the need to remove people quickly from the site in case of trouble.

Over 140,000 passengers use New Street every day, more than double the number it was designed to cater for. This obviously makes the station overcrowded, but the fact that the twelve platforms are in one underground box, which cannot be enlarged, limits planners’ options in deciding how to overcome those problems.

At platform level, the decision was taken to declutter the platforms, removing old waiting structures and other encumbrances, so that passengers could get on and off trains more rapidly. New lifts and escalators would move those passengers to and from the overhead concourse more quickly, and passengers waiting for a train would be held at concourse level rather than being on the platform getting in the way of people travelling on earlier trains.

However, this would increase the pressure on the concourse which was already a dreary, overcrowded place. A new concourse was needed, but without closing the existing one which would effectively shut the station.

Attention turned to the multi-story car park next door. The bottom floor of that was on the same level as the existing concourse, and it occupied a larger area. Plans were developed to turn the car park into a brand new concourse, and then switching passengers from the old one to the new one. The old concourse would itself be refurbished, and then the intervening wall removed to join both spaces up into one much larger area.

Of course, that’s a very simplistic outline. To get sufficient height in the car park for the new concourse area, the floor above had to be totally removed to produce a double- height void. The main service spine for the station ran alongside the car park wall adjoining the concourse, so would be in the way when the time came to join up the two areas. A new spine would have to be built which would service the larger area without getting in the way.

To get people into and out of the new concourse easily, all the taxi routes would have to be altered, a new drop off area constructed, and streets surrounding the station remodelled. There would also need to be a pedestrian route through the building, which would involve new steps and access, and to improve the station’s role as an interchange the city council requested an easy pedestrian route be constructed between New Street and the nearby Moor Street station.

All these changes would still give a concourse which, while larger, would have a comparatively low ceiling and so be quite dark and unwelcoming. Above the station is a shopping centre, the Pallasades, and some bright spark had the idea of totally removing the centre of the building up to the sky, allowing more light into the centre of the building and transforming the concourse into a light, airy space. This wouldn’t be as difficult as it might appear since the shopping centre was actually constructed as a nest of nine free-standing buildings in a square. Removing the middle one would have the desired effect without impinging too much on the surrounding eight. It was an inspired suggestion.

The outside of the station resembled a concrete box, so a firm of world-renowned architects came up with a scheme to clad the whole building in curved, swoopy mirror-finish stainless steel. This would reflect the sky and give the whole building an ethereal look.

Then, in February 2011, everything changed again. John Lewis Partnerships announced it would be building a major department store in Birmingham. This would cover 250,000 square feet over four floors, and would be on top of Birmingham New Street station! It was a welcome addition to the project, but it involved rearranging some of the facilities and a redesign of the external cladding.

Last time the rail engineer visited Birmingham, at this time last year, work was well underway. Over two years of hard work had resulted in the car park being hollowed out, the new service spine going in, various other works including the demolition of Stephenson Tower, a council-owned block of flats, being commenced. Cross Country Trains staff accommodation was being re- sited to leave room for the John Lewis store. Everything was buzzing.

This year, things were even busier with over 1,000 people on site, 24 hours a day, seven days a week. The deadline to open the new concourse is in April, which means it has to effectively be finished by March to allow time for staff training and the fitting out of retail outlets, so everyone is under pressure. Network Rail’s Ben Herbert and Darren Cobb were pleased to point out how much had been achieved in the last twelve months.

Externally, the Cross Country offices are now open in an impressive new block at the west end of the station. Stephenson Tower is down, and two new towers which will be the lift shafts for John Lewis are up – a third will follow. All the brackets and waterproofing for the fancy cladding has been installed on Stephenson Street and the stainless steel sheets are being bolted to it.

The Moor Street link is structurally complete and will be opened at the same time as the new concourse.

At platform level, work continues. One platform face at a time is being taken out of commission so that superfluous buildings can be removed, a new platform surface laid, and other work done. At the same time, equipment is arriving from Otis and Stannah as 36 new escalators and 15 lifts are being installed up to the new concourse.

Upstairs in the concourse, the new spine is in. It was built by NG Bailey as pre- tested modules which were then hung from the ceiling and joined together. All the connections hang from the bottom, making future alterations simple and convenient.

The walls and partitions for the retail units are going in. Interestingly, even the glass is being installed. This would normally be fitted later, but as the floor is likely to flex when weight is added, it is being done before the final screed is put down to avoid cracking. The screed itself will be made using a lightweight aggregate to keep loading to a minimum.

There will be two main areas to the new concourse. One is an open passage straight through the station while the other will be a ticketed area, protected by two gatelines, for fare-paying passengers waiting for their trains. The retail units which are located alongside the walkway therefore have a choice to make – do they face the public or the ticketed area? They can’t, of course, face both as otherwise fare-dodgers would nip through to avoid the ticket checks!

The blockwork for the through walkway is going down and lighting is being installed. Although it is still very much a building site, everything is at that point of the work when things will rapidly come together and there is nothing to suggest that everything won’t be complete on time.

Inside the Pallasades shopping centre there are partitions and temporary arrangements. The original plan was to retain the same feel as before but, now that John Lewis has come along, the whole retail area will be upgraded into a more up-market development and renamed Grand Central ready for the opening of the new store in 2014.

So it’s head down for April. the rail engineer will be back to see the changeover and to report on phase two when the existing concourse will get its upgrade to form part of the new, larger concourse at Birmingham New Street. 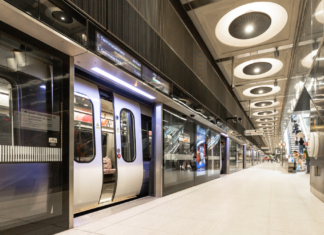